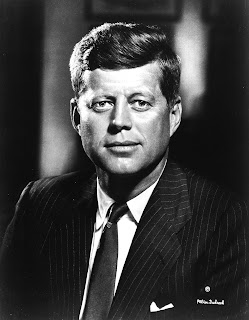 John F. Kennedy (born May 29, 1917) was the 35th President of the United States (1961-1963), and at age 43, the youngest man ever elected to the office. On November 22, 1963, when he was hardly past his first thousand days in office, JFK was assassinated in Dallas, Texas, becoming also the youngest President to die…

During his presidency, “responding to ever more urgent demands, he took vigorous action in the cause of equal rights, calling for new civil rights legislation. His vision of America extended to the quality of the national culture and the central role of the arts in a vital society. He wished America to resume its old mission as the first nation dedicated to the revolution of human rights.” (From Biography at Whitehouse.gov). “Through his actions and rhetoric Kennedy captured the hearts and minds of an entire generation of young people, urging them to participate in public life, engage with the world, and fight for equality.”*  This collection of favorite quotes reminds us of what it means to be an American, and of the national ideals that should still guide us in our political discourse and daily walk.

“Every time that we try to lift a problem from our own shoulders, and shift that problem to the hands of the government, to the same extent we are sacrificing the liberties of our people.” – Remarks at the Italian-American Charitable Society Dinner, Boston, April 22, 1950.

“[The goal of education] is the advancement of knowledge and the dissemination of truth.” -- Speech at Harvard University, June 14, 1956.

“It seems to me that the time has come for intellectuals and politicians alike to put aside those horrible weapons of modern internecine warfare, the barbed thrust, the acid pen, and, most sinister of all, the rhetorical blast. Let us not emphasize all on which we differ but all we have in common. Let us consider not what we fear separately but what we share together.” -- Id.

“Let every nation know, whether it wishes us well or ill, that we shall pay any price, bear any burden, meet any hardship, support any friend, oppose any foe to assure the survival and the success of liberty.” – Id.

“With a good conscience our only sure reward, with history the final judge of our deeds, let us go forth to lead the land we love, asking His blessing and His help, but knowing that here on earth God's work must truly be our own.” -- Id.

“Today we need a nation of minute men; citizens who are not only prepared to take up arms, but citizens who regard the preservation of freedom as a basic purpose of their daily life and who are willing to consciously work and sacrifice for that freedom.” -- Roosevelt Day Commemoration, January 29, 1961.

“Our Constitution wisely assigns both joint and separate roles to each branch of the government; and a President and a Congress who hold each other in mutual respect will neither permit nor attempt any trespass.” – First State of the Union Address, January 30, 1961.

“For I can assure you that we love our country, not for what it was, though it has always been great -- not for what it is, though of this we are deeply proud -- but for what it someday can, and, through the efforts of us all, someday will be.” --"Address to the National Industrial Conference Board," February 13, 1961.

“Victory has a hundred fathers and defeat is an orphan.” –quoting an old adage after the defeat at the Bay of Pigs, April 21, 1961.

“Freedom is not merely a word or an abstract theory, but the most effective instrument for advancing the welfare of man.” -- Message to the Inter-American Economic and Social Conference at Punta del Este, Uruguay, August 5, 1961.

“I think this is the most extraordinary collection of talent, of human knowledge, that has ever been gathered at the White House – with the possible exception of when Thomas Jefferson dined alone.” -- Remarks at a White House Dinner Honoring Nobel Prize Winners of the Western Hemisphere," April 29, 1962.

“This country cannot afford to be materially rich and spiritually poor.” -- Annual Message to the Congress on the State of the Union, January 14, 1963.

“A man may die, nations may rise and fall, but an idea lives on. Ideas have endurance without death.” -- Remarks Recorded for the Opening of a USIA Transmitter at Greenville, North Carolina," February 8, 1963.

“Liberty without learning is always in peril, and learning without liberty is always in vain.” – Speech at Vanderbilt University at the 90th Anniversary Convocation, May 18, 1963.

“Only an educated and informed people will be a free people.” – Id.

“In a time of domestic crisis, men of goodwill and generosity should be able to unite regardless of party or politics.” -- Civil Rights Address from the Oval Office, June 11, 1963.

“This Nation was founded by men of many nations and backgrounds. It was founded on the principle that all men are created equal, and that the rights of every man are diminished when the rights of one man are threatened.” – Id.

“All free men, wherever they may live, are citizens of Berlin, and, therefore, as a free man, I take pride in the words ‘Ich bin ein Berliner.’” – Id.

“A nation reveals itself not only by the men it produces but also by the men it honors, the men it remembers.” -- Remarks at Amherst College, October 26, 1963.

“Today we give our thanks, most of all, for the ideals of honor and faith we inherit from our forefathers—for the decency of purpose, steadfastness of resolve and strength of will, for the courage and the humility, which they possessed and which we must seek every day to emulate. As we express our gratitude, we must never forget that the highest appreciation is not to utter words but to live by them.” – Thanksgiving Proclamation, November 4, 1963 (He was assassinated just six days before Thanksgiving Day which was on the 28th).
________________________
*Editorial (2008, November 11). John F. Kennedy. Retrieved October 11, 2019, from https://www.shmoop.com/john-f-kennedy/