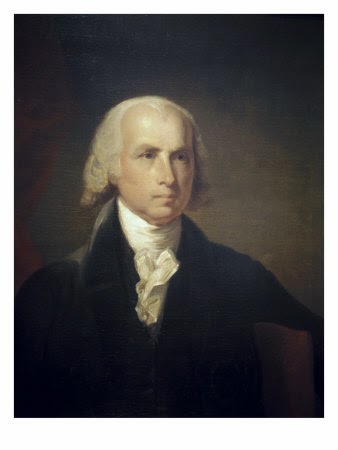 This essay offers the very simple argument that James Madison was a staunch advocate of limited government and individual liberty during the creation of the American constitutional republic.  He, like the other Founders, believed that as government assumed more authority, it endangered the rights and liberties of the people.

In his early public career in Virginia, Madison became a leading figure in the struggle for religious liberty.  A government that violated individual consciences with civil penalties was acting tyrannically and violating the sacred rights of man.  In the creation of the Virginia Declaration of Rights, which helped create a limited, republican government with the purpose of protecting liberty in the Virginia Constitution of 1776, Madison altered George Mason’s clause on religious tolerance to one of liberty of conscience:

That religion, or the duty which we owe to our Creator, and the manner of discharging it, can be directed only by reason and conviction, not by force or violence; and therefore all men are equally entitled to the free exercise of religion, according to the dictates of conscience

A decade later, Madison again supported limited government with the disestablishment of the Anglican Church in Virginia to protect this liberty of conscience, writing his Memorial and Remonstrance, in which he stated, “This right is in its nature an unalienable right.”   He led the legislative fight for the Virginia Statute of Religious Freedom, which achieved the goal of disestablishment, while Thomas Jefferson was in Paris.  Almost another decade later, he made the following argument in his essay, On Property:

Government is instituted to protect property of every sort; as well that which lies in various rights of individuals . . . .

More sparingly should this praise be allowed to a government, where a man’s religious rights are violated by penalties, or fettered by tests, or taxed by a hierarchy.  Conscience is the most sacred of all property . . . the exercise of that, being a natural and unalienable right.

That is not a just government, nor is property secure under it, where the property which a man has in his personal safety and personal liberty, is violated by arbitrary seizures of one class of citizens for the service of the rest.

During the 1780s, Madison wanted to give the national government more power because he believed the Articles of Confederation failed to achieve its ends, and, most critically, failed to protect liberties in the states.  When he helped frame the new Constitution at the Philadelphia Convention, defended it in his Federalist essays, and fought for its ratification in Virginia, he constantly sought a stronger, but limited government (of enumerated powers), that protected individual liberties.  Federalist #51 demonstrates Madison’s argument for limited republican self-government.  He states, “A dependence on the people is, no doubt, the primary control on the government; but experience has taught mankind the necessity of auxiliary precautions.”  Those precautions included a separation of powers, checks and balances, bicameralism, and federalism to divide and limit government power in order to protect individual liberty.

In the First Congress, James Madison was the guiding force behind the Bill of Rights, which had been promised by the Federalists during the ratification debate.  Although Madison did not earlier believe that a Bill of Rights was necessary because as he told the Congress on June 8, 1789, “because the powers are enumerated, and it follows that all that are not granted by the constitution are retained: that the constitution is a bill of powers, the great residuum being the rights of the people.”  Nevertheless, he became the main proponent of the Bill of Rights because,      “so far as a declaration of rights can tend to prevent the exercise of undue power, it cannot be doubted but such declaration is proper.”

In the 1790s, Madison generally joined with his friend, Thomas Jefferson, to resist what they believed were the unconstitutional centralizing tendencies of the Federalists.  Whether the Federalists supported monarchical policies as much as the Democratic-Republicans believed, and regardless of whether Madison reversed himself from his nationalist outlook in the 1780s (as some historians have accused), he continued his enduring commitment to limited government and protecting the liberties of the American people.  His Virginia Resolution, adopted by the Virginia Assembly in opposition to the Alien and Sedition Acts, claimed the government was exercising:

A power which more than any other ought to produce universal alarm, because it is levelled against that right of freely examining public characters and measures, and of free communication among the people thereon, which has ever been justly deemed, the only effectual guardian of every other right.

James Madison shared the vision of a constitutional republic with a limited government to protect the natural rights of mankind with the other Founding Fathers.  They believed that every person inherently possesses civil and religious liberties given to them by “Nature and Nature’s God,” which cannot be alienated by any earthly power.

Tony Williams is the Program Director of the WJMI, and the author of five books, including Washington and Hamilton: The Alliance that Created America (forthcoming, 2015)