The First Martyr to the Cause of American Liberty 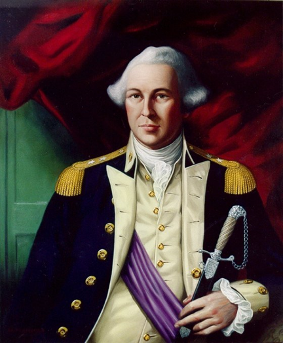 The first martyr to the cause of American liberty was Major General Joseph Warren (June 11, 1741 – June 17, 1775). The son of Joseph Warren and Mary Stevens, his father was a respected farmer. He enrolled in Harvard College, graduating in 1759, and then taught for about a year at Roxbury Latin. He then studied medicine and married 18-year-old heiress Elizabeth Hooten on September 6, 1764. She died in 1773, leaving him with four children: Elizabeth, Joseph, Mary, and Richard. Before his death in 1775, he was engaged to Mercy Scollay. Warren played a leading role in Patriot organizations in Boston during the early days of the American Revolution, eventually serving as President of the revolutionary Massachusetts Provincial Congress. Warren enlisted Paul Revere and William Dawes on April 18, 1775, to leave Boston and spread the alarm that the British garrison in Boston was setting out to raid the town of Concord and arrest rebel leaders John Hancock and Samuel Adams. Warren participated in the Battles of Lexington and Concord the following day – the opening engagements of the American Revolutionary War.
After the meeting of the Provincial congress at Concord in October 1774, Dr. Warren acted as chairman of the committee of safety, charged with the duty of organizing the militia and collecting military stores. As the 5th of March, 1775, drew near, several British officers were heard to declare that anyone who should dare to address the people in the Old South church on this occasion would surely lose his life. As soon as he heard of these threats, Dr. Warren solicited for himself the dangerous honor, and at the usual hour delivered a stirring oration upon "the baleful influence of standing armies in time of peace." The concourse in the church was so great that, when the orator arrived, every approach to the pulpit was "blocked up" and rather than elbow his way through the crowd, which might lead to some disturbance, he procured a ladder and climbed in through a large window at the back of the pulpit. About forty British officers were present, some of whom sat on the pulpit-steps, and sought to annoy the speaker with groans and hisses, but everything passed off quietly.
On Tuesday evening, the 18th April, 1775, observing the movements of the British troops, Dr. Warren dispatched William Dawes, by way of Roxbury, and Paul Revere, by way of Charlestown, to give the alarm to the people dwelling on the roads toward Concord. Next morning, on hearing the news of the firing at Lexington, he left his patients in charge of his pupil and assistant, William Eustis, and rode off to the scene of action. He seems to have attended a meeting of the committee of safety that morning at the Black Horse tavern in Menotomy (now Arlington), and there to have consulted with Gen. William Heath. By the time Lord Percy reached Menotomy on his retreat, Gen. Heath had assumed command of the militia, and the fighting there was perhaps the severest of the day. Dr. Warren kept his place near Heath, and a pin was struck from his head by a musket-ball. During the next six weeks he was indefatigable in urging on the military preparations of the New England colonies. At the meeting of the Provincial congress at Watertown, the 31st of May, he was unanimously chosen its president, and thus became chief executive officer of Massachusetts under this provisional government.
Warren was commissioned as a major general by the Provincial Congress on June 14, 1775. Several days later, in the moments before the Battle of Bunker Hill, Warren arrived where the militia was forming and asked where the heaviest fighting would be; General Israel Putnam pointed to Breed's Hill. Warren volunteered to join the fighting as a private against the wishes of General Putnam and Colonel William Prescott, both of whom requested that he serve as their commander. Warren declined the command in the belief that Putnam and Prescott were more experienced with war. He was among those inspiring the men to hold rank against superior numbers. Warren was known to have repeatedly declared of the British: "These fellows say we won't fight! By Heaven, I hope I shall die up to my knees in blood!" He fought in the redoubt until out of ammunition and remained until the British made their third and final assault on the hill to give time for the militia to escape. He was killed instantly by a musket or pistol ball in the head by a British officer.  The enemy stripped his body of clothing and he was bayoneted until unrecognizable, and then shoved into a shallow ditch and buried. His body was exhumed ten months after his death by his brothers and Paul Revere, who identified the remains by the artificial tooth he had placed in the jaw. His body was placed in the Granary Burying Ground and later (in 1825) in St. Paul's Church before finally being moved in 1855 to his family's vault in Forest Hills Cemetery.
General Gage reportedly said Warren's death was equal to the death of 500 men. It encouraged the revolutionary cause because it was viewed by many Americans as an act of martyrdom. His death, immortalized in John Trumbull's painting, “The Death of General Warren at the Battle of Bunker's Hill, June 17, 1775,” (see image below) galvanized the rebel forces.
At the time of Warren's death, his children were staying with his fiancée, Mercy Scollay, in Worcester as refugees from the Siege of Boston. She continued to look after them, gathering support for their education from John Hancock, Samuel Adams, Mercy Otis Warren, Benedict Arnold, and even the Continental Congress. He has been memorialized in the naming of many towns, counties, streets, and other locations in the United States, by statues, and in numerous other ways.
Posted by J. David Gowdy at 12:00 PM No comments: