True in the Crucible of Power 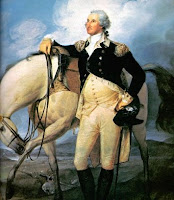 The year is 1783. The place is Newburgh, New York. After over six years of conflict and battles, the Revolutionary War is finally over. As a peace treaty is being negotiated in Paris with Great Britain, a perilous moment in the life of our new American democracy is occurring. Officers of the Continental Army are meeting to discuss their grievances and consider a possible revolt against Congress. They are angry over the failure of Congress to honor its promises to the army regarding salary, bounties and life pensions. The officers had heard that the American government was going broke and that they might not be compensated at all.
On March 10, 1783, an anonymous letter was circulated among the officers of Washington's camp. It addressed those complaints and called for a private meeting of officers to be held the next day, to consider possible military solutions to the government’s problems and its financial woes. When he learned of this, General Washington wisely forbade the officers from attending the unauthorized meeting. Instead, he suggested they meet a few days later at the regular meeting of his officers. Meanwhile, another anonymous letter was circulated, this time suggesting that Washington himself was sympathetic to their claims. Some of the officers wondered if Washington would lead them in another rebellion for their cause ….
And so, on March 15, 1783, Washington's upset and frustrated officers gathered in a church in Newburgh, effectively holding the fate of democracy in America in their hands. Unexpectedly, General Washington himself showed up. He was not entirely welcomed by his men, but nevertheless, spoke to them … He reminded them of their mutual sacrifices, and expressed gratitude for their “cheerful assistance and prompt obedience” while serving together in the war of independence. He pledged to help them obtain amends for their grievances. Then he firmly stated: “…let me [summon] you, in the name of our common country, … to express your utmost horror … of the man who wishes, under any [false] pretenses, to overturn the liberties of our country, and who wickedly attempts to open the floodgates of civil discord and deluge our rising empire in blood.” He closed by encouraging them to “patriotism and patient virtue, rising superior to the pressure of the most complicated sufferings.”
This speech was not very well received by his men. The question of a military overthrow still hung in the balance. If Washington decided to join his men, he could march on Philadelphia and become King of America. As we know, such events had happened before in history. That, however, was the furthest thing from his mind. After a long silence, Washington took out a letter from a member of Congress explaining the financial difficulties of the government. After reading a portion of the letter with his eyes squinting at the small writing, Washington suddenly stopped. … His officers stared at him, wondering. Washington then reached into his coat pocket and took out a pair of reading glasses. Few of them knew he wore glasses, and were surprised. "Gentlemen," said Washington, "you will permit me to put on my spectacles, for I have not only grown gray but almost blind in the service of my country."
In that moment of unreserved honesty, Washington's men were deeply moved, even shamed, and many were quickly in tears, now looking with great affection at this aging man who had led them through so much. Washington read the remainder of the letter, then left without saying another word. … After a long silence, his officers then voted unanimously to submit to the rule of Congress. Thus, the civilian government was preserved -- and the young experiment of a republic in America continued on … George Washington stood true in the crucible of power.
By: J. David Gowdy
______________________________
Quoted from: http://www.historyplace.com/speeches/washington.htm
Posted by J. David Gowdy at 1:21 AM No comments: