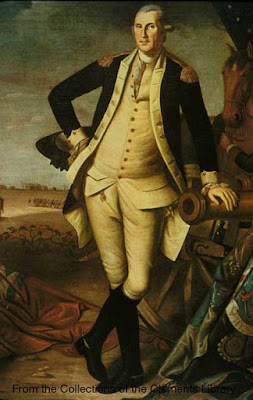 "In the course of his life, Washington’s fate became inseparable from the fate of his country. By the time of his death he was identified in the eyes of the world with America and the cause of liberty for which America stood. His greatness was a testament to America’s promise. The significance of that testament has not diminished with time. To the contrary, for anyone who wants to understand this country and help fulfill its promise, it is, if anything, more necessary today than at any time in the past to understand the greatness of George Washington. It is still true, 200 years after it was first said by Fisher Ames in a eulogy of Washington, that 'Our history is but a transcript of his claims on our gratitude.'"[1]

The Marquis de Chastellux recorded in his notes, "The strongest characteristic of this respectable man is the perfect harmony which reigns between the physical and moral qualities which compose his personality. . . . It is not my intention to exaggerate. I wish only to express the impression General Washington has left on my mind, the idea of a perfect whole.” (Travels in North America, Basil Hall, 1828)

"His sheer personal presence was a significant and characteristic part of his greatness and of his influence on the world. In battle and in counsel, he often exerted a powerful impact on those around him just by being there and being the man he was. As Lafayette observed at the Battle of Monmouth, where Washington’s appearance on the scene stopped a confused and panicked retreat, “General Washington seemed to arrest fortune with one glance.”[2]

“Born to high destinies, he was fashioned for them by the hand of nature. His form was noble—his port majestic. On his front were enthroned the virtues which exalt, and those which adorn the human character. So dignified his deportment, no man could approach him but with respect—none was great in his presence. You have all seen him, and you all have felt the reverence he inspired. . . .” -- Gouverneur Morris, Eulogy of Washington (1799)

“The serenity of his countenance, and majestic gracefulness of his deportment, impart a strong impression of that dignity and grandeur, which are his peculiar characteristics, and no one can stand in his presence without feeling the ascendancy of his mind, and associating with his countenance the idea of wisdom, philanthropy, magnanimity, and patriotism.” --Dr. James Thacher (1778)

In the great crises of the American revolution and founding, “some man was wanting who possessed a commanding power over the popular passions, but over whom those passions had no power. That man was Washington. Consider, for a moment, what a reputation it was, in 1789; such as no man ever before possessed by so clear a title, and in so high a degree. His fame seemed in its purity to exceed even its brightness. Office took honor from his acceptance, but conferred none. Ambition stood awed and darkened by his shadow. . . . This is not exaggeration; never was confidence in a man and a chief magistrate more widely diffused, or more solidly established. . . .” --Fisher Ames’ Eulogy of Washington, February 8, 1800
“With patriotic pride we review the life of our Washington and compare him with those of other countries who have been preeminent in fame. Ancient and modern names are diminished before him. Greatness and guilt have too often been allied, but his fame is whiter than it is brilliant. The destroyers of nations stood abashed at the majesty of his virtue. It reproved the intemperance of their ambition and darkened the splendor of victory… Let his countrymen consecrate the memory of the heroic general, the patriotic statesman, and the virtuous sage. Let them teach their children never to forget that the fruit of his labors and his example are their inheritance.”  --Eulogy from United States Senate, 1799

“First in war, first in peace, and first in the hearts of his countrymen, he was second to none in humble and enduring scenes of private life. Pious, just, humane, temperate, and sincere; uniform dignified, and commanding; his example was as edifying to all around him as were the effects of that example lasting; correct throughout, vice shuddered in his presence and virtue always felt his fostering hand. The purity of his private charter gave effulgence to his public virtues; Such was the man for whom our nation morns.” --John Marshall, official eulogy of George Washington, delivered by Richard Henry Lee, 1799

"His integrity was most pure, his justice the most inflexible I have ever known. …He was, indeed, in every sense of the words, a wise, a good, and a great man… His person, you know, was fine, his stature exactly what one would wish, his deportment easy, erect and noble; the best horseman of his age, and the most graceful figure that could be seen on horseback… On the whole, his character was, in its mass, perfect, in nothing bad, in few points Indifferent; and it may truly be said, that never did nature and fortune combine more perfectly to make a man great… For his was the singular destiny and merit, of leading the armies of his country successfully through an arduous war, for the establishment of its independence; of conducting its councils through the birth of a [new] government… and of scrupulously obeying the laws through the whole of his career, civil and military, of which the history of the world furnishes no other example...." --Thomas Jefferson, letter to Dr. Walter Jones, January 2, 1814
________________________
[1] "Rediscovering George Washington" (formerly on PBS online)
http://claver.gprep.org/fac/sjochs/rediscoveringgeorgewashington.htm
[2] Id.
Posted by J. David Gowdy at 1:44 PM 1 comment: 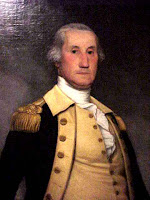 “Presidents' Day is intended (for some) to honor all the American presidents, but most significantly George Washington and Abraham Lincoln. According to the Gregorian or "New Style" calendar that is most commonly used today, George Washington was born on February 22, 1732. But according to the Julian or "Old Style" calendar that was used in England until 1752, his birth date was February 11th. Back in the 1790s, Americans were split - some celebrated his birthday on February 11th and some on February 22nd.

When Abraham Lincoln became president and helped reshape our country, it was believed he, too, should have a special day of recognition. Tricky thing was that Lincoln’s birthday fell on February 12th. Prior to 1968, having two presidential birthdays so close together didn't seem to bother anyone. February 22nd was observed as a federal public holiday to honor the birthday of George Washington and February 12th was observed as a public holiday to honor Abraham Lincoln’s birthday.

In 1968, things changed when the 90th Congress was determined to create a uniform system of federal Monday holidays. They voted to shift the existing holidays (including Washington's Birthday) to Mondays. The law took effect in 1971, and as a result, Washington's Birthday holiday was changed to the third Monday in February. But not all Americans were happy with the new law. There was some concern that Washington's identity would be lost since the third Monday in February would never fall on his actual birthday. There was also an attempt to rename the public holiday "Presidents' Day", but the idea didn't go anywhere since some believed not all presidents deserved a special recognition.

Even though Congress had created a uniform federal holiday law, there was not a uniform holiday title agreement among the individual states. Some states, like California, Idaho, Tennessee and Texas chose not to retain the federal holiday title and renamed their state holiday "President's Day." From that point forward, the term “Presidents' Day” became a marketing phenomenon, as advertisers sought to capitalize on the opportunity for three-day or week-long sales.

In 1999, bills were introduced in both the U.S. House (HR-1363) and Senate (S-978) to specify that the legal public holiday once referred to as Washington's Birthday be "officially" called by that name once again. Both bills died in committees.

Today, "President’s Day" is well accepted and celebrated. Some communities still observe the original holidays of Washington and Lincoln, and many parks actually stage reenactments and pageants in their honor. The National Park Service also features a number of historic sites and memorials to honor the lives of these two presidents, as well as other important leaders.” (1)

Despite the commercial and frequent use of the term “President’s Day,” hopefully, we as a nation will choose to continue to celebrate and remember the life and legacy of the Father of our Nation, George Washington on the federal holiday, or on his actual birthday, February 22nd.  An excellent way to do so was commended to all citizens by none other than Abraham Lincoln in a Presidential Proclamation on February 19, 1862:

"It is recommended to the people of the United States that they assemble in their customary places of meeting for public solemnities on the twenty-second day of February instant, and celebrate the anniversary of the birth of the Father of His Country by causing to be read to them his immortal Farewell Address.” (2)