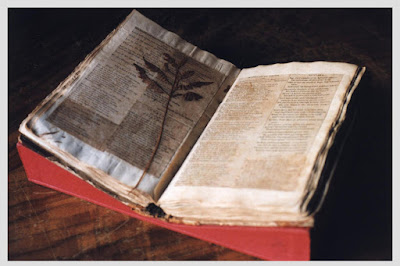 In 2006, Jonathan Gross edited and introduced the world to “Thomas Jefferson’s Scrapbooks.”[1] As Richard Dixon of the Thomas Jefferson Heritage Society observed, “This is a book of Thomas Jefferson’s poetry; not poetry that he wrote, but poems that he collected. …Jefferson began the scrapbooks in 1801, and compiled them through his two terms as president. …This is not the standard Jefferson biography. The author calls it an ‘autobiography of the heart,’ and indeed it is. ”[2] Jefferson’s ‘autobiography of the heart’ contains numerous poetic references to virtue, virtuous anecdotes, and moral lessons (along with patriotic and other themes). As examples of these, see: “Patriotic Odes for the Year 1808” (p.120), “To Virtue” (p. 164),“The Choice of a Wife” (pp. 259-60), “Advice to Young Women” (p. 296),“Moral and Natural Beauty” (pp. 314-315), and “Epitaph on a Young Lady” (p. 384). Let us turn to one of these poems titled Advice to Young Women (Anonymous):
Detest disguise, remember 'tis your part
By gentle fondness to retain the heart.
Let duty, prudence, virtue, take the lead,
To fix your choice:  – but from it ne'er recede.
Abhor coquetry;  – spurn the shallow fool
Who measures out dull complements by rule,
And, without meaning, like a chattering jay;
Repeats the same dull strain throughout the day,
Are men of sense attracted by your fate?
Your well turn’d figure, or their compound grace?
Be mild and equal, moderately gay;
Your judgment rather than your wit display…
Disdain duplicity – from pride be free:
What every woman should, you then will be.
All of such poems he read, gathered, cut, pasted and compiled into four volumes during the eight years he served as President of the United States (and all the while also compiling “The Life and Morals of Jesus of Nazareth.”). No small task indeed, but more momentous in regard to his pursuit of virtue, and his desire to share that pursuit with his loved ones – whom, next in importance to his daughters, were his grandchildren. As his granddaughter Ellen Randolph Coolidge reflected, “My Bible came from him, my Shakespeare, my first writing table, my first Leghorn hat, my first silk dress. …Our Grandfather seemed to read our hearts, to see our invisible wishes…” [3] His scrapbooks were most likely fashioned as much for them as they were for himself. 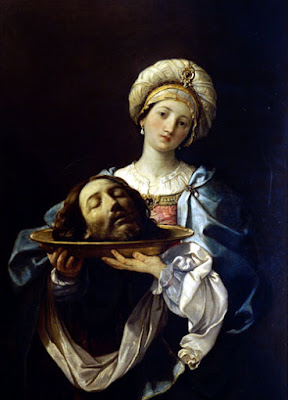 By: J. David Gowdy
When visiting Monticello, a visitor may observe that prominent in Thomas Jefferson’s parlor are portraits and paintings of historical figures of significance and importance to him and his worldview. These include his triumvirate of Bacon, Newton & Locke, but also Washington, Lafayette, John Adams, Mary Magdalene, and the Holy Family, among others. One painting in particular stands out – it is “Herodias Bearing the Head of John the Baptist.”  Let us reflect upon this scene.  As Luke recorded in chapter 3:19, John the Baptist had rebuked Herod the tetrarch because of his marriage to Herodias, his brother's wife, “and all the other evil things he had done.” Herod had John arrested and thrown into prison. Then as Matthew records in chapter 14:6-7, “when Herod's birthday was kept, the daughter of Herodias danced before them, and pleased Herod. Whereupon he promised with an oath to give her whatsoever she would ask. And she, being before instructed of her mother, said, Give me here John Baptist's head in a charger.” May we surmise that to Jefferson, John the Baptist represented virtue versus tyranny, or morality versus corruption?
Considering that Thomas Jefferson found meaning in this painting of Herodias, may we also query whether it may have possessed both a religious and a political connotation that resonated both within him and with respect to his times?  As Professor Marvin Olasky has convincingly argued, the American War of Independence was fought for much more than economic freedom and “no taxation without representation.” Virtue, or morality, and the right to govern their religious affairs were paramount in the minds and hearts of the American patriots of ‘76. Their legacy and belief in divine rights was borne of pilgrims and puritans, and other persecuted religious minorities, who immigrated to the new world in search of religious freedom by escaping the entrenched tyranny of church and state which were deeply rooted for centuries in Great Britain and Europe.  In this regard, the Revolutionary War was as much a battle against “the corruption of 18th century British high society,” as it was about financial matters.[1] It is virtue that inspired these souls to battle against great odds, more than simple monetary gain. It is virtue battling against tyranny that inspired Thomas Jefferson and his fellow Virginians to risk treason against the king of England, and potential death by hanging as the penalty for their rebellion.
The Seal of the Commonwealth of Virginia shows Virtue, spear in hand, with her foot on the prostrate form of Tyranny, whose crown lies nearby.[2]  In one sense, this singular image of Virtue conquering Tyranny may justly sum up Jefferson’s political convictions. Not only does this theme reverberate in the life and writings of each author cited by him for the principles of the Declaration, but it is also recurrent in Jefferson’s own life. From his Summary View of the Rights of British America (1774), to the Declaration of Independence (1776), to his Notes on the State of Virginia (1785), and finally to his Statute for Religious Freedom (1786), Jefferson dedicated his public service to overcoming all forms of tyranny in government, church and state, through a constant appeal to moral principles and natural rights. From the Summary View, representing the sentiments of  “a free people claiming their rights, as derived from the laws of nature” … he states that, “History has informed us that bodies of men, as well as individuals, are susceptible of the spirit of tyranny, [and states that] the whole art of government consists in the art of being honest.” From the Statute for Religious Freedom, “Whereas Almighty God hath created the mind free; that all attempts to influence it by temporal punishment or burdens, or by civil incapacitations …are a departure from the plan of the Holy author of our religion.”  Lastly, in what may be deemed to be his personal motto, he stated, “for I have sworn upon the altar of god eternal hostility against every form of tyranny over the mind of man.”[3]
[1] Marvin Olasky, Fighting for Liberty and Virtue (Regnery Publishing, Washington D.C., 1996) p. 142.
[2] The Seal was planned by George Mason and designed by George Wythe. See Kate Mason Rowland, The Life of George Mason, 1725-1792 (G.P. Putnam's Sons, 1892) pp. 264–26.
[3] Thomas Jefferson to Dr. Benjamin Rush, September 23, 1800, ME 10:175.
Posted by J. David Gowdy at 6:01 PM 1 comment: