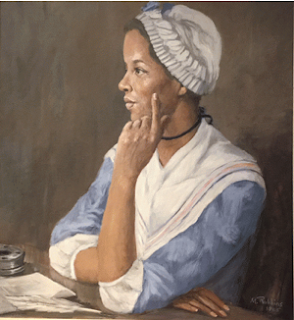 On Virtue
By: Phillis Wheatley

O' Thou bright jewel in my aim I strive
To comprehend thee. Thine own words declare
Wisdom is higher than a fool can reach.
I cease to wonder, and no more attempt
Thine height t' explore, or fathom thy profound.
But, O my soul, sink not into despair,
Virtue is near thee, and with gentle hand
Would now embrace thee, hovers o'er thine head.
Fain would the heav'n-born soul with her converse,
Then seek, then court her for her promis'd bliss.

Auspicious queen, thine heav'nly pinions spread,
And lead celestial Chastity along;
Lo! now her sacred retinue descends,
Array'd in glory from the orbs above.
Attend me, Virtue, thro' my youthful years!
O leave me not to the false joys of time!
But guide my steps to endless life and bliss.
Greatness, or Goodness, say what I shall call thee,
To give me an higher appellation still,
Teach me a better strain, a nobler lay,
O thou, enthron'd with Cherubs in the realms of day.
________________________

"Slave-turned-poet Phillis Wheatley (c. 1753–1784) was enslaved and sold when she was 7 or 8 (her exact birth year is unknown). [She was] named after “The Phillis,” the ship that took her to Boston in 1761. Her owner, John Wheatley, a progressive for the time, saw that Wheatley was bright and encouraged her education. By age 14, Wheatley had written her first poem. In 1770, Wheatley wrote an elegy for the deceased Reverend George Whitefield, which became published throughout New England. Her young age, her sex, her heritage, and the short amount of time she had lived in the English-speaking world all contributed to her renown in her readers’ eyes.

Without any formal education, she not only learned English but excelled at the art of the language in a remarkably short amount of time. Wheatley’s growing fame, in combination with her poor health, led the Wheatley family to send her to London, where, at age 20, she published her first book of poetry, Poems on Various Subjects, Religious and Moral. Shortly after being published, Wheatley was emancipated from her slave owners. She married John Peters a few years after.

But neither her literary success nor her marriage were able to bring her out of poverty. Her frailty due to continued illness, combined with the financial challenges of the Revolutionary War, prevented her from ever publishing her second book of poems. In 1784, Wheatley lost her husband to debtors’ prison, and all three of her children died infancy. Phillis Wheatley herself died on December 9, 1784."

University of Massachusetts Boston's Wheatley Hall was named after her in 1985. Image above is of a painting that hangs in the hall.
________________________
See: https://www.massachusetts.edu/news/featured-stories/black-history-month-spotlight-remembering-wheatley-hall-namesake-phillis

The Iron Glove of Tyranny