Lincoln's Emancipation Proclamation: The End of Slavery in America 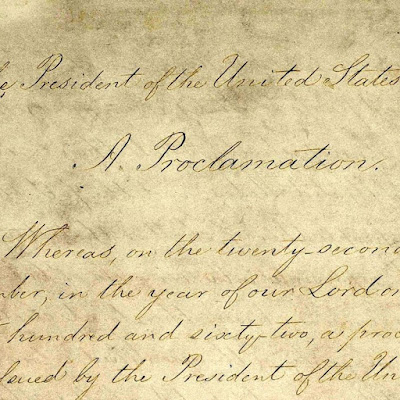 Reviews of Allen C. Guelzo, Lincoln's Emancipation Proclamation: The End of Slavery in America. (New York: Simon and Schuster, 2004). This significant book should be read by all who are interested in learning more about the end of slavery in America, including the political, philosophical, and military factors that President Abraham Lincoln grappled with (not to mention his own personal and religious struggle) in determining to emancipate the slaves during the Civil War.

Whereas, on the twenty-second day of September, in the year of our Lord one thousand eight hundred and sixty-two, a proclamation was issued by the President of the United States, containing, among other things, the following, to wit:

“That on the first day of January, in the year of our Lord one thousand eight hundred and sixty-three, all persons held as slaves within any State or designated part of a State, the people whereof shall then be in rebellion against the United States, shall be then, thenceforward, and forever free; and the Executive Government of the United States, including the military and naval authority thereof, will recognize and maintain the freedom of such persons, and will do no act or acts to repress such persons, or any of them, in any efforts they may make for their actual freedom...

And by virtue of the power, and for the purpose aforesaid, I do order and declare that all persons held as slaves within said designated States, and parts of States, are, and henceforward shall be free; and that the Executive government of the United States, including the military and naval authorities thereof, will recognize and maintain the freedom of said persons.

And I hereby enjoin upon the people so declared to be free to abstain from all violence, unless in necessary self-defence; and I recommend to them that, in all cases when allowed, they labor faithfully for reasonable wages.

And I further declare and make known, that such persons of suitable condition, will be received into the armed service of the United States to garrison forts, positions, stations, and other places, and to man vessels of all sorts in said service.

And upon this act, sincerely believed to be an act of justice, warranted by the Constitution, upon military necessity, I invoke the considerate judgment of mankind, and the gracious favor of Almighty God...”

“No other words in American history changed the lives of so many Americans as this plain, blunt declaration from Abraham Lincoln's Emancipation Proclamation. But no other words in American history have been so often passed over or held up to greater suspicion. Born in the struggle of Lincoln's determination to set slavery on the path to destruction, it has remained a document of struggle, as conflicting interpretations and historical mysteries swirl around it. What were Lincoln's real intentions? Was he the Great Emancipator or just a Great Fixer? What slaves did the Proclamation actually free? Or did the slaves free themselves? Why is the language of the Proclamation so bland, so legalistic, so far from the soaring eloquence of the Gettysburg Address? Prize-winning Lincoln scholar Allen C. Guelzo presents, for the first time, a full-scale study of Lincoln's greatest state paper. Using unpublished letters and documents, little- known accounts from Civil War-era newspapers, and Congressional memoirs and correspondence, Guelzo tells the story of the complicated web of statesmen, judges, slaves, and soldiers who accompanied, and obstructed, Abraham Lincoln on the path to the Proclamation. The crisis of a White House at war, of plots in Congress and mutiny in the Army, of one man's will to turn the nation's face toward freedom -- all these passionate events come alive in a powerful and moving narrative of Lincoln's, and the Civil War's, greatest moment.”  Google Books https://books.google.com/books/about/Lincoln_s_Emancipation_Proclamation.html?id=DJmTUq9hYUoC [accessed 8-18-20].

“Allen C. Guelzo's meticulous and imaginative analysis of the origins and impact of the Emancipation Proclamation resurrects that beleaguered document as the cornerstone of freedom for America's four million slaves. Abraham Lincoln's personal commitment to emancipation has suffered egregiously at the hands of critics, both scholarly and popular, who discount his proclamation's centrality to emancipation while pointing to his zest for compensated emancipation and colonization as an indication of his true feelings—lukewarm, vacillating, and even racist—toward African‐American freedom. Guelzo's masterful reconstruction of Lincoln's motives and methods, rendered within the political and military context in which they played out, challenges the notion that the Emancipation Proclamation “accomplished nothing” (p. 2) and reinforces Lincoln's genuine personal commitment to end slavery. The crux of Guelzo's argument is his portrayal of Lincoln as an “Enlightenment president” who was steadfast in his pursuit of freedom...”
The American Historical Review, Volume 110, Issue 4, October 2005, Pages 1186–1187.

Many of Lincoln’s critics, especially African-Americans, go so far as to claim that he was no friend of blacks and did not want to risk the political fallout that would surely result from emancipation, but was eventually forced by circumstances to do so. In the words of Julius Lester, “Blacks have no reason to feel grateful to Abraham Lincoln. How come it took him two whole years to free the slaves? His pen was sitting on his desk the entire time.” Many also have questioned the real significance of the Emancipation Proclamation, arguing that it was merely a piece of propaganda and that it actually freed no slaves. As Richard Hofstadter wrote, “had the political strategy of the moment called for a momentous human document of the stature of the Declaration of Independence, Lincoln could have risen to the occasion.” Instead, he produced a document with “all the moral grandeur of a bill of lading.” In addition, the document he issued only freed slaves where the federal government had no power. It did not apply to slaves in the loyal slave states or in those parts of the Confederacy under Union control. Indeed, Lincoln did not free the slaves; they freed themselves.

Unfortunately, Lincoln’s defenders often don’t do him any favors. They claim either that he “grew in office,” progressing from a position of moral indifference and ignorance regarding emancipation at the time of his election to one who came to favor black freedom by the time of the Emancipation Proclamation, or that he had the patience to wait for the opportune moment to issue the proclamation.

The Emancipation Proclamation may lack the rhetorical elegance of the Gettysburg Address or the Second Inaugural, but Guelzo makes it clear that the Proclamation is the most epochal of Lincoln’s public pronouncements. Lincoln’s Emancipation Proclamation is the definitive treatment of emancipation. Allen Guelzo deserves our immense gratitude for returning this critical document to its place of honor in the history of the American Republic.”
--Mackubin Thomas Owens, “Abraham Lincoln Saved the Union, But Did He Really Free the Slaves?” Editorial, Ashbrook Center, March 2004 https://ashbrook.org/publications/oped-owens-04-guelzo/ (Owens is an Adjunct Fellow of the Ashbrook Center, Associate Dean of Academics and Professor of Strategy and Force planning at the Naval War College in Newport, Rhode Island).
____________________________

Dr. Allen C. Guelzo is the Henry R. Luce Professor of the Civil War Era and the director of Civil War Era Studies at Gettysburg College. He is the author of Abraham Lincoln: Redeemer President, which won the Lincoln Prize in 2000, Lincoln’s Emancipation Proclamation: The End of Slavery in America, which won the Lincoln Prize in 2005, and Lincoln and Douglas: The Debates That Defined America, which won the Abraham Lincoln Institute Prize in 2008. His most recent work in Lincoln is Abraham Lincoln As a Man of Ideas (a collection of essays published in 2009) and Lincoln, a volume in Oxford University Press’s Very Short Introductions series (also 2009). His book on the battle of Gettysburg, Gettysburg: The Last Invasion (Knopf, 2013) spent eight weeks on the New York Times best-seller list.

His articles and essays have appeared in scholarly journals and in the New York Times, Wall Street Journal, Christian Science Monitor, Washington Post, and Los Angeles Times, and he has been featured on NPR, the Discovery Channel, the National Geographic Channel, Brian Lamb’s BookNotes, and the Daily Show with Jon Stewart. He is a member of the American Historical Association, the Organization of American Historians, the Society for Historians of the Early American Republic, the Society of Civil War Historians, and the Union League of Philadelphia.
Posted by J. David Gowdy at 12:06 AM No comments:

Our nation has and continues to be in the throes of a debate and conflict, sometimes violent, over the history and meaning of the phrase in the Declaration of Independence, which declares that, “all men are created equal, that they are endowed by their Creator with certain unalienable Rights.” The author of that language, Thomas Jefferson, is also under attack – both his character and legacy – as well as his image forged and carved into statues and monuments. This Essay, focusing on the words of Thomas Jefferson, Abraham Lincoln, and Frederick Douglass, is written in an effort to address those questions and defend against those assaults, while hopefully providing helpful evidence, answers, and insights, that we might yet embrace and uphold America’s “defining creed.”

Read the Essay: http://www.liberty1.org/EQUAL.pdf
Posted by J. David Gowdy at 11:14 AM No comments: