Preaching Virtue and Happiness in Virginia (1776) 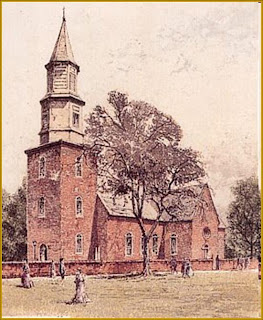 The Anglican church (or the Church of England) was the official church of the colony of Virginia.  In colonial Virginia, during what has been called “The Great Awakening” – a period of increased religious fervor during the 18th century that was as a precursor to the American Revolution, Anglican priests taught that virtue led to happiness.  In their own preaching, the Anglican ministers in Virginia often relied upon the sermons of the Archbishop of Canterbury, Dr. John Tillotson (1630-1694). The Archbishop of Canterbury was the senior bishop and principal leader of the Church of England, and Tillotson served in this capacity from 1691-1694.  His Works were read and used not only by ministers, but were read by many parishioners.  According to one historian, Tillotsons Works were "among [Virginian's] favorite books." (Thomas Jefferson owned a copy in his personal library). Among other religious themes, Tillotson asserted that human happiness was only to be found in the pursuit of moral virtue, and he taught that, “Virtue and Goodness are so essential to happiness that where these are not, there is no capacity of it.”

Interestingly enough, the law in Virginia at the time was such that you must attend church at least once a month or be subject to a fine, so the church pews were usually full.  Thus, whether from duty or devotion Anglican Virginians, such as George Washington and Thomas Jefferson, would have heard these types of sermons when they attended church. For example, Charles Clay, the Anglican minister in Thomas Jefferson’s parish, who presided over Jefferson’s mother’s funeral in 1776, was a follower of Tillotson.  Clay taught his congregations to “Give …all diligence to grow in grace & increase in Virtue… [which brings] true Happiness.” (Virginia-born Clay was a parish priest in St. Anne’s Church, Albemarle County, from 1769 to 1785).

Of course while Washington and Jefferson didn’t attend church every Sunday, they were exposed to these teachings.  From their study of history, and British political philosophers such as Sidney, as well as the reformation and the enlightenment, is it any wonder then that Washington and Jefferson embraced these same principles and reflected them in their beliefs and writings?

George Washington wrote, "[T]here is no truth more thoroughly established, than that there exists . . . an indissoluble union between virtue and happiness." (First Inaugural Speech (1789).  And in his Farewell Address he stated, "Can it be that Providence has not connected the permanent felicity [happiness] of a nation with its virtue?"

Thomas Jefferson wrote to a friend, “The order of nature [is] that individual happiness shall be inseparable from the practice of virtue.” (Letter to M. Correa de Serra, 1814).  In another letter (almost quoting Tillotson), Jefferson stated that: “Without virtue, happiness cannot be.” (Letter to Amos J. Cook, 1816). And, on another occasion he wrote, “Happiness is the aim of life.  Virtue is the foundation of happiness.” (Letter to William Short, October 31, 1819).

Also see: "Thomas Jefferson and the Pursuit of Virtue."

The federal holiday celebrated today, February 20, 2012 (the 3rd Monday of February) is officially intended to honor George Washington’s Birthday. Washington’s Birthday has been a federal holiday since 1885. For more than 80 years it was celebrated on Washington’s actual birthday, Feb. 22nd.  What changed?  Following is a brief history of this important holiday:
“Presidents' Day is intended (for some) to honor all the American presidents, but most significantly George Washington and Abraham Lincoln. According to the Gregorian or "New Style" calendar that is most commonly used today, George Washington was born on February 22, 1732. But according to the Julian or "Old Style" calendar that was used in England until 1752, his birth date was February 11th. Back in the 1790s, Americans were split - some celebrated his birthday on February 11th and some on February 22nd.
When Abraham Lincoln became president and helped reshape our country, it was believed he, too, should have a special day of recognition. Tricky thing was that Lincoln’s birthday fell on February 12th. Prior to 1968, having two presidential birthdays so close together didn't seem to bother anyone. February 22nd was observed as a federal public holiday to honor the birthday of George Washington and February 12th was observed as a public holiday to honor Abraham Lincoln’s birthday.
In 1968, things changed when the 90th Congress was determined to create a uniform system of federal Monday holidays. They voted to shift the existing holidays (including Washington's Birthday) to Mondays. The law took effect in 1971, and as a result, Washington's Birthday holiday was changed to the third Monday in February. But not all Americans were happy with the new law. There was some concern that Washington's identity would be lost since the third Monday in February would never fall on his actual birthday. There was also an attempt to rename the public holiday "Presidents' Day", but the idea didn't go anywhere since some believed not all presidents deserved a special recognition.
Even though Congress had created a uniform federal holiday law, there was not a uniform holiday title agreement among the individual states. Some states, like California, Idaho, Tennessee and Texas chose not to retain the federal holiday title and renamed their state holiday "President's Day." From that point forward, the term “Presidents' Day” became a marketing phenomenon, as advertisers sought to capitalize on the opportunity for three-day or week-long sales.
In 1999, bills were introduced in both the U.S. House (HR-1363) and Senate (S-978) to specify that the legal public holiday once referred to as Washington's Birthday be "officially" called by that name once again. Both bills died in committees.
Today, President’s Day is well accepted and celebrated. Some communities still observe the original holidays of Washington and Lincoln, and many parks actually stage reenactments and pageants in their honor. The National Park Service also features a number of historic sites and memorials to honor the lives of these two presidents, as well as other important leaders.” (1)
Despite the commercial and colloquial use of the term “President’s Day,” hopefully, we as a nation will choose to continue to celebrate and remember the life and legacy of the Father of our Nation, George Washington.  An excellent way to do so was commended to all citizens by Abraham Lincoln in a Presidential Proclamation on February 19, 1862:
"It is recommended to the people of the United States that they assemble in their customary places of meeting for public solemnities on the twenty-second day of February instant, and celebrate the anniversary of the birth of the Father of His Country by causing to be read to them his immortal Farewell Address.” (2)
May all students and citizens, young and old, regularly read and ponder Washington's Farewell Address, and may we teach our children and posterity to always remember and honor our nation’s Founding Father.
J. David Gowdy, President
The Washington, Jefferson & Madison Institute
______________________________________
(1)  http://usparks.about.com/od/historicalparks/a/Presidents-Day.htm
(2)  Read Washington's Farewell Address at:  http://www.wjmi.org/DOCS/farewell.htm
Posted by J. David Gowdy at 1:39 PM No comments: