Betsy Ross and the Stars & Stripes 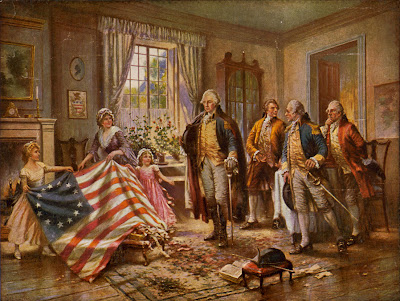 “Betsy Ross (Elizabeth Griscom) was born on January 1st, 1752 in Philadelphia, Pennsylvania.   Betsy was brought up a Quaker and educated in Quaker schools. On her marriage to John Ross, an Episcopalian, in 1773, she was disowned by the Society of Friends.  Her husband was killed in 1776 in the Revolutionary War while serving in the militia, and Ross took over the upholstering business he had founded. According to her grandson, William Canby, in a paper presented before the Historical Society of Pennsylvania in 1870, Ross was visited in June 1776 by George Washington, Robert Morris, and George Ross, her late husband's uncle. The story is that they asked her to make a flag for the new nation that would declare its independence the following month. A rough sketch presented to her was redrawn by Washington incorporating her suggestions. Betsy Ross then fashioned the flag in her back parlor—again, according to the legend. She is supposed also to have suggested the use of the five-pointed star rather than the six-pointed one chosen by Washington. On June 14, 1777, the Continental Congress adopted the Stars and Stripes as the national flag of the United States.

It is known that Ross made flags for the navy of Pennsylvania, but there is no firm evidence in support of the popular story about the national flag. There is, however, no conflicting testimony or evidence, either, and the story is now indelibly a part of American legend. Ross married Joseph Ashburn in 1777, and, after his death in a British prison in 1782, she was married for a third time, in 1783, to John Claypoole.  She continued the upholstering business, which became very profitable, until 1827, when she turned it over to her daughter. The Philadelphia house in which Betsy Ross lived and from which she ran her upholstery business still stands; it has been restored and is open to the public.” (1)


“Samuel Wetherill was a good friend of Betsy Ross. In fact he and Ross were the last two members of the Free Quaker Meeting House and together shut its doors for the last time in 1834. The Wetherill family oral tradition holds that he visited Betsy shortly after her meeting with the Congressional Committee. She told him what had just transpired. Wetherill, recognizing the historic import of that meeting, asked if he could keep the 5-pointed star which Ross had cut for the committee. She gave it to him. In 1925, the Wetherill family safe was opened and inside was that 5-pointed star. Until recently, that star was exhibited at the Free Quaker Meeting House, a few blocks from the Betsy Ross House. It has since gone missing.” (2)
In April 2009, the Pennsylvania Historical and Museum Commission officially recognized Betsy Ross's contributions with a historic marker in front of her house, stating, “Credited with making the first stars and stripes flag, Ross was a successful upholsterer. She produced flags for the government for over 50 years. As a skilled artisan, Ross represents the many women who supported their families during the Revolution and early Republic.”
____________________________
Quoted from: (1): http://www.biography.com/people/betsy-ross-9464205 and (2) http://www.ushistory.org/betsy/flagpcp.html
Posted by J. David Gowdy at 9:15 PM No comments: