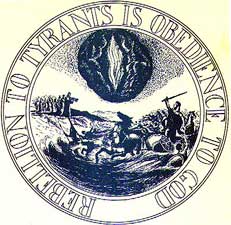 On July 4, 1776 Thomas Jefferson, Benjamin Franklin and John Adams were appointed by the Continental Congress to design a seal for the new United States of America.  "Resolved, That Dr. Franklin, Mr. J. Adams and Mr. Jefferson, be a committee, to bring in a device for a seal for the United States of America." – July 4, 1776, Journals of Continental Congress. For the design team, Congress chose three of the five men who were on the committee that drafted the Declaration of Independence. The men consulted among themselves between July 4 and August 13, and then each brought before the committee a suggestion for the design of the Great Seal.


Benjamin Franklin's proposal is preserved in a note of his own handwriting:

“Moses standing on the Shore, and extending his Hand over the Sea, thereby causing the same to overwhelm Pharaoh who is sitting in an open Chariot, a Crown on his Head and a Sword in his Hand. Rays from a Pillar of Fire in the Clouds reaching to Moses, to express that he acts by Command of the Deity.”

“Motto, Rebellion to Tyrants is Obedience to God."

Thomas Jefferson also suggested allegorical scenes. For the front of the seal: children of Israel in the wilderness, led by a cloud by day and a pillar of fire by night.  For the reverse: Hengist and Horsa, the two brothers who were the legendary leaders of the first Anglo-Saxon settlers in Britain.

“Pharaoh sitting in an open Chariot, a Crown on his head and a Sword in his hand, passing through the divided Waters of the Red Sea in Pursuit of the Israelites: Rays from a Pillar of Fire in the Cloud, expressive of the divine Presence and Command, beaming on Moses who stands on the shore and extending his hand over the Sea causes it to overwhelm Pharaoh.”

The same day Congress received the committee's report, it was "Ordered, To lie on the table."