Quotes from the Founders on the Constitution 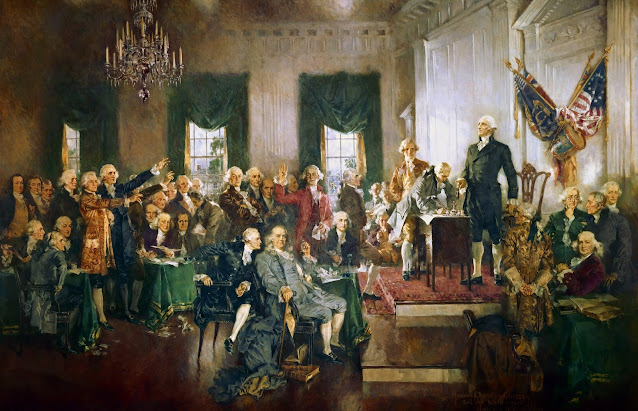 “The power under the Constitution will always be in the people. It is entrusted for certain defined purposes, and for a certain limited period, to representatives of their own choosing; and whenever it is executed contrary to their interest, or not agreeable to their wishes, their servants can and undoubtedly will be recalled.” – George Washington, Letter to Bushrod Washington, 1787.

“The Constitution is the guide, which I will never abandon.” – George Washington, Letter to The Boston Selectmen, July 28, 1795.

“The powers delegated by the proposed Constitution to the federal government are few and defined. Those which are to remain in the State governments are numerous and indefinite.” – James Madison, Federalist No. 45 (1788)

“The "Federalist" may fairly enough be regarded as the most authentic exposition of the text of the federal Constitution as understood by the Body [Constitutional Convention] which prepared & and the Authorities [state ratifying conventions] which accepted it.” –James Madison to Thomas Jefferson, February 8, 1825.

“I consider the foundation of the Constitution as laid on this ground: That "all powers not delegated to the United States, by the Constitution, nor prohibited by it to the States, are reserved to the States or to the people." To take a single step beyond the boundaries thus specially drawn around the powers of Congress, is to take possession of a boundless field of power, no longer susceptible of any definition.” – Thomas Jefferson, Opinion against the constitutionality of a National Bank (1791).

“I know no safe depository of the ultimate powers of the society but the people themselves; and if we think them not enlightened enough to exercise their control with wholesome discretion, the remedy is not to take it from them, but to inform their discretion by education. This is the true corrective of abuses of constitutional power.” –Thomas Jefferson, Letter to William Charles Jarvis, September 28, 1820.

"Though written constitutions may be violated in moments of passion or delusion, yet they furnish a text to which those who are watchful may again rally and recall the people. They fix, too, for the people the principles of their political creed." –Thomas Jefferson to Joseph Priestley, 1802. Writings, Memorial Edition (“ME”), 1905, 10:325.

"I am persuaded no Constitution was ever before so well calculated as ours for extensive empire and self-government." –Thomas Jefferson to James Madison, 1809. ME 12:277.

"If it be asked, What is the most sacred duty and the greatest source of our security in a Republic? The answer would be, An inviolable respect for the Constitution and Laws -- the first growing out of the last. ... A sacred respect for the constitutional law is the vital principle, the sustaining energy of a free government." –Alexander Hamilton, Essay in the American Daily Advertiser, 1794.

“I propose, in a series of papers, to discuss the following interesting particulars: ‑‑ The utility of the UNION to your political prosperity ‑‑ The insufficiency of the present Confederation to preserve that Union ‑‑ The necessity of a government at least equally energetic with the one proposed, to the attainment of this object ‑‑ The conformity of the  proposed Constitution to the true principles of republican government ‑‑ Its analogy to your own State constitution ‑‑ and lastly, The additional security which its adoption will afford the preservation of that species of government, to liberty, and to property.” – Alexander Hamilton, Federalist No. 1 (1788).

“I agree to this Constitution, with all its faults, if they are such; because I think a general Government necessary for us, and there is no form of government but what may be a blessing to the people if well administered, and believe farther that this is likely to be well administered for a course of years, and can only end in Despotism, as other forms have done before it, when the people shall become so corrupted as to need despotic Government, being incapable of any other. I doubt too whether any other Convention we can obtain, may be able to make a better Constitution. For when you assemble a number of men to have the advantage of their joint wisdom, you inevitably assemble with those men, all their prejudices, their passions, their errors of opinion, their local interests, and their selfish views. From such an assembly can a perfect production be expected? It therefore astonishes me, Sir, to find this system approaching so near to perfection as it does; and I think it will astonish our enemies.” – Benjamin Franklin, Speech for Adoption of the Constitution, September 17, 1787.

“Much of the strength & efficiency of any Government in procuring and securing happiness to the people depends, on opinion, on the general opinion of the goodness of the Government, as well as of the wisdom and integrity of its Governors. I hope therefore that for our own sakes as a part of the people, and for the sake of posterity, we shall act heartily and unanimously in recommending this Constitution … wherever our Influence may extend, and turn our future thoughts & endeavours to the means of having it well administered.” – Benjamin Franklin, Id.

“We have no Government armed with Power capable of contending with human Passions unbridled by morality and Religion. Avarice, Ambition Revenge or Galantry, would break the strongest Cords of our Constitution as a Whale goes through a Net. Our Constitution was made only for a moral and religious People. It is wholly inadequate to the government of any other.” – John Adams to the Massachusetts Militia, October 11, 1798.

“Cities may be rebuilt, and a People reduced to Poverty, may acquire fresh Property: But a Constitution of Government once changed from Freedom, can never be restored. Liberty once lost is lost forever. When the People once surrender their share in the Legislature, and their Right of defending the Limitations upon the Government, and of resisting every Encroachment upon them, they can never regain it.” – John Adams letter to Abigail Adams, July 7, 1775

“Neither the wisest constitution nor the wisest laws will secure the liberty and happiness of a people whose manners are universally corrupt. He therefore is the truest friend to the liberty of his country who tries most to promote its virtue…” – Samuel Adams, Essay published in the American Daily Advertiser, 1848.

“The sum of all is, if we would most truly enjoy the gift of Heaven, let us become a virtuous people; then shall we both deserve and enjoy it. While, on the other hand, if we are universally vicious and debauched in our manners, though the form of our Constitution carries the face of the most exalted freedom, we shall in reality be the most abject slaves.” – Samuel Adams, Id.