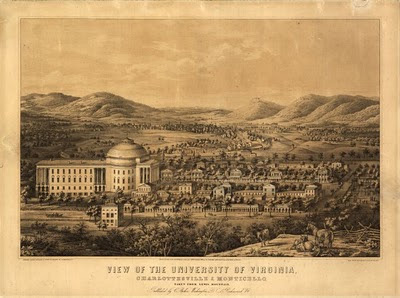 Thomas Jefferson was a firm believer in the value of education, particularly in its role in both strengthening and preserving the American republic.  He felt that his crowning achievement was as founder and “Father of the University of Virginia” (from the epitaph that he directed to be inscribed on his gravestone).  Jefferson “had faith in the ‘common man’ and his ability to elect wise and virtuous leaders if that man were educated to do so.”[1]  Jefferson wrote the Bill for the More General Diffusion of Knowledge, the Bill for Establishing a Public Library, and the Bill for Establishment of a System of Public Education, among others.[2]  He stated:
“I think by far the most important bill in our whole code is that for the diffusion of knowledge among the people. No other sure foundation can be devised for the preservation of freedom, and happiness.”[3]
No other founder labored as long, or as diligently, during his lifetime to establish a regular school system accessible to all citizens and youth.  He wrote:
“I have indeed two great measures at heart, without which no republic can maintain itself in strength: 1. That of general education, to enable every man to judge for himself what will secure or endanger his freedom. 2. To divide every county into hundreds, of such size that all the children of each will be within reach of a central school in it.”[4]
For Jefferson, the purpose of education in a republic is:
“To form the statesmen, legislators and judges, on whom public prosperity and individual happiness are so much to depend; To expound the principles and structure of government, ... and a sound spirit of legislation, which ... shall leave us free to do whatever does not violate the equal rights of another; … to develop the reasoning faculties of our youth, enlarge their minds, cultivate their morals, and instill into them precepts of virtue and order ...” [5]
With these thoughts and convictions in his heart, Jefferson’s last great dream was to found a public university in Virginia.  Beginning with his first concept in 1800, and after the investment of much of his personal time, money and labor, and lobbying to the state legislature with the valuable assistance of several influential friends, the University of Virginia was chartered by the Commonwealth of Virginia on January 25, 1819, and opened for classes in March 1825.
That same year, Jefferson’s long-time friend and collaborator, James Madison, wrote to a mutual friend concerning Jefferson, the University, and the diffusion of knowledge:
“Your old friend, Mr. Jefferson, still lives, and will close his illustrious career by bequeathing to his Country a magnificent Institute for the advancement and diffusion of knowledge; which is the only guardian of true liberty, the great cause to which his life has been devoted.”[6]
[1] Meg Brulatour, Background for the State of Education in New England: Post-Revolutionary War to Mid-19th Century (Essay, Virginia Commonwealth University).
[2] Steven Tozer, Paul C. Violas, Guy B. Senes, School and Society: Historical and Contemporary Perspectives., (McGraw-Hill, New York, 1995), pp. 30-31.
[3] Andrew Lipscomb and Albert Bergh, ed., The Writings of Thomas Jefferson, 20 Volumes, (Washington, D.C.: 1903-1904), 5:396 (Memorial Edition, cited as “ME”).
[4] Id., Thomas Jefferson to John Tyler, 1810, ME 12:393.
[5] Thomas Jefferson, Report for the Commissioners for the University of Virginia, August 4, 1818 (Special Collections Department, University of Virginia Library).
[6] James Madison to George Thomson, June 30, 1825, The Writings of James Madison, 4 Volumes (J.B. Lippincott & Co., Philadelphia, 1865) 3:492.
Posted by J. David Gowdy at 11:01 PM No comments:

The Principles and Practices of Virtue

Thomas Jefferson wrote to his friend Robert Skipwith, brother-in-law of Martha Wayles Skelton (Jefferson's bride-to-be), concerning how we learn "the principles and practices of virtue." He felt that by observing acts of charity or gratitude we may desire to replicate such acts ourselves. He also believed that history itself was insufficient to excite the "sympathetic emotion of virtue" and that fiction may also serve to "carry home to the heart every moral rule of life." In the same letter, Jefferson responds to Skipwith's request for a "List of Books for a Private Library." Volumes recommended by Jefferson include topics in fine arts, criticism, politics, trade, religion, law, modern and ancient history, natural philosophy and natural history. Following are excerpts from his letter written in 1771:

“I answer, everything is useful which contributes to fix in the principles and practices of virtue. When any original act of charity or of gratitude, for instance, is presented either to our sight or imagination, we are deeply impressed with its beauty and feel a strong desire in ourselves of doing charitable and grateful acts also. On the contrary when we see or read of any atrocious deed, we are disgusted with its deformity, and conceive an abhorrence of vice. Now every emotion of this kind is an exercise of our virtuous dispositions, and dispositions of the mind, like limbs of the body acquire strength by exercise. But exercise produces habit, and in the instance of which we speak the exercise being of the moral feelings produces a habit of thinking and acting virtuously...

Considering history as a moral exercise, her lessons would be too infrequent if confined to real life. Of those recorded by historians few incidents have been attended with such circumstances as to excite in any high degree this sympathetic emotion of virtue. We are therefore wisely framed to be as warmly interested for a fictitious as for a real personage. The field of imagination is thus laid open to our use and lessons may be formed to illustrate and carry home to the heart every moral rule of life.”