Impeachment and the U.S. Constitution 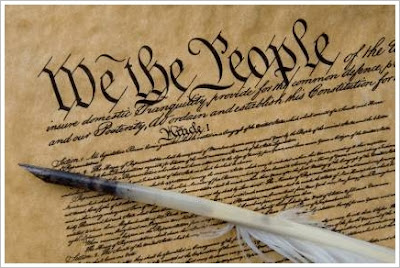 What does the U.S. Constitution say about Impeachment?

Article One, Section Two: “The House of Representatives shall choose their Speaker and other Officers; and shall have the sole Power of Impeachment.”

Article One, Section Three: “The Senate shall have the sole Power to try all Impeachments. When sitting for that Purpose, they shall be on Oath or Affirmation. When the President of the United States is tried, the Chief Justice shall preside: And no Person shall be convicted without the Concurrence of two thirds of the Members present. Judgment in Cases of impeachment shall not extend further than to removal from Office, and disqualification to hold and enjoy any Office of honor, Trust or Profit under the United States: but the Party convicted shall nevertheless be liable and subject to Indictment, Trial, Judgment and Punishment, according to Law.”

Article Two, Section Four: “The President, Vice President and all civil Officers of the United States, shall be removed from Office on Impeachment for, and Conviction of, Treason, Bribery, or other high Crimes and Misdemeanors.”

What are “high Crimes and Misdemeanors”?

One relevant source of the meaning of this phrase may be found in John Comyns’ Digest of the Laws of England (published in the late 1700's) which enumerated a series of “high crimes and misdemeanors” under the English Common Law. The first consisted of violations of criminal law (i.e., “high crimes”), such as encouraging piracy and bribery. The non-criminal violations described therein were all fiduciary breaches by a magistrate including:

• acting outside authority, as by ratifying a peace not approved by the parties, using the Great Seal without permission, and issuing unlawful and irregular orders;

• self-dealing, such as purchasing royal lands for less than true value, purchasing and holding a plurality of offices, and acting for one’s “own profit only;”

• other sorts of disloyalty such as recommending a prejudicial peace, or endangering the army or navy, etc.

What was said concerning Impeachment during the Debates in the Constitutional Convention?

In the debates of the Constitution Convention during the summer of 1787, three Virginia delegates, George Mason, James Madison, and Edmund Randolph “all spoke up to defend impeachment on July 20th, after Charles Pinckney of South Carolina and Gouverneur Morris of Pennsylvania moved to strike it. “[If the president] should be re-elected, that will be sufficient proof of his innocence,” Morris argued. “[Impeachment] will render the Executive dependent on those who are to impeach.”

“Shall any man be above justice?” Mason asked. “Shall that man be above it who can commit the most extensive injustice?” A presidential candidate might bribe the electors to gain the presidency, Mason suggested. “Shall the man who has practiced corruption, and by that means procured his appointment in the first instance, be suffered to escape punishment by repeating his guilt?”

“Madison argued that the Constitution needed a provision “for defending the community against the incapacity, negligence, or perfidy of the Chief Magistrate.” Waiting to vote him out of office in a general election wasn’t good enough. “He might pervert his administration into a scheme of peculation”— embezzlement—“or oppression,” Madison warned. “He might betray his trust to foreign powers.”

Randolph agreed on both these fronts. “The Executive will have great opportunities of abusing his power,” he warned, “particularly in time of war, when the military force, and in some respects the public money, will be in his hands.” The delegates voted, 8 states to 2, to make the executive removable by impeachment.”

(See: “Inside the Founding Fathers’ Debate Over What Constituted an Impeachable Offense,” by: Erick Trickey, The Smithsonian, October 2, 2017. https://www.smithsonianmag.com/history/inside-founding-fathers-debate-over-what-constituted-impeachable-offense-180965083/)

What do the Federalist Papers say about impeachment?

“A well-constituted court for the trial of impeachments is an object not more to be desired than difficult to be obtained in a government wholly elective. The subjects of its jurisdiction are those offenses which proceed from the misconduct of public men, or, in other words, from the abuse or violation of some public trust. They are of a nature which may with peculiar propriety be denominated POLITICAL, as they relate chiefly to injuries done immediately to the society itself.”

“The prosecution of them, for this reason, will seldom fail to agitate the passions of the whole community, and to divide it into parties more or less friendly or inimical to the accused. In many cases it will connect itself with the pre-existing factions, and will enlist all their animosities, partialities, influence, and interest on one side or on the other; and in such cases there will always be the greatest danger that the decision will be regulated more by the comparative strength of parties, than by the real demonstrations of innocence or guilt.”

“The delicacy and magnitude of a trust which so deeply concerns the political reputation and existence of every man engaged in the administration of public affairs, speak for themselves. The difficulty of placing it rightly, in a government resting entirely on the basis of periodical elections, will as readily be perceived, when it is considered that the most conspicuous characters in it will, from that circumstance, be too often the leaders or the tools of the most cunning or the most numerous faction, and on this account, can hardly be expected to possess the requisite neutrality towards those whose conduct may be the subject of scrutiny.”

“Where else than in the Senate could have been found a tribunal sufficiently dignified, or sufficiently independent? What other body would be likely to feel CONFIDENCE ENOUGH IN ITS OWN SITUATION, to preserve, unawed and uninfluenced, the necessary impartiality between an INDIVIDUAL accused, and the REPRESENTATIVES OF THE PEOPLE, HIS ACCUSERS?”
(caps in original).

“So far as might concern the misbehavior of the Executive in perverting the instructions or contravening the views of the Senate, we need not be apprehensive of the want of a disposition in that body to punish the abuse of their confidence or to vindicate their own authority. We may thus far count upon their pride, if not upon their virtue. And so far even as might concern the corruption of leading members, by whose arts and influence the majority may have been inveigled into measures odious to the community, if the proofs of that corruption should be satisfactory, the usual propensity of human nature will warrant us in concluding that there would be commonly no defect of inclination in the body to divert the public resentment from themselves by a ready sacrifice of the authors of their mismanagement and disgrace.”