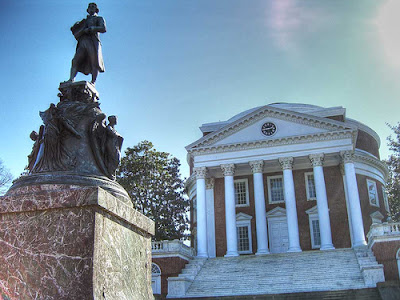 Just outside of the Rotunda at the University of Virginia stands a statue of Thomas Jefferson, sculpted by Moses Ezekiel, and “presented to the people” on May 25, 1910.  When I first visited the University in May 2004, as I admired this great work of art, I noticed the inscription on the upper base of the statue which reads:  “TO PERPETUATE THE TEACHINGS AND EXAMPLES OF THE FOUNDERS OF THE REPUBLIC.” I was profoundly impressed with the spirit and significance of this statement.  I reflected upon it much, recorded it in my journal, and later decided that this testimonial should serve as basis for the Charter of The Washington, Jefferson & Madison Institute.

As conveyed by the words of this inscription, it is incumbent upon each of us to study and ponder America’s Founding Documents and the writings and lives of our Founding Fathers. Thomas Jefferson said: “If a nation expects to be ignorant and free, in a state of civilization, it expects what never was and never will be.”[1] He also stated: “I know of no safe depository of the ultimate powers of the society but the people themselves; and if we think them not enlightened enough to exercise their control with a wholesome direction, the remedy is not to take it from them, but to inform their discretion by education. This is the true corrective of abuses of constitutional power.”[2] The diffusion of knowledge and an enlightened citizenry are essential elements required to maintain liberty.

We may ask, have we studied and learned the principles of the Constitution in the tradition of the Founding Fathers? Are the Constitution and principles of liberty expounded by the Founding Fathers being taught in our schools? Has their history been diluted? Abraham Lincoln stated: “Let it [reverence for the laws and Constitution] be taught in schools, seminaries and in colleges; let it be written in primers, in spelling books and in almanacs; let it be preached from the pulpit, proclaimed in legislative halls, enforced in courts of justice. In short, let it become the political religion of the nation.”[3]

In his Inaugural Address on April 30, 1789, as our nation’s first President under the newly adopted Constitution, George Washington said: “The preservation of the sacred fire of liberty, and the destiny of the republican model of government, are justly considered deeply, perhaps as finally, staked on the experiment entrusted to the hands of the American people.”[4]  Vigilance in learning and imparting liberty's knowledge is part of liberty's price.
[1] Thomas Jefferson to Charles Yancey, 1816. ME 14:384.
[2] Thomas Jefferson to William C. Jarvis, 1820. ME 15:278.
[3] Abraham Lincoln, Speeches and Writings: 1832-1858, Don Fehrenbacher, ed. (Library of America, New York, 1989), pp. 32-33.
[4]  Saxe Commins, ed., Basic Writings of George Washington (Random House, New York, 1948), p. 560.
Posted by J. David Gowdy at 10:03 PM No comments: