James Madison and the Teaching of the Constitution 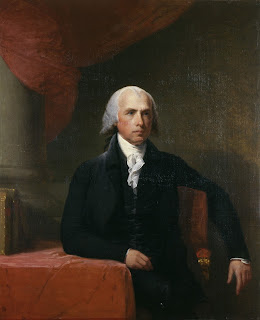 On February 8th, 1825, James Madison replied to Thomas Jefferson from Montpelier regarding the teaching of the Constitution at the newly established University of Virginia.  Madison sat on its Board of Visitors along with  Thomas Jefferson, the university's founder and Rector. Jefferson had previously written to ask his long time friend and political collaborator to advise concerning the proposed constitutional curriculum. In this letter Madison sets forth his thoughts on the best sources of the principles or "true doctrines of liberty" exemplified by the Constitution. In the end, he recommends using the Declaration of Independence, the Federalist Papers, the Virginia Resolutions and Washington's Inaugural and Farewell Addresses as the "best guides" to the "distinctive principles" of the Government of the United States.  His recommendations were largely adopted by the Board of Visitors of the University by a resolution on March 4, 1825. See: http://www.liberty1.org/UVA1825.pdf
Following is the primary text of Madison's letter, and his sketch for the teaching of the Constitution, which should be instructive to all citizens of the republic and students of the Constitution -- from the "father" of this, our great charter of freedom and self-government:

Dear Sir:
…I have looked with attention over your intended proposal of a text book for the Law School. It is certainly very material that the true doctrines of liberty, as exemplified in our Political System, should be inculcated on those who are to sustain and may administer it. It is, at the same time, not easy to find Standard books that will be both guides & guards for the purpose. Sydney & Locke are admirably calculated to impress on young minds the right of Nations to establish their own Governments, and to inspire a love of free ones; but afford no aid in guarding our Republican Charters against constructive violations. The Declaration of Independence, tho’ rich in fundamental principles, and saying every thing that could be said in the same number of words, falls nearly under a like observation. The “Federalist” may fairly enough be regarded as the most authentic exposition of the text of the federal Constitution, as understood by the Body which prepared & the Authorities which accepted it. Yet it did not foresee all the misconstructions which have occurred; nor prevent some that it did foresee. And what equally deserves remark, neither of the great rival parties have acquiesced in all its Comments. It may nevertheless be admissible as a School book, if any will be that goes so much into detail. It has been actually admitted into two Universities, if not more, those of Harvard & Rhode Island; but probably at the choice of the Professors, without an injunction from the superior authority. With respect to the Virginia Document of 1799, there may be more room for hesitation. Tho’ corresponding with the predominant sense of the Nation; being of local origin & having reference to a state of parties not yet extinct, an absolute prescription of it, might excite prejudices against the University as under Party Banners, and induce the more bigoted to withhold from it their sons, even when destined for other than the studies of the Law School. It may be added that the Document is not, on every point, satisfactory to all who belong to the same party. Are we sure that to our brethren of the Board it is so? In framing a political Creed, a like difficulty occurs as in the case of religion though the public right be very different in the two cases. If the Articles be in very general terms, they do not answer the purpose: if in very particular terms, they divide & exclude where meant to unite & fortify. The best that can be done in our case seems to be, to avoid the two extremes, by referring to selected Standards without requiring an unqualified conformity to them, which indeed might not in every instance be possible. The selection would give them authority with the Students, and might control or counteract deviations of the Professor. I have, for your consideration, sketched a modification of the operative passage in your draught, with a view to relax the absoluteness of its injunction, and added to your list of Documents, the Inaugural Speech and the Farewell Address of President Washington. They may help down what might be less readily swallowed, and contain nothing which is not good; unless it be the laudatory reference in the Address to the Treaty of 1795 with G. B. which ought not to weigh against the sound sentiments characterizing it.

After all, the most effectual safeguard against heretical intrusions into the School of politics, will be an Able & Orthodox Professor, whose course of instruction will be an example to his Successors, and may carry with it a sanction from the Visitors.
Affectionately yours,
James Madison

[Enclosure] Sketch: And on the distinctive principles of the Government of our own State, and of that of the United States, the best guides are to be found in: 1. The Declaration of Independence, as the fundamental Act of Union of these States. 2. The book known by the title of the “Federalist,” being an Authority to which appeal is habitually made by all & rarely declined or denied by any, as evidence of the general opinion of those who framed & those who accepted the Constitution of the U. States, on questions as to its genuine meaning. 3. The Resolutions of the General Assembly of Virginia in 1799 on the subject of the Alien & Sedition laws, which appeared to accord with the predominant sense of the people of the U. S. 4 The Inaugural Speech and Farewell Address of President Washington, as conveying political lessons of peculiar value; and that in the branch of the School of law which is to treat on the subject of Government these shall be used as the text & documents of the School.[1] 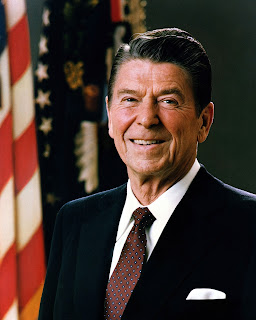 Ronald Wilson Reagan (February 6, 1911 – June 5, 2004) was an American politician who served as the 40th President of the United States from 1981 to 1989. Prior to the presidency, he was a Hollywood actor and union leader before serving as the 33rd Governor of California from 1967 to 1975. As President of the United States he inspired a generation and his term saw a restoration of prosperity at home, with the goal of achieving “peace through strength” abroad. Notably, through his convictions and moral force as a leader, he led an end to the Cold War with the Soviet Union, and he is credited with helping bring down the Berlin Wall, with his famous words spoken on June 12, 1987, at the Brandenburg Gate: “General Secretary Gorbachev, if you seek peace, if you seek prosperity for the Soviet Union and Eastern Europe, if you seek liberalization, come here to this gate. Mr. Gorbachev, open this gate. Mr. Gorbachev, tear down this wall!” In 2011, anti-communist leader Lech Walesa unveiled a statue of Ronald Reagan in Warsaw, honoring the late U.S. president for inspiring Poland's own overthrow of communism. Here are a few of my favorite Reagan quotes:

“We must reject the idea that every time a law’s broken, society is guilty rather than the lawbreaker. It is time to restore the American precept that each individual is accountable for his actions.”

“Government's first duty is to protect the people, not run their lives.”

“The ultimate determinate in the struggle now going on for the world will not be bombs and rockets but a test of wills and ideas - a trial of spiritual resolve; the values we hold, the beliefs we cherish and the ideas to which we are dedicated.”

“I hope we have once again reminded people that man is not free unless government is limited. There's a clear cause and effect here that is as neat and predictable as a law of physics: as government expands, liberty contracts.”

“I believe we can embark on a new age of reform in this country and an era of national renewal. An era that will reorder the relationship between citizen and government, that will make government again responsive to people, that will revitalize the values of family, work, and neighborhood and that will restore our private and independent social institutions. These institutions always have served as both buffer and bridge between the individual and the state—and these institutions, not government, are the real sources of our economic and social progress as a people.”


“If we lose freedom here [in America], there is no place to escape to. This is the last stand on Earth”

“We celebrated our 200th anniversary as a nation a short time ago. Fireworks exploded over Boston harbor, Arthur Fiedler conducted, thousands cheered and waved Old Glory. These were not just images of a bicentennial; they were reminders of our birthright of freedom—and of generous, fervent patriotism that burns in America. A patriotism that shows itself sometimes in very unexpected places. Remember "baseball's designated patriot"—Rick Monday—an outfielder for the Chicago Cubs who on April 25, 1976, at Dodger Stadium grabbed our flag from two demonstrators who were trying to burn it in center field—and as he came off the field to the dugout, carrying the flag, thousands stood and cheered and then found themselves singing “God Bless America.”