The Federalist Papers & Publius: Architects of the Republic 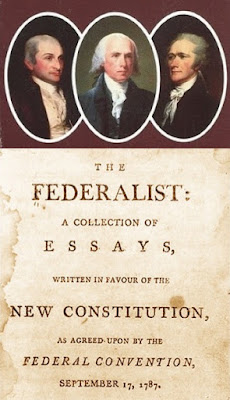 “The "Federalist" may fairly enough be regarded as the most authentic exposition of the text of the federal Constitution as understood by the Body [Constitutional Convention] which prepared & and the Authorities [state ratifying conventions] which accepted it.” --James Madison, Letter to Thomas Jefferson, February 8, 1825 (Peterson, 1974, 2. page 383).

The Washington, Jefferson & Madison Institute's is pleased to announce its next teacher education workshop on the topic of “The Federalist Papers: Architects of the Republic.” This event will honor the 230th anniversary of the publication of the Federalist (1788-2018) and is being co-sponsored by the George Washington Center for Constitutional Studies. The program will include 3 x 1.0 hour class sessions. Along with presentations, the format will include a “roundtable” discussion using original source documents with participation by all.

The outline of the sessions and agenda are as follows:

9:00–10:00 a.m. First Classroom Session -- "The Federalist and Human Nature." Presentation by Dr. Jeffry Morrison, Ph.D. (30-40 minutes): the role of human nature in the establishment and maintenance of a republic, representative government, separation of powers, federalism and the structure of the Constitution.  Followed by Q&A and discussion (20-30 minutes)

10:15–11:15 a.m. Second Classroom Session -- “The best commentary on Government ever written” (Thomas Jefferson) Roundtable Discussion: Review of the historical background of the Federalist Papers, their authors, their general purpose, and their significance to the American Founding and to classical political science. Discussion Chair: Dr. Jeffry Morrison, Ph.D.

The workshop is designed primarily for public and private Virginia secondary school teachers who teach Social Studies, U.S. Government, Virginia Government, or U. S. History. The workshop, meals and class materials all complimentary (no cost) to teachers.

The event will be held from 9:00 a.m. to 2:30 p.m. Friday, October 19th, 2018 at to be held at Prospect Hill Plantation Inn. The Seminar qualifies for four Virginia recertification points or 4 hours. Seating is limited. Teachers wishing to attend should pre-register. All registrations are requested by October 5th.

“We the People of the United States, in Order to form a more perfect Union…”

In the preamble, or the reason for its existence, the founders stated that the Constitution was designed and intended to form “a more perfect Union.”

What is the meaning of the word “Union” in this first phrase of the preamble?

How is the Union so formed “more perfect”?

With it as our guide, can we yet bring about an even “more perfect Union”?

Reflecting back, no doubt, the Constitution formed a better union than the Articles of Confederation. It also represented a better union than that offered to the American colonies by the King and Parliament of Great Britain. But, unlike any government ever before formed in history, the Constitution established a republic - based on liberty, equality, and natural rights.

As Lady Margaret Thatcher said when she spoke at Brigham Young University, “America, my friends, is the only country in the world actually founded on liberty— the only one. People went to America to be free. The Founding Fathers journeyed to this country across the perilous seas … to perpetuate freedom and justice more widely…. They believed, each and every one of them, in the sanctity of the individual … Those Pilgrim fathers came with the faith that infused the whole nation. Yours is the only nation founded on liberty.”[1]

When George Washington decided to step down from the Presidency near the end of his second term in office, he wrote his Farewell Address (1796). In this timeless Address to the American People – intended as his parting counsel to all citizens, both of his time, and future generations – Washington said, “Your union ought to be considered as a main prop of your liberty, and that the love of the one ought to endear to you the preservation of the other.” In other words, if we love liberty, we must also love and preserve the Union.

We might all agree that at no time in the history of our nation was the Union and the Constitution ever subjected to a greater test than during the Civil War. Our country was divided – literally, both ideologically and politically: North and South; States’ rights versus national unity; and human equality versus human subjection and slavery. Before the secession of South Carolina from the Union, before the guns were fired at Fort Sumter, before the first Battle of Manassas, a young man, born in Kentucky and raised in Indiana and Illinois, quietly read, studied and improved his knowledge of the American founding, growing both in his admiration for Washington and Jefferson, and for the Union and the Constitution. As he rose to prominence, first in his community, then in his home state of Illinois, this country lawyer and “rail splitter,” Abraham Lincoln, soon entered the national stage. Winning an unpredictable victory as the Republican Party’s candidate for the office of President of the United States, Lincoln was elected in November of 1860 with a nation already deeply fractured. Southern secession began the next month, and the War between the States commenced within six months. Scholars may debate the causes of the war, analyze its battles, and examine its effects, but one thing is clear – the Union once divided was restored, the Constitution was preserved, and the equality of all men was enshrined in the 13th Amendment. What motivated Lincoln to persevere and lead our nation through this tremendous ordeal?

He said: “I have never had a feeling politically that did not spring from the sentiments embodied in the Declaration of Independence.”[2]  Lincoln felt deeply that in the Declaration, Jefferson introduced “an abstract truth, applicable to all men and all times …”[3]   I submit that it is the Declaration of Independence – and specifically its principles – that enabled Lincoln and our Union to withstand this great test. It is the foundation upon which the Constitution was built, and the only foundation upon which it will survive.

Concerning the relationship of the Declaration of Independence to the Constitution, Lincoln wrote the following meditation on Proverbs 25:11 (which was discovered in his personal papers after his death) – “A word fitly spoken is like apples of gold in pictures of silver.”

“[The prosperity of the United States] is not the result of accident. It has a philosophic cause. Without the Constitution and the Union, we could not have attained the result; but even these are not the primary cause of our great prosperity. There is something back of these, entwining itself more closely about the human heart. That something, is the principle of "Liberty to all" -- the principle that clears the path for all -- gives hope to all -- and, by consequence, enterprise and industry to all.

The expression of that principle, in our Declaration of Independence, was most happy, and fortunate. Without this, as well as with it, we could have declared our independence of Great Britain; but without it, we could not, I think, have secured our free government and consequent prosperity. The assertion of that principle, at that time, was the word "fitly spoken" which has proven an "apple of gold" to us. The Union, and the Constitution, are the picture of silver, subsequently framed around it. The picture was made, not to conceal, or destroy the apple; but to adorn and preserve it. The picture was made for the apple -- not the apple for the picture.” [4]

The basic principles of the Declaration of Independence are not law, but they are America’s soul. Without these principles the Constitution has no lasting meaning -- and devoid of such principles, the Constitution and the Union will eventually fail in their grand purposes – the preservation of liberty and the equal rights of man.

Reflect and ponder for a moment on these self-evident truths of the Declaration, which begin with these words, “When in the Course of Human Events”...

“The Laws of Nature and of Nature's God”  -- are the foundation of the political principles of American independence. As set forth in the writings of Locke & Sidney, it means that nature has inherent laws by which each individual has a conscience, accountability for one’s actions, and a duty to not harm others or their property.

“We hold these truths to be self evident” -- confirms that there are certain truths that all people are bound to acknowledge, such as the equality of the rights of man, including the right to govern his life and property. “…that all men are created equal" -- As Locke wrote, “…all men by Nature are equal… being that equal Right that every Man hath, to his natural Freedom, without being subjected to the Will or Authority of any other Man.”[5]  We are all equal in the eyes of our Creator, equal in our natural rights, and equal before the law.

“…that they are endowed by their Creator with certain unalienable Rights, that among these are Life, Liberty and the pursuit of Happiness.” -- A religious people rose in rebellion against Great Britain in 1776, and the vast majority of American colonists believed in God, the Bible, and in the creation of man. Two years before drafting the Declaration, Thomas Jefferson wrote in 1774: “The God who gave us life gave us liberty at the same time; the hand of force may destroy, but cannot disjoin them.”[6]

And finally, “…the consent of the governed” -- Governments are properly the result of the choice of the governed. As John Jay wrote in Federalist No. 2, “Nothing is more certain than the indispensable necessity of government; and it is equally undeniable that whenever and however it is instituted, the people must cede [or delegate] to it some of their natural rights, in order to vest it with requisite powers.” “We the people” are sovereign and all proper governmental power is delegated power.