Religion and the American Founding 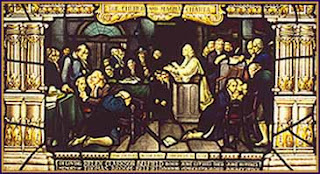 The Washington, Jefferson & Madison Institute is pleased to announce that its next Seminar for Virginia Secondary School Teachers will be held on Friday,  February 17, 2012 from 9:00 am to 1:00 pm at Prospect Hill near Charlottesville, Virginia.  The topic will be "Religion and the Founding of the American Republic."  One of the best resources for this subject may be found online at the Library of Congress: http://www.loc.gov/exhibits/religion/  In addition to the online materials, the exhibition with over 200 works of art and artifacts previously toured various locations in the United States.  (The exhibition and related programs are made possible by generous grants from The Pew Charitable Trusts, Mr. and Mrs. Henry J. (Bud) Smith, and the Lilly Endowment Inc.).  As stated on the Library of Congress website:

This exhibition demonstrates that many of the colonies that in 1776 became the United States of America were settled by men and women of deep religious convictions who in the seventeenth century crossed the Atlantic Ocean to practice their faith freely. That the religious intensity of the original settlers would diminish to some extent over time was perhaps to be expected, but new waves of eighteenth century immigrants brought their own religious fervor across the Atlantic and the nation's first major religious revival in the middle of the eighteenth century injected new vigor into American religion. The result was that a religious people rose in rebellion against Great Britain in 1776, and that most American statesmen, when they began to form new governments at the state and national levels, shared the convictions of most of their constituents that religion was, to quote Alexis de Tocqueville's observation, indispensable to the maintenance of republican institutions. The efforts of the Founders of the American nation to define the role of religious faith in public life and the degree to which it could be supported by public officials that was not inconsistent with the revolutionary imperatives of the equality and freedom of all citizens is the central question which this exhibition explores."


The Institute's Seminar will explore the topics of "The Role of Religion in the American Revolution," "George Washington and the Hand of Providence," "Jefferson, Madison and the Virginia Statute for Religious Freedom," and "Thomas Jefferson and Religion."  This continuing education seminar is being offered at no cost (luncheon included) to U.S. Government and U.S. History high school and middle school teachers including, but not limited to, teachers in Albemarle, Amherst, Augusta, Bedford, Campbell, Fluvanna, Greene, Louisa, Nelson, Orange and Richmond Counties.  For early registration, or to receive an agenda, please contact Jody Weierholt, Event Coordinator: jody@wjmi.org.
Posted by J. David Gowdy at 6:10 PM No comments: