Alexander Hamilton, Natural Rights, and the Purposes of American Government 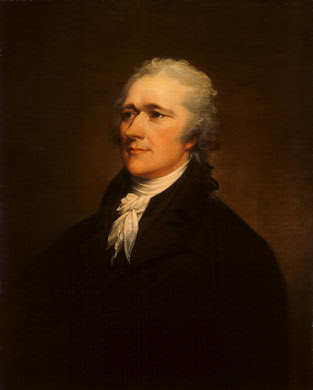 By: Tony Williams
In 1825, near the end of his life (which, of course, occurred on the fiftieth anniversary of the Declaration of Independence), Thomas Jefferson wrote a letter to Henry Lee regarding the intent and sources of the Declaration of Independence.  Jefferson freely admitted that his lasting contribution to explaining the causes of separation and defining the purposes of American government was not entirely original.

This was the object of the Declaration of Independence. Not to find out new principles, or new arguments, never before thought of, not merely to say things which had never been said before; but to place before mankind the common sense of the subject, in terms so plain and firm as to command their assent, and to justify ourselves in the independent stand we are compelled to take. Neither aiming at originality of principle or sentiment, nor yet copied from any particular and previous writing, it was intended to be an expression of the American mind, and to give to that expression the proper tone and spirit called for by the occasion. All its authority rests then on the harmonizing sentiments of the day, whether expressed in conversation, in letters, printed essays, or in the elementary books of public right, as Aristotle, Cicero, Locke, Sidney, &c. …[1]

Jefferson was correct: many patriots were expressing the same argument for natural rights from God and republican self-government based upon the consent of the governed.  One such essay was written in 1775 by a precocious young New York college student who had recently emigrated from the West Indies and immediately joined the patriot cause especially after the Boston Tea Party and repressive Coercive Acts that violated the liberties of New Englanders.

Tory Anglican minister, Rev. Samuel Seabury, of New York, printed a scathing attack on the Continental Congress and questioned the legality of its continental association which banned imports from Great Britain as Americans had repeatedly done for a decade to protest British tyranny.  He called the Congress “a venomous brood of scorpions” who threatened to “sting us to death.”[2]

The young man, Alexander Hamilton, immediately took up his pen and responded to Seabury with a couple of lengthy pamphlets entitled A Full Vindication of Congress and Farmer Refuted.  Farmer Refuted was an essay that demonstrated the veracity of Jefferson’s claim that the principles he laid out in the Declaration of Independence were circulating among patriots throughout the American colonies.

Hamilton begins his argument by refuting Seabury’s contention that Hamilton’s state of nature (imaging the nature of man before government existed) would be a Hobbesian world free of moral restraint and be a “war of all against all.”  Contrarily, Hamilton argues that God created a natural moral law that was “an eternal and immutable law, which is indispensably obligatory upon all mankind.”  He quotes Blackstone (and, indirectly, St. Augustine, St. Thomas Aquinas, and others) for support that, “No human laws are of any validity, if contrary to this.”

So, Hamilton contends that there is a fabric of morality sown into human nature.  He also maintains that human beings are endowed by their Creator with reason to discover this moral law as well as with natural rights built into their natures.
Upon this law depend the natural rights of mankind: the Supreme Being gave existence to man, together with the means of preserving and beautifying that existence.  He endowed him with rational faculties, by the help of which to discern and pursue such things . . . and invested him with an inviolable right to personal liberty and personal safety.[3]

In the Declaration of Independence, Jefferson wrote that, “We hold these truths to be self-evident, that all men are created equal, that they are endowed by their Creator with certain unalienable rights, that among these are life, liberty, and the pursuit of happiness.”[4]  Hamilton makes the same argument for God-given rights with an eloquence rivaling Jefferson:

The sacred rights of mankind are not to be rummaged for among old parchments or musty records.  They are written, as with a sunbeam in the whole volume of human nature, by the hand of Divinity itself, and can never be erased or obscured by mortal power.

In the Declaration of Independence, Jefferson also stated that republican self-government was based upon a social contract (from John Locke) with the purpose of protecting natural rights.  “That to secure these rights, governments are instituted among men, deriving their just powers from the consent of the governed.”  Hamilton agrees, quoting Blackstone again, that the “principal aim of society is to protect individuals in the enjoyment of those absolute rights which were vested in them by the immutable laws of nature . . . the first and primary end of human laws is to maintain and regulate these absolute rights of individuals.”  In his own words, Hamilton strongly agrees with the consensual origins of government and its purpose to protect individual rights.

The origin of all civil government, justly established, must be a voluntary compact between the rulers and ruled, and must be liable to such limitations as are necessary for the security of the absolute rights of the latter; for what original title can any man, or set of men, have to govern others, except their own consent?

Hamilton and Jefferson agreed that a tyrannical government was defined by stripping the people of their natural rights, thereby violating the very purpose for which it was created.  It broke the social contract, and the people had the right to disobey its laws and rebel.  Jefferson stated, “That whenever any form of government becomes destructive of these ends, it is the right of the people to alter or to abolish it, and to institute new government . . . as to them shall seem most likely to effect their safety and happiness.”  In Farmer Refuted, Hamilton also contends that there is a right of rebellion against tyrannical government.

To usurp dominion over a people in their own despite, or to grasp at a more extensive power than they are willing to intrust, is to violate the law of nature which gives every man a right to his personal liberty, and can therefore confer no obligation of obedience.

The Lockean ideas that God endowed all humans with natural rights embedded into their humanity and that government was a social compact established to protect those rights but forfeited its right to popular obedience when it failed to fulfill this purpose was at the philosophical foundations of the creation of the American republic in 1776.  These principles found their most popular and well-known expression in the Declaration of Independence, but they had been stated by numerous others including the pamphlets of James Otis and Richard Bland, George Mason in the Virginia Declaration of Rights, and an essay written in 1775 by a young genius who embraced the principles of the glorious cause for liberty.

In his later defense of the Constitution as Publius in Federalist #84, Hamilton wrote that, “The Constitution is itself, in every rational sense, and to every useful purpose, a BILL OF RIGHTS.”[5]  What he meant is that the proposed Constitution was a written framework of government established in a social contract of the sovereign people through deliberation with the very purpose of protecting natural rights.  Thereby, he weaved the seamless ideals of Farmer Refuted (and the Declaration of Independence) to the Constitution into a single garment of American self-government.

Or, as Abraham Lincoln put it so poetically, the Constitution created a republican government to protect the natural rights in the Declaration of Independence.

The assertion of that principle, at that time, was the word, “fitly spoken” which has proved an “apple of gold” to us. The Union, and the Constitution, are the picture of silver, subsequently framed around it. The picture was made, not to conceal, or destroy the apple; but to adorn, and preserve it. The picture was made for the apple–not the apple for the picture.  So let us act, that neither picture, or apple shall ever be blurred, or bruised or broken.
Tony Williams is the Program Director of the Washington, Jefferson & Madison Institute, which is hosting a seminar on Alexander Hamilton and the Constitution to commemorate Constitution Day.