The Color of Jefferson's World 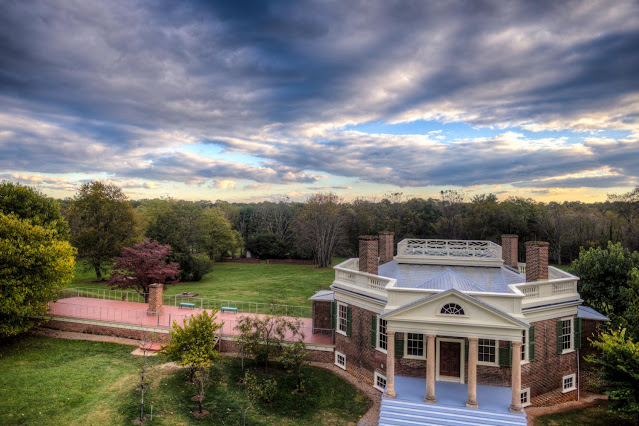 Much has been written about Thomas Jefferson’s mountain-top home of Monticello, the timeless showcase of Jefferson’s architectural brilliance. It is here where we see how he incorporates classical Greek and Roman design with his own innovative features of the alcove bed, triple sash windows, and octagonal shaped rooms. But what about his use of color, one of the most important elements of design? Even a quick study of Jefferson will show that little in his life was left to chance. So, if that is the case, one could argue that the colors he chose were intentional. What can his paint colors tell us about him, if anything?

A Monticello guide told us that Jefferson “loved a good dinner party and the latest fashion” which was colorfully confirmed as we entered the dining room. Not so long ago, the walls of this room were colonial Williamsburg blue, but after 20 years of analysis by Welsh Color and Conservation, Inc. the room has been restored to the color that Jefferson painted it in 1815. Monticello curator, Susan R. Stein described the chrome-yellow paint color “as the color of an egg yolk from a chicken that dined on marigold petals” (Tackett). At the time Jefferson painted this room he was 72 years old. His service as President of the United States had ended six years earlier, and he had just sold his books to Congress. Is it possible that any of these events influence his decision to splurge on a color that “cost $5.00 per pound, twice as expensive as Blue Prussian and 33 times as expensive as white lead” (Monticello)? Or, was it innately just Jefferson, the man who was a dichotomy for all time … classical yet contemporary, methodical yet excessive, private yet bon vivant?

Jefferson’s dining room choice intentionally moved beyond what has been identified as classic English Georgian, colors of burgundy, sage green, Wedgewood blue and dusky pink – to bold colors that declare contemporary, fashionable, and expensive. Besides showing his preference for French design this choice also indicates that Jefferson was continually drawn to new ideas, developments, and thoughts, as the new yellow hue had been recently invented. His grand-daughter, Ellen Randolph Coolidge described Monticello as a “feast of reason and a flow of soul” (Monticello), and with the dining room being the center of both entertainment and enlightenment, Jefferson would have purposely designed this space for both beauty and the flow of modern ideas. Jefferson’s innovative use of colors continued in the two-tiered, grey-blue and yellow, wainscot of the entrance hall.

While the portion above the chair-rail is whitewashed, allowing emphasis to the artifacts, maps, and pictures, the bottom portion was given to joining the wall to the painted green pine floor, a color Jefferson called grass, which had been personally suggested to him by portraitist Charles Wilson Peale. Quite likely, Jefferson appreciated both the aesthetics and the practicality of a painted floor. He continued to push the limits of innovation and style with his colors.

More painted walls can be found in Martha’s sitting room and in Jefferson’s private space. Both rooms are shades of blue.

The dome room upstairs, which can only be seen in pictures, was restored to its original brilliant yellow hue. Welsh, in his Monticello project paper states that “documentary evidence indicates that Jefferson was intimately involved in the selection of paint finishes, colors and wallpapers.” We can assume then that just as he had picked the yellow color of the dining room, he also picked these colors with a purpose, whether it was for light, tranquility, interest, fashion, or a success statement.

And yet, there are rooms in the mansion which have been left with unpainted white plaster. Welsh informs us that through paint archeology and analyses Jefferson embraced white as his primary color on both the wood trim and the plaster which he contrasted with “stunning colors, such as yellow and green, and imitative, and varnished mahogany … [and] colorful patterned and plain French wallpapers.” The visible use of color and lack of throughout the rooms of Monticello according to Welsh are “distinctly individual” and remain as evidence of the underlying principles of aesthetic Jefferson used in his design.

Observation and a simple study of Jefferson’s paint colors allows visitors of Monticello to draw a few conclusions. The chrome-yellow color was by far his most bold choice, and as stated earlier, was incorporated into the design of Monticello late in his life. Possibly he chose the brilliant yellow to signify not only his fondness for “all that is French” (Tackett), but also because he was truly happy to be back home at his beloved Monticello with his family. I propose that his unpainted plaster walls are symbolic of the simple life he sought -- time to read, to write, to reflect, all essential components to his well-being, but sometimes overshadowed by his own unrelenting interest in the world around him which would not allow him to be silent. I suggest that the blue walls in his private quarters exemplify the tranquility he sought out of the public eye, which contrast the main entrance’s dazzling green floors that welcomed people into his world. In conclusion, I would submit that Jefferson used colors in his home, like he used words on the page, to emphasize what was most important to him … home, family, friendships, knowledge, education, country, beauty, or in his own words, “life, liberty and the pursuit of happiness.”
________________________
Photo: Jefferson's Poplar Forest