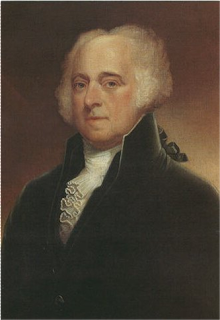 Speaking of the debates for Independence in the Continental Congress in 1776, thirty-seven years afterwards, Thomas Jefferson declared that, "Mr. Adams was the pillar of its support on the floor of Congress, its ablest advocate and defender against the multifarious assaults it encountered." At another time, he said, "John Adams was our Colossus on the floor. Not graceful, not elegant, not always fluent in his public addresses, he yet came out with a power both of thought and of expression which moved us from our seats." (B. L. Rayner, “Life of Thomas Jefferson” Lilly, Wait, Colman, & Holden, Boston, 1834, p. 90).

The Washington, Jefferson & Madison Institute is pleased to announce that its next continuing education workshop will be on the topic of “John Adams: Colossus of Independence.” The program will include four, 50-minute sessions, each led by a moderator with an open discussion focused on original source documents. Instead of lectures or presentations, the format of the "roundtable" will be a civic conversation that draws deeply on the documents with participation by all. If you would like to participate in the roundtable, we ask you to prepare by doing the document readings (about 50 pages) and coming ready to discuss with your fellow teachers. After you register we will email you the Reader (or mail if you prefer a hard copy). Copies of the Reader will be provided at the conference as well.

WJMI welcomes the following panel of moderators to this conference:

Jeffry H. Morrison, Director of Academics at the James Madison Memorial Fellowship Foundation and Professor of Government at Regent University.

The outline of the sessions are as follows:

1. Legal and Religious Roots of Resistance to Great Britain

2. The Declaration of Independence and Political Philosophy

3. The Adams’ Presidency - Acts and Writings

4. The Adams-Jefferson Letters: An Intellectual Dialogue

The Reader, a continental breakfast, as well as a luncheon, are all complimentary. The roundtable is primarily for public and private Virginia secondary school teachers who teach Social Studies, U.S. Government, Virginia Government, or U. S. History.

The workshop will be held from 9:00 a.m. to 12:30 p.m. Friday morning, March 24th, 2017 at Prospect Hill Plantation Inn 2887 Poindexter Rd, Louisa, Virginia near Charlottesville. Registration will begin at 8:30 a.m. with a continental breakfast. The luncheon will be from 12:30 to 1:30 p.m. The Seminar qualifies for four recertification points or 4 hours.

If you wish to attend, please Contact Us.
Posted by J. David Gowdy at 9:28 PM No comments: