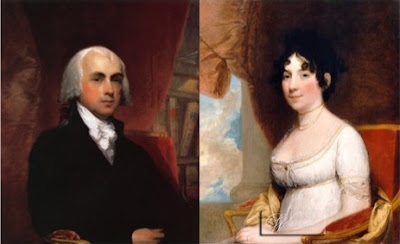 The Romance of John and Abigail Adams 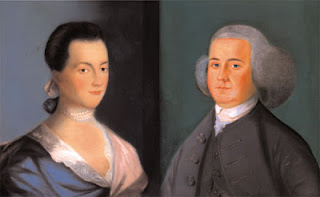 “John Adams, a 24-year-old lawyer in Braintree, Massachusetts, first met the teenage Abigail Smith in the summer of 1759 at her father’s home in Weymouth. John’s initial impressions were less than complimentary: “Not fond, not frank, not candid” was the overall assessment in his diary. But from these inauspicious beginnings a romance developed that would sustain this most famous of American couples through fifty years of marriage, five children (three of whom they outlived), multiple homes in numerous cities and towns across three countries and two continents, lengthy separations, and all the rigors of eighteenth-century life—not to mention a revolution, wars, and a wide array of political and diplomatic crises.
What we know of John and Abigail’s relationship stems largely from the letters they wrote to one another, of which some 1,160 have survived to the present day. Their earliest extant note, written from John to Abigail in October 1762, shows just how much had changed between them in the three short years since they first met. “Miss Adorable,” John wrote. “By the same Token that the Bearer hereof satt up with you last night I hereby order you to give him, as many Kisses, and as many Hours of your Company after 9 O Clock as he shall please to Demand and charge them to my Account.” In time their flirtatious correspondence evolved to reflect a deeper, more abiding relationship, but they never lost what Abigail described as “that unabated affection which has for years past, and will whilst the vital spark lasts, burn in the Bosom of your affectionate A Adams.”
Along with that affection and intimacy, Abigail and John proved to be kindred spirits, with shared interests in and a common outlook on the world around them. Abigail had never received a formal education, but her access to some of the finest libraries in Massachusetts and her voracious love of reading gave her a wide-ranging knowledge that allowed her easily to serve as John’s equal in any intellectual debate. Her place as John’s primary political advisor was merely a logical extension of her role as wife and manager of their household in a partnership of equals.
Their letters not only reflected this emotional and intellectual interdependence; they also became symbols of it.”
(Margaret A. Hogan is Managing Editor of the Adams Papers at the Massachusetts Historical Society and Coeditor with C. James Taylor of  "My Dearest Friend: Letters of Abigail and John Adams" http://harvardpress.typepad.com/off_the_page/2008/02/the-romance-of.html)
This tender letter was written by Abigail to John after eighteen years of marriage:
My Dearest Friend,
…should I draw you the picture of my Heart, it would be what I hope you still would Love; tho it contained nothing new; the early possession you obtained there; and the absolute power you have ever maintained over it; leaves not the smallest space unoccupied. I look back to the early days of our acquaintance; and Friendship, as to the days of Love and Innocence; and with an indescribable pleasure I have seen near a score of years roll over our Heads, with an affection heightened and improved by time -- nor have the dreary years of absence in the smallest degree effaced from my mind the Image of the dear untitled man to whom I gave my Heart...
(December 23, 1782)
Posted by J. David Gowdy at 12:50 AM No comments: 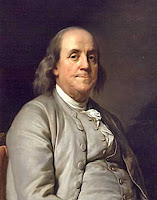 “[Benjamin Franklin] ended up in Philadelphia, a place unlike much of the world. There were Lutherans and Moravians and Quakers and even Jews, as well as Calvinists, living side by side in what became known as the City of Brotherly Love. Franklin helped formulate the creed that they would all be better off, personally and economically, if they embraced an attitude of tolerance.
Franklin believed in God and in the social usefulness of religion, but he did not subscribe to any particular sectarian doctrine. This led him to help raise money to build a new hall in Philadelphia that was, as he put it, "expressly for the use of any preacher of any religious persuasion who might desire to say something." He added, "Even if the Mufti of Constantinople were to send a missionary to preach Mohammedanism to us, he would find a pulpit at his service."
He also wrote parodies that poked fun at Puritan intolerance. In one of them, called "A Witch Trial at Mount Holly," a couple of accused witches were subjected to two tests: weighed on a scale against the Bible, and tossed in the river with hands and feet bound to see if they floated. They agreed to submit--on the condition that two of the accusers take the same test. With colorful details of all the pomp, Franklin described the process. The accused and accusers all succeed in outweighing the Bible. But both of the accused and one of the accusers fail to sink in the river, thus indicating that they are witches. The more intelligent spectators conclude that most people naturally float. The others are not so sure and resolve to wait until summer when the experiment could be tried with the subjects unclothed.
Franklin's freethinking unnerved his family. When his parents wrote of their concern over his "erroneous opinions," Franklin replied with a letter that spelled out a religious philosophy based on tolerance that would last his life. It would be vain for any person to insist that "all the doctrines he holds are true and all he rejects are false." The same could be said of the opinions of different religions. He had little use for the doctrinal distinctions his mother worried about. "I think vital religion has always suffered when orthodoxy is more regarded than virtue. And the Scripture assures me that at the last day we shall not be examined by what we thought, but what we did ... that we did good to our fellow creatures…"
By the end of his life, he had contributed to the building funds of each and every sect in Philadelphia, including £5 for the Congregation Mikveh Israel for its new synagogue in April 1788. During the July 4 celebrations that year, he was too sick to leave his bed, but the parade marched under his window. For the first time, as per arrangements that Franklin had overseen, "the clergy of different Christian denominations, with the rabbi of the Jews, walked arm in arm."
And when he was carried to his grave two years later, his casket was accompanied by all the clergymen of the city, every one of them, of every faith.”
--Walter Isaacson, Citizen Ben’s 7 Great Virtues (Time Magazine, July 7, 2003)
____________________________
http://www.time.com/time/magazine/article/0,9171,1005149,00.html
Posted by J. David Gowdy at 7:47 PM No comments: