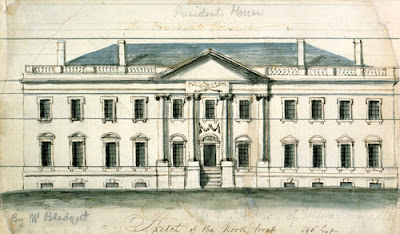 “When the second President of the United States, John Adams, moved into what would come to be known as the White House [in November 1800], the residence was cold, damp, and drafty. Sitting at the edge of a dreary swamp, the First Family had to keep 13 fireplaces lit in an effort to stay comfortable. It is in this setting that the cantankerous president held the first ever White House Christmas party in honor of his granddaughter, Susanna. It could be said that the invitations sent for this party were the very first White House Christmas cards, though in those early days, the building was referred to as the President’s Palace, Presidential Mansion, or President’s House.”

“The affair was planned in large part by the vivacious First Lady, Abigail Adams, and was considered a great success. A small orchestra played festive music in a grand ballroom adorned with seasonal flora. After dinner, cakes and punch were served while the staff and guests caroled and played games. The most amusing incident of the evening occurred when one of the young guests accidentally broke one of the First Granddaughter’s new doll dishes. Enraged, the young guest of honor promptly bit the nose off of one of the offending friend’s dolls. The amused president had to intervene to make sure the incident didn’t take an even uglier turn.”

Following in Adams’ footsteps, “Thomas Jefferson [the nation’s 3rd President] in 1805, six of his grandchildren and 100 of their friends – invited by Secretary of State James Madison’s wife, Dolley, who acted as official hostess – made for a tremendously enjoyable holiday party at which Jefferson played the violin for the dancing children. Christmas celebrations at the Jefferson White House were festive affairs where delicacies and local American foods were served.” “…These Christmas celebrations, hosted by the charming Dolley who made sure delicacies were enjoyed by all, continued through the years Jefferson was president.”

“When her husband [James Madison] succeeded his mentor as the master of the White House in 1809, the tradition of celebrating Christmas with White House parties – hosted by none other than Dolley – continued. Her holiday attire would usually include some purple peacock feathers atop a turban or cap covering her hair, along with her dress of lace and pink satin. Although there were neither White House Christmas cards exchanged nor a decorated Christmas tree in those years, the holiday tradition would include wonderful things to eat, as she would oversee the serving of seafood, stuffed goose, Virginia ham, and pound cake, as well as [fermented beverages]. She would lift her glass with the heartfelt toast, “Merry Christmas! God Bless America!”