Christopher Columbus and the New World 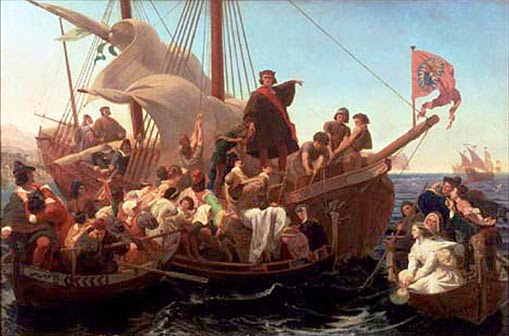 “Explorer and navigator Christopher Columbus was born in 1451 in the Republic of Genoa, Italy. In 1492, Columbus left Spain in the Santa Maria [image above], with the Pinta and the Niña along side. He has been credited for opening up the Americas to European colonization.

Columbus first went to sea as a teenager, participating in several trading voyages in the Mediterranean and Aegean seas. One such voyage, to the island of Khios, in modern day Greece, brought him the closest he would come to Asia.  His first voyage into the Atlantic Ocean in 1476 nearly cost him his life as the commercial fleet he was sailing with was attacked by French privateers off the coast of Portugal. His ship was burned and Columbus had to swim to the Portuguese shore and make his way to Lisbon, Portugal, where he eventually settled and married Felipa Perestrello. The couple had one son, Diego in about 1480. His wife died soon after and Columbus moved to Spain. He had a second son Fernando who was born out of wedlock in 1488 with Beatriz Enriquez de Arana.

Columbus participated in several other expeditions to Africa gaining knowledge of the Atlantic currents flowing east and west from the Canary Islands. Muslim domination of the trade routes through the Middle East makes travel to India and China difficult. Believing a route sailing west across the Atlantic would be quicker and safer, Columbus devised a plan to sail west to reach the East. He estimated the earth to be a sphere approximately 63% its actual size and the distance between the Canary Islands and Japan to be about 2,300 miles. Many contemporary nautical experts disagreed, adhering to the second century BC estimate of the earth's circumference at 25,000 miles. This made the distance between the Canary Islands and Japan about 12,200 statute miles. While experts disagreed with Columbus on matters of distance, they concurred that a westward voyage from Europe would be an uninterrupted water route.

Rejected by the Portuguese king for a three-ship voyage of discovery, Columbus took his plan first to Genoa and then to Venice but was rejected there too. He then went to the Spanish monarchy of Isabella of Castille and Ferdinand of Aragon, in 1486. Their nautical experts too were skeptical and initially, Columbus was rejected. The idea however, must have intrigued the monarchs, for they kept Columbus on a retainer. But their focus was on a war with the Muslims and Columbus would have to wait.

Columbus continued to lobby the royal court and soon after the Spanish army captured the last Muslim stronghold in Granada in January of 1492, the monarchs agreed to finance his expedition. In August, Columbus left Spain in the Santa Maria, with the Pinta and the Niña along side. After 36 days of sailing, [in the early hours of October 12, 1492] land was sighted, and after daybreak Columbus and his officers went ashore on a tiny island in the Bahamas called Guanahani by the natives. Columbus named it “San Salvador” (Holy Savior), claiming it for Spain. There he encountered a timid but friendly group of natives who were open to trade with the sailors exchanging glass beads, cotton balls, parrots and spears. The Europeans also noticed bits of gold the natives wore for adornment.

Columbus and his men continued their journey, visiting the islands of Cuba and Hispaniola (now Haiti and the Dominican Republic) and meeting with the leaders of the native population. During this time, the Santa Maria was wrecked on a reef off the coast of Hispaniola. With the help of some islanders, Columbus' men salvaged what they could and built the settlement Villa de la Navidad ("Christmas Town") with lumber from the ship. Thirty-nine men stayed behind to occupy the settlement. Convinced his exploration had reached Asia, he set sail for home with the two remaining ships.”[1]  Columbus would subsequently return to the New World on three more voyages.

Perhaps nothing has been more forgotten, and nothing irked his contemporaries more, than Columbus’s frank assertion that he was divinely chosen. “God made me the messenger of the new heaven and the new earth, of which He spoke in the Apocalypse of St. John after having spoken of it by the mouth of Isaiah,” Columbus wrote to a friend and confidant of the queen, “and he showed me where to find it.” [2]

Columbus was convinced that the key to his enterprise was the spiritual gifts given him by the Lord: “He bestowed the arts of seamanship upon me in abundance, and has given me what was necessary from [astronomy], geometry, and arithmetic; and has given me adequate inventiveness in my soul.” Columbus was certain that God provided these gifts to be used in His service, “encouraging me to go forward, and without ceasing they inflame me with a sense of great urgency.” [3]

Finally, in a letter to the king and queen of Spain (who financed his first voyage), he wrote, “Our Lord unlocked my mind, sent me upon the sea, and gave me fire for the deed. Those who heard of my [enterprise] called it foolish, mocked me, and laughed. But who can doubt but the Holy Ghost inspired me?” [4]

In recent decades Columbus has been portrayed as a greedy gold-seeker, a man guilty of genocide and a destroyer of the environment. "It became popular to view Columbus as the scapegoat, as a man you could blame every evil of the modern world on. That became the politically correct way to look at him. It’s like blaming Einstein for Hiroshima and Chernobyl.  Columbus opened up the new world ... but we shouldn’t blame him for everything that other people did wrong." – Clark B. Hinckley (author of biography on Columbus).
_______________________
Footnotes:
1.  http://www.biography.com/people/christopher-columbus-9254209 [edited]
2.  Columbus to Doña Juana de la Torre, Raccolta di documenti e studi pubblicati della R. Commissione Colombiana, pt. I, vol. ii; I Scriti di Cristoforo Colombo, ed. Cesare de Lollis (Rome: 1894), p. 66.
3.  Ibid., p. 79.
4.  Jacob Wasserman, Columbus, The Don Quixote of the Seas (New Brunswick: Rutgers University Press, 1959, pp. 19-20).