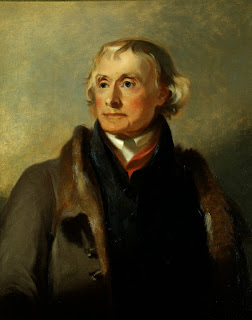 In January 1821, Professor Jared Mansfield wrote to Thomas Jefferson from West Point: "The Superintendent, Officers, Professors, Instructors, & Cadets of the United States Military Academy, impressed, with a high sense of the great services, you have rendered the Nation, & that this Institution, with which they are connected, originated under your patronage, & presidency, are anxious for some special, & appropriate memorial of your person, which may descend to posterity."[2]

The library at the U.S. Military Academy, Mansfield informed Jefferson, had portraits of George Washington and of Jonathan Williams, the academy's first superintendent. Would Jefferson, Mansfield asked, "gratify them" by sitting for Thomas Sully, one of the "best Portrait Painters of our Country," at Monticello?

By 1802, when President Jefferson established the United States Military Academy, he had fully embraced the importance of "useful sciences" in education and in the protection of the young nation. Two years earlier, Jefferson had written to Pierre S. du Pont de Nemours, asking: "What are the branches of science which in the present state of man, and particularly with us, should be introduced into an academy?" Du Pont proposed an all inclusive plan of national education with primary schools, colleges, and four specialty schools -- medicine, mines, social science and legislation, and "higher geometry and the sciences that it explains." With engineering "urging forward the other sciences," this school would be of the greatest benefit to the nation, du Pont explained. As he told Jefferson: "No nation is in such need of canals as the United States, and most of their ports have no means of exterior defense."

Just two months after Jefferson's inauguration, Secretary of War Henry Dearborn announced that the president had "decided in favor of the immediate establishment of a military school at West Point and also on the appointment of Major Jonathan Williams" to direct "the necessary arrangements, at that place for the commencement of the school."

On March 16, 1802, Jefferson affixed his name to the Military Peace Establishment Act, directing that a corps of engineers be established and "stationed at West Point in the state of New York, and shall constitute a Military Academy." The academy's sole function would be to train engineers, and Williams, grandnephew of Benjamin Franklin, was named superintendent. On July 4, 1802, the U.S. Military Academy formally opened for instruction. "Our guiding star," Superintendent Williams said, "is not a little mathematical School, but a great national establishment.  We must always have it in view that our Officers are to be men of Science, and as such will by their acquirements be entitled to the notice of learned societies."

In the War of 1812, the enemy British did not capture any works constructed by a graduate of West Point, and perhaps, as historian Henry Adams suggested, "had an engineer been employed at Washington -- the city would have been easily saved."

Jefferson's military academy, Adams wrote, had "doubled the capacity of the new little American army for resistance, and introduced and scientific character into American life." Jefferson himself said that he "ever considered that establishment as of major importance to our country, and in whatever I could do for it, I viewed myself as performing a duty."

Thomas Jefferson (April 13, 1743 – July 4, 1826) was author of the Declaration of Independence and the Statute of Virginia for Religious Freedom, third president of the United States, and founder of the University of Virginia. He, among all of the founders, voiced the aspirations of a new America as no other individual of his era. As public official, historian, philosopher, plantation owner, and family man, he served his country for over 50 years.  In addition, he was known as an avid inventor, architect and gardener.

In honor of his birthday, here are a few of my favorite quotes from Thomas Jefferson:

“The most fortunate of us, in our journey through life, frequently meet with calamities and misfortunes which may greatly afflict us; and, to fortify our minds against the attacks of these calamities and misfortunes, should be one of the principal studies and endeavours of our lives. The only method of doing this is to assume a perfect resignation to the Divine will, to consider that whatever does happen, must happen; and that by our uneasiness, we cannot prevent the blow before it does fall, but we may add to its force after it has fallen.” --Letter to John Page (15 July 1763)

“A lively and lasting sense of filial duty is more effectually impressed on the mind of a son or daughter by reading King Lear, than by all the dry volumes of ethics, and divinity, that ever were written.” --Letter to Robert Skipwith (3 August 1771)

“The God who gave us life, gave us liberty at the same time; the hand of force may destroy, but cannot disjoin them.” --Summary View of the Rights of British America (1774)

“[T]ruth is great and will prevail if left to herself; that she is the proper and sufficient antagonist to error, and has nothing to fear from the conflict unless by human interposition disarmed of her natural weapons, free argument and debate ; errors ceasing to be dangerous when it is permitted freely to contradict them.” --A Bill for Establishing Religious Freedom, Chapter 82 (1779)

“He who permits himself to tell a lie once, finds it much easier to do it a second and third time, till at length it becomes habitual; he tells lies without attending to it, and truths without the world's believing him. This falsehood of tongue leads to that of the heart, and in time depraves all its good dispositions.” --Letter to Peter Carr (19 August 1785)

“The spirit of resistance to government is so valuable on certain occasions, that I wish it to be always kept alive. It will often be exercised when wrong, but better so than not to be exercised at all. I like a little rebellion now and then. It is like a storm in the atmosphere.”
--Letter to Abigail Smith Adams from Paris while a Minister to France (22 February 1787)

“I had rather be shut up in a very modest cottage with my books, my family and a few old friends, dining on simple bacon, and letting the world roll on as it liked, than to occupy the most splendid post, which any human power can give.” --Letter to Alexander Donald (7 February 1788)

“I consider the foundation of the Constitution as laid on this ground: That "all powers not delegated to the United States, by the Constitution, nor prohibited by it to the States, are reserved to the States or to the people." To take a single step beyond the boundaries thus specially drawn around the powers of Congress, is to take possession of a boundless field of power, no longer susceptible of any definition.” -- Opinion against the constitutionality of a National Bank (1791)

“I have sworn upon the altar of god eternal hostility against every form of tyranny over the mind of man.” --Letter to Dr. Benjamin Rush (23 September 1800)

“The care of human life and happiness, and not their destruction, is the first and only legitimate object of good government.” --"To the Republican Citizens of Washington County, Maryland" (March 31, 1809)

“[W]hat more is necessary to make us a happy and a prosperous people? …A wise and frugal Government, which shall restrain men from injuring one another, shall leave them otherwise free to regulate their own pursuits of industry and improvement, and shall not take from the mouth of labor the bread it has earned.” --First Inaugural Address (4 March 1801)

“If a nation expects to be ignorant and free, in a state of civilization, it expects what never was and never will be.” --Letter to Colonel Charles Yancey (6 January 1816)

“It is in our lives, and not from our words, that our religion must be read. By the same test the world must judge me.” --Letter to Mrs. Harrison Smith (6 August 1816)

“Lay down true principles and adhere to them inflexibly.” --Letter to Samuel Kercheval (1816)

"Happiness is the aim of life. Virtue is the foundation of happiness."--Letter to William Short (October 31, 1819)

“I know no safe depository of the ultimate powers of the society but the people themselves; and if we think them not enlightened enough to exercise their control with wholesome discretion, the remedy is not to take it from them, but to inform their discretion by education. This is the true corrective of abuses of constitutional power.” --Letter to William Charles Jarvis (28 September 1820)