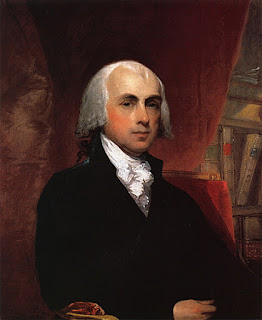 James Madison, Jr. was born on March 16, 1751 and died June 28, 1836. He was an American statesman, lawyer, diplomat, philosopher, and Founding Father who served as the fourth president of the United States from 1809 to 1817. Known as the "Father of the Constitution" he helped to shape the new American Republic. In retirement at Montpelier, his estate in Orange County, Virginia, Madison spoke out against the disruptive states' rights influences that by the 1830's threatened to shatter the Federal Union. In a note opened after his death in 1836, he stated, "The advice nearest to my heart and deepest in my convictions is that the Union of the States be cherished and perpetuated."

“The two great points of difference between a democracy and a republic are: first, the delegation of the government, in the latter, to a small number of citizens elected by the rest; secondly, the greater number of citizens, and greater sphere of country, over which the latter may be extended.” Federalist No. 10

“[W]e may define a republic to be…a government which derives all its powers directly or indirectly from the great body of the people, and is administered by persons holding their offices during pleasure, for a limited period, or during good behavior…” Federalist No. 39

Separation and Division of Power

“The accumulation of all powers, legislative, executive, and judiciary, in the same hands, whether of one, a few, or many, and whether hereditary, self appointed, or elective, may justly be pronounced the very definition of tyranny.” Federalist No. 47

“The compound Government of the United States is without a model, and to be explained by itself, not by similitudes or analogies.” Outline, September, 1829 (Madison, 1865, IV, page 18)

“The two vital characteristics of the political system of the United States are, first, that the Government holds its powers by a charter granted to it by the people; second, that the powers of government are formed in two grand divisions — one vested in a Government over the whole community, the other in a number of independent Governments over its component parts. Hitherto charters have been written grants of privileges by Governments to the people. Here they are written grants of power by the people to their Governments.” Supplement to the letter of November 27, 1830, to A. Stevenson (Madison, 1865, IV, pages 138-139)

“I have always supposed that the meaning of a law, and, for a like reason, of a constitution, so far as it depends on judicial interpretation, was to result from a course of particular decisions, and not those from a previous and abstract comment on the subject.” Letter to Judge Roan, September 2, 1819 (Madison, 1865, III, page 143)

“The ‘Federalist’ may fairly enough be regarded as the most authentic exposition of the text of the federal Constitution as understood by the Body [Constitutional Convention] which prepared & and the Authorities [state ratifying conventions] which accepted it.” Letter to Thomas Jefferson, February 8, 1825 (Peterson, 1974, 2. page 383)

“If Congress can do whatever in their discretion can be done by money, and will promote the General Welfare, the Government is no longer a limited one, possessing enumerated powers, but an indefinite one, subject to particular exceptions.” Letter to Edmund Pendleton, January 21, 1792 (Madison, 1865, I, page 546)

“I cannot undertake to lay my finger on that article of the Constitution which granted a right to Congress of expending, on objects of benevolence, the money of their constituents.” Statement before Congress, 4 Annals of Congress 179 (1794)

“The government of the United States is a definite government, confined to specified objects. It is not like the state governments, whose powers are more general. Charity is no part of the legislative duty of the government.” Speech, House of Representatives (January 10, 1794)

“As far as laws are necessary to mark with precision the duties of those who are to obey them, and to take from those who are to administer them a discretion which might be abused, their number is the price of liberty. As far as laws exceed this limit they are a nuisance; a nuisance of the most pestilent kind.” Notes on the Confederacy—April, 1787 Representation

“The aim of every political constitution is, or ought to be, first to obtain for rulers men who possess most wisdom to discern, and most virtue to pursue, the common good of the society; and in the next place, to take the most effectual precautions for keeping them virtuous whilst they continue to hold their public trust.” Federalist No. 57

“By a faction, I understand a number of citizens, whether amounting to a majority or a minority of the whole, who are united and actuated by some common impulse of passion, or of interest, adverse to the rights of other citizens, or to the permanent and aggregate interests of the community.” Federalist No. 10

“A Government like ours has so many safety-valves, giving vent to overheated passions, that it carries within itself a relief against the infirmities from which the best of human Institutions cannot be exempt.” Letter to General La Fayette, November 25, 1820 (Madison, 1865, III, pages 189-191)

“I believe there are more instances of the abridgment of the freedom of the people by gradual and silent encroachments of those in power, than by violent and sudden usurpations …” Speech at the Virginia Convention to ratify the Federal Constitution (June 6, 1788)

“[T]he advantage of being armed, which the Americans possess over the people of almost every other nation, the existence of subordinate governments, to which the people are attached, and by which the militia officers are appointed, forms a barrier against the enterprises of ambition, more insurmountable than any which a simple government of any form can admit of. Notwithstanding the military establishments in the several kingdoms of Europe, which are carried as far as the public resources will bear, the governments are afraid to trust the people with arms.” Federalist No. 46 Resistance “Extreme cases of oppression justify… a resort to the original right of resistance, a right belonging to every community, under every form of Government…” Letter to N. P. Trist, December, 1831 (Madison, 1865, IV, page 206)

Freedom of Speech and Press

“[T]he right of freely examining public characters and measures, and of free communication among the people thereon…has ever been justly deemed the only effectual guardian of every other right.” Virginia Resolutions, 1798

“[T]o the press alone; checkered as it is with abuses, the world is indebted for all the triumphs which have been gained by reason and humanity over error and oppression.” Madison's Report on the Virginia Resolutions (in the American Memory Collection of the Library of Congress)

“[W]e hold it for a fundamental and undeniable truth, "that religion or the duty which we owe to our Creator and the manner of discharging it, can be directed only by reason and conviction, not by force or violence." Memorial and Remonstrance, 1785

“Among the features peculiar to the political system of the United States, is the perfect equality of rights which it secures to every religious sect…Equal laws, protecting equal rights, are found, as they ought to be presumed, the best guarantee of loyalty and love of country; as well as best calculated to cherish that mutual respect and good will among citizens of every religious denomination which are necessary to social harmony, and most favorable to the advancement of truth.” Letter to Dr. De La Motta, August 1820 (Madison, 1865, III, pages 178-179)

“The belief in a God All Powerful wise and good, is so essential to the moral order of the world and to the happiness of man, that arguments which enforce it cannot be drawn from too many sources nor adapted with too much solicitude to the different characters and capacities to be impressed with it.” Letter to Rev. Frederick Beasley (November 20, 1825)

“A popular Government, without popular information, or the means of acquiring it, is but a prologue to a farce or a tragedy; or, perhaps, both. Knowledge will forever govern ignorance; and a people who mean to be their own governors must arm themselves with the power which knowledge gives.” Letter to W. T. Barry, August 4, 1822 (Madison, 1865, III, page 276 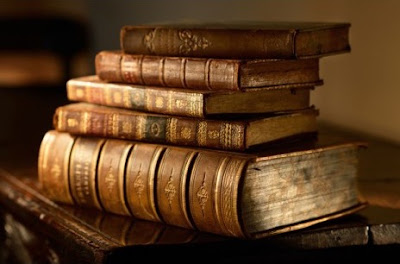 “Knowledge will forever govern ignorance: And a people who mean to be their own Governors, must arm themselves with the power which knowledge gives.” – James Madison to W. T. Barry, August 4, 1822.

One of the biggest threats to civility and progress is ignorance – but this is not the ignorance you may usually think of. In many ways we are a highly-educated society. Many of our generation excel in the knowledge of science, technology, engineering, math (STEM) and their applications in business and industry. However by comparison, the level of knowledge of fundamental principles of human equality, liberty, and divine rights under the Constitution and Bill of Rights, as well as of the history of the American Founding, is seriously lacking. Numerous studies have shown that the average student, as well as the average citizen, is totally unaware of the principles of government that guarantee our freedoms and of each individual’s responsibility to understand and uphold such freedoms. This ignorance is manifest in schools, universities, and in the media.

Some basic questions to test our knowledge:
One of Thomas Jefferson’s greatest concerns was that Americans become educated in a way “to enable every man to judge for himself what will secure or endanger his freedom.” (Letter to John Tyler, 1810). We are generally failing as a nation and as a society in this vital ingredient to maintain our constitutional republic. This fundamental ignorance seriously hampers our civility, our common discourse, and our progress as a nation. Even more significantly, it places in jeopardy our rights and our liberty.

“If a nation expects to be ignorant and free, in a state of civilization, it expects what never was and never will be.” – Thomas Jefferson to Charles Yancey, January 6, 1816.
Posted by J. David Gowdy at 2:45 PM No comments: