Was the American Revolution a Religious Rebellion? 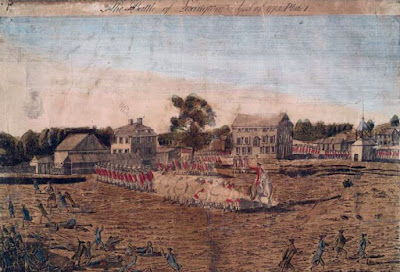 "The Battle of Lexington," at the Presbyterian Meetinghouse (1775)

“The colonies that in 1776 became the United States of America were settled by men and women of deep religious convictions who in the seventeenth century crossed the Atlantic Ocean to practice their faith freely. That the religious intensity of the original settlers would diminish to some extent over time was perhaps to be expected, but new waves of eighteenth century immigrants brought their own religious fervor across the Atlantic and the nation's first major religious revival in the middle of the eighteenth century injected new vigor into American religion. The result was that a religious people rose in rebellion against Great Britain in 1776, and that most American statesmen, when they began to form new governments at the state and national levels, shared the convictions of most of their constituents that religion was, to quote Alexis de Tocqueville's observation, 'indispensable to the maintenance of republican institutions.' ” (Library of Congress, Religion and the American Founding Exhibit).  Catholics, Jews, Dutch Calvinists, German Reformed pietists, Scottish Presbyterians, Baptists, Quakers, and other denominations joined Anglican or Congregational establishments in the American Colonies, and members of all faiths participated in the War for Independence. However, as described in the following article written by Richard Gardiner, “King George III and other highly placed Britons [also] called the colonists’ rebellion a ‘Presbyterian War.’”

“Though the events transpired almost a quarter of a millenium ago, the shelves down at the local Barnes & Noble bookstore routinely continue to display freshly researched, written, and published histories of the American Revolution, the founding fathers, and the genesis of the United States.[1] Yet there remains an element of the American founding era that is routinely underrepresented in these volumes—the role of religion. It is a factor of the Revolution that many historians minimize. The revolution, they maintain, was essentially secular in nature.

But “No understanding of the eighteenth century is possible” warned Carl Bridenbaugh, “if we unconsciously omit, or consciously jam out, the religious theme just because our own milieu is secular.”[2] Yet, as Kevin Phillips remarked, “Historians and commentators in the late twentieth-century United States have shrunk from emphasizing religion in their explanations of seventeenth and eighteenth century affairs.”[3] Phillips argued that this is a gross error insofar as “any serious investigation of the patterns of rebellion and loyalty during the 1775-1783 fighting in the United States leads to religion.”[4]

No one recognized this better than the foes of the American revolutionaries. Ambrose Serle, secretary to British General Howe in New York City, wrote to the British Secretary of State in 1776 telling him that the American Revolution was ultimately a religious war.[5] Serle’s insights are perhaps worthy of special consideration given his privileged vantage point. In light of his intelligence, education, broad perspective, and eyewitness status, Serle’s observations compel historians to incorporate his perspective into a comprehensive understanding of the conflict. Serle’s biographer, Edward Tatum, Jr., who wrote the introduction to Serle’s Diary put it in these terms:

“Serle was no ordinary observer but one whose training and philosophy gave point to his opinions and coherence to his judgments. In addition, his unique position as a civilian in intimate association with Lord Howe afforded him an unusual opportunity to see more than one aspect of a complicated situation.”[6]

Given Serle’s erudition, his observations cannot be summarily dismissed. Serle argued for a deeper understanding of the dynamics of the revolution beneath the secular facade. He boldly asserted that the revolution could not be sustained in America if it were not for the Presbyterian ministers who bred it.[7] He lamented the fact that almost every minister in America doubled as a politician. Most significantly, he echoed a chant by loyalists throughout America, namely, that at the bottom of the conflict was the Presbyterians’ desire to gain “the Establishment of their own Party.”[8] In other words, he claimed that the war was fueled by the Presbyterians’ desire to establish their religion as the official church of the new American government.

The same assessment may be made of Charles Inglis’ perspective. He had a front row seat to the entire revolution. He, too, was highly educated and erudite. He had close contacts with a large number of loyalists in the know. If anyone was a principal mouthpiece for the opinions of loyalists, Inglis was. And what did he say? “It is absolutely certain, that on the part of many, the present is a Religious War.”[9] Another such Tory during the war stated, “the American controversy is closely connected with Christianity in general, and with Protestantism in particular; and that, of consequence, it is of religious as well as of a civil nature.”[10]

The important fact that King George III and his deputies on both sides of the Atlantic alleged that the colonial rebellion was a religious endeavor is no longer widely publicized. A number of scholars have casually mentioned this phenomenon in passing. Kevin Phillips, in his 1998 study of the American Revolution, twice noted: “King George III and other highly placed Britons called the colonists’ rebellion a ‘Presbyterian War.’”[11] Historians of yesteryear were a bit more attentive to this feature. According to William H. Nelson, the belief that most of the American revolutionaries were “congregational or presbyterian republicans,” or at least of Calvinistic temperament “was held by almost all the Tories whose opinions survive.”[12] According to the celebrated British historian of the American Revolution, George Trevelyan, in the early days of the revolution, loyalists alleged that “political agitation against the Royal Government had been deliberately planned by Presbyterians… it was fostered and abetted by Presbyterians in every colony.”[13] John C. Miller observed, “To the end, the Churchmen believed that the Revolution was a Presbyterian-Congregationalist plot.”[14] These references notwithstanding, historians no longer give much attention to this “Presbyterian plot” interpretation of the revolution. In light of the abundance of evidence, such is an irresponsible oversight.

A Hessian captain, fighting on behalf of the British, told a friend in Germany in 1778, “call this war, dearest friend, by whatsoever name you may, only call it not an American Revolution, it is nothing more nor less than an Irish-Scotch Presbyterian Rebellion.”[15] Andrew Hammond, British commander of the HMS Roebuck, arrived in America just after the Declaration of Independence had been signed by the members of the Continental Congress. At that juncture, Hammond conveyed the perspective of the Anglicans, “[I]t is the Presbyterians that have brought about this revolt, and aim at getting the government of America into their hands.”[16] Isaac Atkinson, a Maryland loyalist, expressed his opinion of the revolution, that “it was a religious dispute and a Presbyterian scheme.”[17] Thomas Smith, a supporter of the crown in Pennsylvania he held the view “that the whole was nothing but a scheme of a parcel of hot-headed Presbyterians.”[18]

King George III was advised by William Jones in 1776, “this has been a Presbyterian war from the beginning… and accordingly the first firing against the King’s troops  was from a Massachuset [sic] meeting house.”[19] Did the king agree with Jones? The evidence is overwhelming that he did.

From the beginning of the conflict, George III was convinced that the leading New England rebels were Presbyterians. This is proven by a remark he made to Massachusetts governor Thomas Hutchinson in 1774. When discussing the nature of the American dissident leadership with his representative from Massachusetts, the king exclaimed, “are they not Presbyterians?”[20] The king had every reason to suspect so. A letter published in a London newspaper only a month earlier came from a royalist in New York:

“Believe me, the Presbyterians have been the chief and principal instruments in all these flaming measures, and they always do and ever will act against Government, from that restless and turbulent anti-monarchical spirit which has always distinguished them every where.”[21]

The king maintained this sentiment throughout the war. In 1779 Benjamin Franklin, a rather reliable source of diplomatic intelligence, stated that George III hated the American Revolutionaries because the king perceived that they were “whigs and Presbyterians.”[22]

Royal sentiments in this regard permeate the documentary record. Jones was not the only source who communicated this opinion to the king. We know that the British Secretary of State, Lord Dartmouth, who certainly had the king’s ear, was also urged by an intelligence agent in America to understand that “Presbyterianism is at the bottom” of the war.[23] The provisional governor of Rhode Island, Nicholas Cooke, was told that the revolution was a Presbyterian war, and the royal governor of Rhode Island believed it.[24]

Were these Tories who considered the revolution a religious plot entirely sober in these reflections? Clearly not. They, too, were participants, embroiled in the fanaticism of the conflict. Their tendency to suspect that a Presbyterian minister was hiding behind every tree, secretly orchestrating the revolution from beginning to end, is Macarthyesque indeed. But the other extreme to which historians have gone is just as spurious. Religious and denominational dynamics were vitally central to the revolt. Historians have failed to state this as clearly as it deserves. The allegation that the American Revolution was a Presbyterian Rebellion is an important one to understand if we are to have a truly comprehensive understanding of what happened and why.

In short, the American Revolution did have a “holy war” dynamic to it that pitted Anglicans against dissenters (who were generally referred to as Presbyterians), and in the minds of the loyalists, the war was fundamentally, at bottom, a Presbyterian rebellion. It is, without question, an accurate assessment of how King George III and his advocates perceived the American war. Whether that perception was entirely accurate may be another question, but the very fact that it was how they viewed it is an important dynamic that should not be overlooked as we chronicle America’s nativity narrative.”