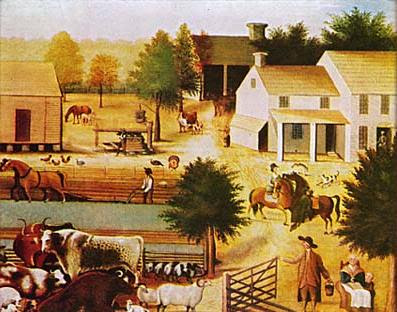 Thomas Jefferson considered himself a farmer by profession.  He was continually searching for more progressive ways to work his plantations at Monticello. Jefferson diligently recorded notes about the varieties of vegetables and fruits he experimented with and planted, sowing locations, harvest dates, and weather conditions.  He was always interested in new seed varieties, and soil conservation was a particular passion. Jefferson was zealous about the need for farmers to share innovative ideas, improved crops, and new machinery. He invented a more efficient plow but never patented his design so that other farmers could freely benefit from the idea.

John Adams’ father was a modest but successful farmer.  When John was young his parents began to worry that he was wasting his gifted intellect. His father asked him at age ten, "What would you do, child?" John answered back, "Be a farmer." The next day John's father took the boy to fields and worked him as hard as any adult. The night after young John came back tired, sore, and covered in dirt, his father asked John, "Well, John, are you satisfied with being a farmer?" His father, hoping he had taught his son a valuable lesson, was surprised by the answer. "I like it very well, Sir."  Although he eventually went on to become a lawyer, John and his wife Abigail cultivated 40 acres of cropland and orchards at their own home and farm, Peacefield, near Boston.

George Washington grew wheat and corn at Mount Vernon, but struggled with the region’s thin topsoil.  He undertook crop rotation and also engaged in numerous experiments to find the best form of fertilizer. He subscribed to a publication titled The Practical Farmer, which advocated the wise use of agricultural by-products and adding organic matter to improve the soil.  After many trials with composting, Washington applied manure, river and creek mud, fish heads, and plaster of paris to his fields with some success.  His devotion to implementing the agricultural innovations of his day was more than just the natural desire of a farmer to improve his yields. He was acutely aware of the need for the new American nation to establish itself in the world, and farming was the first occupation of the country. His commitment to agriculture was expressed in a letter from April 1788:

"Every improvement in husbandry should be gratefully received and peculiarly fostered in this Country, not only as promoting the interest and lessening the labor of the farmer, but as advancing our respectability in a national point of view; for, in the present state of America, our welfare and prosperity depend upon the cultivation of our lands and turning the produce of them to the best advantage."

The Equality of Women in America in 1838 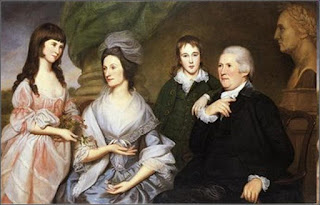 Alexis de Tocqueville was an aristocratic Frenchman who came to the U.S. in 1831 (at age 25) and later wrote Democracy in America, a two-volume study of the American people and their political institutions.  In Chapter 12 he wrote his observations concerning American women:

“…in Europe …women [are] nevertheless deprived of some of the greatest attributes of the human species and considered as seductive but imperfect beings.”
“Americans …conduct to women always implies that they suppose them to be virtuous and refined; and such is the respect entertained for the moral freedom of the sex that in the presence of a woman the most guarded language is used lest her ear should be offended by an expression.”
“…the Americans can conceive nothing more precious than a woman's honor and nothing which ought so much to be respected as her independence, they hold that no punishment is too severe for the man who deprives her of them against her will.”
“Thus the Americans do not think that man and woman have either the duty or the right to perform the same offices, but they show an equal regard for both their respective parts; and though their lot is different, they consider both of them as beings of equal value.”
“…while they have allowed the social inferiority of woman to continue, they have done all they could to raise her morally and intellectually to the level of man; and in this respect they appear to me to have excellently understood the true principle of democratic improvement …I have nowhere seen woman occupying a loftier position…”
___________________________ 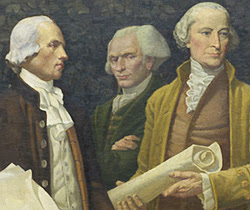