The First Inauguration of George Washington 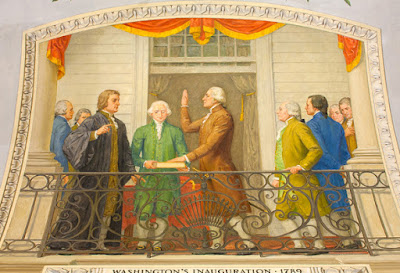 On April 30, 1789, George Washington was sworn in as the first President of the United States of America.  “Since nearly first light that morning, a crowd of people had begun to gather around Washington's home, and at noon they made their way to Federal Hall by way of Queen Street and Great Dock (both now Pearl Street) and Broad Street in New York. Washington dressed in an American-made dark brown suit, with white silk stockings and silver shoe buckles; he also wore a steel-hilted sword and dark red overcoat.”[1]

“As the first of every thing, in our situation will serve to establish a Precedent,” he wrote James Madison, “it is devoutly wished on my part, that these precedents may be fixed on true principles.”[2]   Standing on the balcony of Federal Hall, George Washington took his Constitutional oath of office as the first President of the United States.  The Constitution proscribes the following Presidential oath:

Washington took this oath with his right hand resting on the Bible, which had been opened to Genesis, chapter 49 (Jacob’s blessings upon his twelve sons -- the heads of the Twelve Tribes of Israel).  With his head bowed in a reverential manner, Washington added in a clear and distinct voice, "I swear, so help me God!" then bowing over the Bible, he reverently kissed it. Whereupon, Chancellor of New York, Robert Livingston (who administered the oath), exclaimed in a ringing voice, "Long live George Wash­ington, President of the United States!" -- which was replied to with loud cheers from the crowd, followed by a 13-gun salute.

The first inaugural address was subsequently delivered by Washington in the Senate chamber (to read the text of his address, please see: http://www.liberty1.org/inaug.htm). At this time there were no inaugural balls on the day of the ceremony, though a week later, on May 7th, a ball was held in New York City to honor the first President. “Washington arrived at the ball in the company of other American statesmen and their wives. That evening he danced with many of New York’s society ladies. Vice President John Adams, members of Congress and visiting French and Spanish dignitaries, as well their wives and daughters, joined in the festivities. Eliza Hamilton, wife of Alexander Hamilton, recorded her impressions of the ball in her memoirs, noting that the president liked to dance the minuet, a dance she thought was suited to his dignity and gravity.”[3]

To preserve the memory of the first Presidential Inauguration, a page was inserted in the Bible used by Washington, with the date and an inscription that included this poetic verse (the Bible used in the ceremony was from the Masonic St. John's Lodge No. 1, A.Y.M.)[4]:

Fame stretched her wings and with her trumpet blew.
Great Washington is near. What praise is due?
What title shall he have? She paused, and said
‘Not one - his name alone strikes every title dead.


[1] https://en.wikipedia.org/wiki/First_inauguration_of_George_Washington
[2] W. Abbott, ed., The Papers of George Washington (University of Virginia Press, Charlottesville, 1987), 2:216-17.
[3] http://www.history.com/this-day-in-history/george-washington-attends-inaugural-ball
[4] “George Washington joined the Masonic Lodge in Fredericksburg, Virginia, at the age of twenty in 1752. During the War for Independence, General Washington attended Masonic celebrations and religious observances in several states. He also supported Masonic lodges that formed within army regiments.” See https://gwmemorial.org/pages/george-washington-the-mason.
[5] See: http://www.stjohns1.org/portal/gwib
Posted by J. David Gowdy at 3:37 AM No comments: