The Character of George Washington 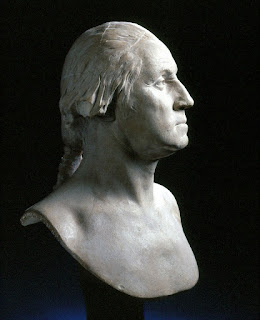 George Washington began at an early age to work to improve his character.  At age 16 he copied out by hand “The Rules of Civility and Decent Behavior in Company and in Conversation.”  These rules of civility, totaling 110, are based upon a set composed by French Jesuits in 1595.  Upon review, they may seem outdated and even silly (particularly in our modern Hollywood and Facebook culture, where it sometimes seems that civility and decent behavior are all a thing of the past), but at their core they have to do with good manners, modesty, morality, and respect for others.

Here are a few:
6th – “Sleep not when others speak…”
7th – “Put not off your clothes in the presence of others, nor go out your chamber half dress’d.”
9th – “Spit not in the fire…”
15th – “Keep your nails clean and short, also your hands and teeth clean yet without showing any great concern for them.

Now some more serious ones:
22nd – “Show not yourself glad at the misfortune of another though he were your enemy.”
40th – “Strive not with your superiors in argument, but always submit your judgment to others with modesty.”
48th – “Wherein you reprove another be unblameable yourself; for example is more prevalent than precepts.”
82nd – “Undertake not what you cannot perform but be careful to keep your promise.”
89th – “Speak not evil of the absent for it is unjust.”

And finally,
108th – “When you speak of God or his attributes, let it be seriously & with reverence. Honor & obey your natural parents although they be poor.”
109th – “Let your recreations be manful not sinful.”
110th – “Labor to keep alive in your breast that little spark of celestial fire called conscience.”

Of course, we cannot assume that just because young George wrote down these rules (most likely for a schoolmaster), that he followed all of them.  But as so many have studied and reviewed his life’s conduct in private as well as in public, it appears that he took this academic exercise most seriously to heart.  Parson Weems got this right in his biography of Washington, when he wrote that it was “no wonder every body honoured him who honoured everybody.” [1]

In his moral biography of Washington, Richard Brookhiser asserts that Washington was obsessed with what today we would call his reputation or public image but was then known in the 18th century as ''character.'' From his youth, he sought dignified fame and military glory. He achieved both. But he did so, just as we must do, by learning from his mistakes and through diligence and great self-discipline.

In this vein, as one commentator has written, “Underneath everything lay Washington's desire for a good reputation. Some acts were simply dishonorable, some bad manners, and others merely stupid. A gentleman who wanted respect avoided all three as best he could. The preventives were called honesty and courage, courtesy and civility, and the combination of reading, intelligent observation, and fore-thought. One avoided thoughtless words and promises by saying little, drinking less, and by an unwavering politeness to friends and enemies alike. This was not easy for Washington, for he was a sensitive man who possessed a fiery temper and he had an exquisite vocabulary of unprintable words which could be effectively employed on the proper occasions. All the more reason for his exercising his famous self-control.”[2]

Washington’s character as a young military officer was tested in the French and Indian War.  As Brookhiser writes, this war was “the final struggle between Britain and France for control of the Continent, and Washington took part in some of its most dramatic moments; indeed, he had fired the first shots in it.  …Before the war began, Washington, a major in the militia with training as a surveyor, made a 300-mile trip into the Pennsylvania wilderness to scout out French intentions, keeping a journal...  He was only 21 years old.  [A year later] he went back into the woods at the head of a small force [as a British officer] where he attacked a party of French.  “I heard the bullet’s whistle,” he wrote a younger brother, “and, believe me, there is something charming in the sound…”

Washington …[had] expected to drive the French to Montreal; instead, they surrounded him and forced him to surrender.  Britain’s agent for Indian affairs felt the young officer had been “too ambitious of acquiring all the honour,” and hence overly impetuous.”  [Some even felt he was responsible for the war that proceeded from that initial conflict]. But, the colonial consensus was that Washington had been outnumbered by enemies who had been up to no good.”

“[Later] In 1755, Washington witnessed a far greater defeat, when an army led by British General Edward Braddock was cut to pieces outside Fort Duquesne, now Pittsburgh.  Washington, who was serving as Braddock’s aide, had two horses shot out from under him, led a remnant of men to safety, and buried his slain commander. …Washington spent three more years commanding the Virginia militia on the frontier, angling for a better assignment and seeking to maintain the discipline of his troops.”[3]

So, it seems on the one hand that during the French and Indian Washington failed to observe the very rules of civility that had assisted him in his social and military rise.  On author writes, "There is something unlikable about the George Washington of [this period]. He seems a trifle raw …too ready to complain, too nakedly concerned with promotion."[4]  But on the other hand, Washington grew in stature because he faced his failures, and in turn recognized and persisted in overcoming his own errors. And, there was no question that he was exceedingly brave in the face of danger and incredibly tough in battle.

Through time, occupied by diligent study, self-reflection and self-discipline Washington managed to bridle his temper and his ambition for personal fame and to place the interests of his countrymen above self.

Also important to remember, is his courtship and marriage to Martha Dandridge Custis.  She was not only a beautiful, but a very wealthy widow of Virginia.  Martha fell in love and George found her quite attractive. (That she had a good disposition and inherited wealth were an added bonus to the relationship). He had had a crush on a pretty neighbor, Sally Fairfax, but when she married another, he knew he must find a suitable wife for himself.

Martha married George on January 6, 1759. The marriage changed George from being a comfortably well-off, country gentleman-soldier to becoming one of Virginia’s wealthiest landowners. He had resigned his commission in the militia and so, George, Martha, and her two children, Jacky (age 4), and Patsy (age 2), moved into the enlarged and remodeled Mt. Vernon. Her influence on Washington was lasting.

The next decade thrust Washington into the events that led to America’s war for Independence. His civility and modesty was exhibited when he accepted his commission as Commander in Chief of the Continental Army in 1775.  He told Congress that if “some unlucky event should happen unfavorable to my reputation, I beg it be remembered by every gentlemen in the room, that this day I declare…that I do not think myself equal to the command I am honored with.”[5]

During the Revolutionary War, and after, Washington grew in stature and wisdom. The ultimate growth and development of his character is probably best described by Thomas Jefferson, who wrote the following in a letter fourteen years after Washington’s death:

“I think I knew General Washington intimately and thoroughly; and were I called on to delineate his character, it should be in terms like these.

His mind was great and powerful… and as far as he saw, no judgment was ever sounder. …He was incapable of fear, meeting personal dangers with the calmest unconcern. Perhaps the strongest feature in his character was prudence, never acting until every circumstance, every consideration, was maturely weighed; refraining if he saw a doubt, but, when once decided, going through with his purpose, whatever obstacles opposed.

His integrity was most pure, his justice the most inflexible I have ever known. …He was, indeed, in every sense of the words, a wise, a good, and a great man. …His person, you know, was fine, his stature exactly what one would wish, his deportment easy, erect and noble; the best horseman of his age, and the most graceful figure that could be seen on horseback….

On the whole, his character was, in its mass, perfect, in nothing bad, in few points Indifferent; and it may truly be said, that never did nature and fortune combine more perfectly to make a man great…

For his was the singular destiny and merit, of leading the armies of his country successfully through an arduous war, for the establishment of its independence; of conducting its councils through the birth of a [new] government… and of scrupulously obeying the laws through the whole of his career, civil and military, of which the history of the world furnishes no other example. . . .

We knew his honesty …

I felt on his death, with my countrymen, that ‘verily a great man hath fallen this day in Israel.’”[6]