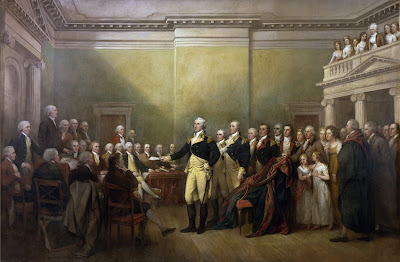 "General Washington was nearly fifty-two when he decided to retire from military life and return to his Mount Vernon plantation.  He said good-bye to his officers (in the Long Room at Fraunces' Tavern in New York City), told the Army farewell in Rocky Hill (near Princeton, New Jersey) and bid Congress adieu (in the Old Senate Chamber at the Annapolis State House).

When he gave his farewell address to Congress, he returned his commander-in-chief commission which he’d received in 1775.  It was a powerfully symbolic gesture that the new country would be governed by civilians, not generals.  The speech was so personally significant, he had to still the shaking document by holding it with both hands.  Washington knew the importance of his actions, and his words were so sincere the crowd wept.

When the event was over, he gave the original speech to a friend and sped away from the Annapolis State House on horseback.  Later, John Trumbull (who was present when the British surrendered at Yorktown) memorialized the scene in a famous painting." (https://www.awesomestories.com/asset/view/Washington-s-Farewell-A-Great-Leader-Gives-Up-Power).  The text of his address follows:

“The great object, for which I had the honor to hold an appointment in the service of my country, being accomplished, I am now preparing to resign it into the hands of Congress, and to return to that domestic retirement, which, it is well known, I left with the greatest reluctance; a retirement for which I have never ceased to sigh, through a long and painful absence, and in which (remote from the noise and trouble of the world) I meditate to pass the remainder of life, in a state of undisturbed repose. But before I carry this resolution into effect, I think it a duty incumbent on me to make this my last official communication; to congratulate you on the glorious events which Heaven has been pleased to produce in our favor; to offer my sentiments respecting some important subjects, which appear to me to be intimately connected with the tranquillity of the United States; to take my leave of your Excellency as a public character; and to give my final blessing to that country, in whose service I have spent the prime of my life, for whose sake I have consumed so many anxious days and watchful nights, and whose happiness, being extremely dear to me, will always constitute no inconsiderable part of my own…

The citizens of America, placed in the most enviable condition, as the sole lords and proprietors of a vast tract of continent, comprehending all the various soils and climates of the world, and abounding with all the necessaries and conveniences of life, are now, by the late satisfactory pacification, acknowledged to be possessed of absolute freedom and independency. They are, from this period, to be considered as the actors on a most conspicuous theatre, which seems to be peculiarly designated by Providence for the display of human greatness and felicity. Here they are not only surrounded with every thing, which can contribute to the completion of private and domestic enjoyment; but Heaven has crowned all its other blessings, by giving a fairer opportunity for political happiness, than any other nation has ever been favored with.
Nothing can illustrate these observations more forcibly, than as recollection of the happy conjuncture of times and circumstances, under which our republic assumed its rank among the nations. The foundation of our empire was not laid in the gloomy age of ignorance and superstition; but at an epocha when the rights of mankind were better understood and more clearly defined, than at any former period. The researches of the human mind after social happiness have been carried to a great extent; the treasures of knowledge, acquired by the labors of philosophers, sages, and legislators, through a long succession of years, are laid open for our use, and their collected wisdom may be happily applied in the establishment of our forms of government. The free cultivation of letters, the unbounded extension of growing liberality of sentiment, and above all, the pure and benign light of Revelation, have had a meliorating influence on mankind and increased the blessings of society. At this auspicious period, the United States came into existence as a nation; and, if their citizens should not be completely free and happy, the fault will be entirely their own.

Such is our situation, and such are our prospects; but, notwithstanding the cup of blesses thus reached out to us; notwithstanding happiness is ours, if we have a disposition to seize the occasion and make it our own; yet it appears to me there is an option still left to the United States of America, that it is in their choice, and depends upon their conduct, whether they will be respectable and prosperous, or contemptible and miserable, as a nation. This is the time of their political probation; this is the moment when the eyes of the whole world are turned upon them; this is the moment to establish or ruin their national character for ever; this is the favorable moment to give such a tone to our federal government, as will enable it to answer the needs of its institution, or this may be the ill-fated moment for relaxing the powers of the Union, annihilating the cement of the confederation, and exposing us to become the sport of European politics,which may play one State against another, to prevent their growing importance, and to serve their own interested purposes. For, according to the system of policy the States shall adopt at this moment, they will stand or fall; and by their confirmation or lapse it is yet to be decided, whether the revolution must ultimately be considered as a blessing or a curse; a blessing or a curse, not to the present age alone, for with our fate will the destiny of unborn millions be involved.”
-- George Washington (December 4, 1783).