Derived from his First Inaugural Address, April 30, 1789, and from his Farewell Address, September 17, 1796, George Washington understood, lived, and taught these great maxims or principles of liberty:

I. Liberty is of Divine Origin "No people can be bound to acknowledge and adore the invisible hand, which conducts in the affairs of men more than the people of the United States. -- Every step, by which they have been advanced to the character of an independent nation, seems to have been distinguished by some token of providential agency." (First Inaugural Address)

II. Liberty has a Price "The independence and liberty you possess are the work of . . . joint efforts, of common dangers, suffering and successes." (Farewell Address)

III. Liberty is secured by Government "Liberty itself will find in such a government, with powers properly distributed and adjusted, its surest guardian." (Farewell Address)

IV. Liberty requires Unity "[Y]our union ought to be considered as a main prop of your liberty, and that the love of the one ought to endear to you the preservation of the other." (Farewell Address)

V. Liberty is maintained by Obedience to Law "Respect for [this Government's] authority, compliance with its laws, acquiescence in its measures, are duties enjoined by the fundamental maxims of true liberty." (Farewell Address)

VI. Liberty is dependent upon Virtue "[V]irtue or morality is a necessary spring of popular government." (Farewell Address)

"Of all the dispositions and habits which lead to political prosperity, religion and morality are indispensable supports. In vain would that man claim tribute to patriotism who should labor to subvert these great pillars of human happiness." (Farewell Address)

VII. Liberty affords the path to Happiness "[T]here is no truth more thoroughly established, than that there exists . . . an indissoluble union between virtue and happiness." (First Inaugural Address)

"Can it be that Providence has not connected the permanent felicity of a nation with its virtue?" (Farewell Address)
Posted by J. David Gowdy at 12:12 PM No comments:

James Madison's "Advice to My Country" 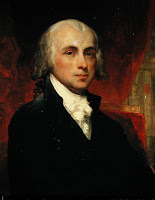 "As this advice, if it ever see the light, will not do it till I am no more, it may be considered as issuing from the tomb, where truth alone can be respected, and the happiness of man alone consulted. It will be entitled therefore to whatever weight can be derived from good intentions, and from the experience of one who has served his country in various stations through a period of forty years; who espoused in his youth, and adhered through his life, to the cause of its liberty; and who has borne a part in most of the great transactions which will constitute epochs of its destiny."

"The advice nearest to my heart and deepest in my convictions is, "That the Union of the States be cherished and perpetuated. Let the open enemy to it be regarded as a Pandora with her box opened, and the disguised one as the Serpent creeping with his deadly wiles into Paradise."
_______________________