Recollections of Joan of Arc 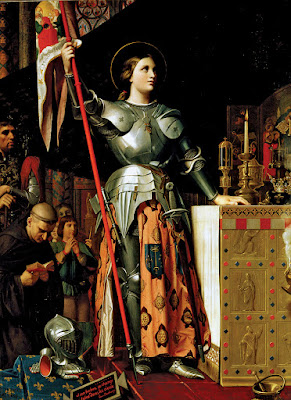 “A young boy approached Mark Twain one day, after spotting the famous author standing alone on a stone bridge in Redding, Connecticut. Twain was a familiar presence in the community, and the boy had awaited such a chance to express his admiration. “I was glad that he was alone,” Coley Taylor recalled years later in an article in American Heritage. “I had wanted to tell him how much I had enjoyed Tom Sawyer and Huckleberry Finn.” But Twain’s response to the young boy’s praise was shocking. “I had never seen him so cross. I can see him yet, shaking that long forefinger at me,” Taylor recalled. “You shouldn’t read those books about bad boys!” the author scolded. “Now listen to what an old man tells you. My best book is my Recollections of Joan of Arc. You are too young to understand and enjoy it now, but read it when you are older. Remember then what I tell you now. Joan of Arc is my very best book.”[1]
________________________________
“Joan of Arc, a peasant girl living in medieval France, believed that God had chosen her to lead France to victory in its long-running war with England. With no military training, Joan convinced the embattled crown prince Charles of Valois to allow her to lead a French army to the besieged city of Orléans, where it achieved a momentous victory over the English and their French allies, the Burgundians. After fulfilling her mission and seeing the prince crowned King Charles VII, Joan was captured by Anglo-Burgundian forces, tried for witchcraft and heresy and burned at the stake in 1431, at the age of 19.
Although we know her as Joan of Arc, or Jeanne d'Arc in French, she called herself Jehanne la Pucelle, or Joan the Maid. She is also known as the "Maid of Orléans." Pucelle means “maid” and also signifies that she was a virgin, an important distinction given that her society held female virginity before marriage in high regard.”[2]
Her military career lasted from between April 1429, when she left with troops to help raise the siege of Orléans, and May 1430 when she was captured by English troops loyal to John of Luxembourg. To Joan and her supporters, her mission of driving the English out of France and crowning Charles was one that was called upon her by God. “I am sent here in God’s name, the King of Heaven, to drive you body for body out of all France...” she said in a challenge written down and sent to the English before she went into battle at Orléans.
________________________________
Twain wrote: “[Joan's] history has still another feature which sets her apart and leaves her without fellow or competitor: there have been many uninspired prophets, but she was the only one who ever ventured the daring detail of naming, along with a foretold event, the event's precise nature, the special time-limit within which it would occur, and the place and scored fulfillment.
At Vaucouleurs she said she must go to the King and be made his general, and break the English power, and crown her sovereign - "at Rheims." It all happened. It was all to happen "next year" - and it did.
She foretold her first wound and its character and date a month in advance, and the prophecy was recorded in a public record-book three weeks in advance. She repeated it the morning of the date named, and it was fulfilled before night.
At Tours she foretold the limit of her military career - saying it would end in one year from the time of its utterance - and she was right.
She foretold her martyrdom - using that word, and naming a time three months away - and again she was right.
At a time when France seemed hopelessly and permanently in the hands of the English she twice asserted in her prison before her judges that within seven years the English would meet with a mightier disaster than had been the fall of Orleans: it happened within five - the fall of Paris.
Other prophecies of hers came true, both as to the event named and within the time limit prescribed.
Taking into account, as I have suggested before, all the circumstances - her origin, youth, sex, illiteracy, early environment, and the obstructing conditions under which she exploited her high gifts and made her conquests in the field and before the courts that tried her for her life, she is easily and by far the most extraordinary person the human race has ever produced…
Love, Mercy, Charity, Fortitude, War, Peace, Poetry, Music--these may be symbolized as any shall prefer: by figures of either sex and of any age; but a slender girl in her first young bloom, with the martyr's crown upon her head, and in her hand the sword that severed her country's bonds--shall not this, and no other, stand for PATRIOTISM through all the ages until time shall end?”[3]
______________________
[1] Ted Gioia, “How Joan of Arc Conquered Mark Twain” https://www.americamagazine.org/arts-culture/2018/04/12/how-joan-arc-conquered-mark-twain)
[2] https://www.history.com/topics/middle-ages/saint-joan-of-arc
[3] Mark Twain, “Personal Recollections of Joan of Arc” (Harper & Brothers, New York, 1919)
Posted by J. David Gowdy at 12:33 PM

David - thank you for the article.

This made me realize how "there is an opposition in all things." AS I read how Joan of Arc felt inspired to lead France against England I thought of many other great feats throughout history.

Greatness is birthed under conditions of tremendous trial and resistance.

Right now America feels to be in a moment of trial and resistance regardless of the political aisle from which one stands. It's as if we have a need to create our own internal "King George" regardless of whether he exists or not. He always seems to manifest himself somewhere, whether it be in our enemies, our acquaintances, friends, family or even our own selves.

Hopefully we can all unite around a single cause of good vs evil someday. Those stories of Jesus coming one day and ushering 1,000 years of peace sounds remarkable.