The Federalist and Human Nature 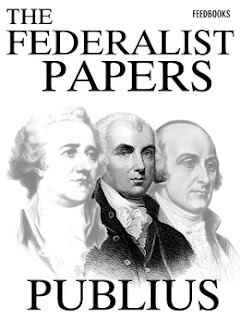 The second installment of my series of essays on The Federalist will examine the understanding of human nature presented by Publius.  This topic is profoundly important because Publius’ view of the basic nature of man logically shaped the kind of government they were advocating.

Across the ages, examining the basic presuppositions of political philosophers about the nature of man reveals what forms of government followed from those premises.  For example, Aristotle believed that man can form habits of vice or habits of virtue.   Therefore, a rule by a single leader could assume the best form of government in a just monarchy or it can be worst form of government under a corrupt tyrant.  Jean-Jacques Rousseau believed that man was good and perfectible in his nature and corrupted only by institutions.  As a result, a unicameral legislature with no checks and balances was a logical form of government.  Finally, Thomas Hobbes posited that man was by nature evil and that life in a state of nature without law would be nasty, brutish, and short in the war of all against all.  Therefore, he advocated an unlimited sovereign, Leviathan, whose job was to enforce law and order.

Thus, the view of human nature as presented in The Federalist is a crucial question for understanding the Constitution.  It should hardly surprise us that in an overwhelming Protestant nation of various denominations, Publius formed a generally pessimistic view of human nature based upon Original Sin.  Indeed, in Federalist #51, James Madison uses religious language to explore the basic nature of man.  Madison averred:

The implicit conclusions Madison draws from his conditional (if-then) logical statements are plain.  Men are not angels, and therefore government is in fact necessary.  Moreover, men are not always governable by angels or God.  The people follow their passions and leaders suffer from ambition for power.  Thus, internal and external controls on government are necessary because men are governed by men.

Madison continues, explaining how to frame a republican government, considering his argument regarding human nature:

In framing government which is to be administered by men over men, the great difficulty lies in this: you must first enable the government to control the governed; and in the next place oblige it to control itself.[2]

The writers of the Federalist were also steeped in classical philosophy and believed that man was mired by passions, self-interest, and habits of vice but also capable of self-control, reason, and habits of virtue.  They believed, with Aristotle, that each person had an ethical duty and the reason to govern himself and restrain his vices to live a happy and free life.  So too could a people govern itself justly and virtuously in a republic.

This influence is evident in Madison’s Federalist #55, where he even uses a classical allusion to illustrate his point about human nature:

In all numerous assemblies, of whatever characters composed, passion never fails to wrest the scepter from reason.  Had every Athenian citizen been a Socrates, every Athenian assembly would still have been a mob.[3]

At the end of the same essay, Madison further discussed the subject.  He noted the heights and depths to which humanity could rise and sink.  The existence of republican self-government posited the better angels in our nature, but since humans were still subject to their passions, checks on human nature were still necessary.  He wrote:

As there is a degree of depravity in mankind which requires a certain degree of circumspection and distrust, so there are other qualities in human nature which justify a certain portion of esteem and confidence.  Republican government presupposes the existence of these qualities in a higher degree than any other form.[4]

Has it not, on the contrary, invariably been found that momentary passions, and immediate interests, have a more active and imperious control over human conduct than general  or remote considerations of policy, utility, or justice? . . . .

Is it not time to awake from the deceitful dream of a golden age and to adopt as a practical maxim for the direction of our political conduct that we, as well as the other inhabitants of the globe, are yet remote from the happy empire of perfect wisdom and perfect virtue?[5]
Madison and Hamilton had great hope that Americans, and thereby humans, were capable of governing themselves by their own consent.  They believed that republican ideals of virtue and self-government as well as institutional checks and balances would provide the means for Americans to govern themselves and enjoy their natural rights and liberties.

Not every Founding Father agreed.  Founders such as Thomas Paine, Benjamin Franklin, and Thomas Jefferson often took a more liberal view of human nature.  Paine and Franklin supported unicameral legislatures because they did not believe that human nature needed many checks.  Such ideas were considered at the Constitutional Convention and rejected.  Jefferson, for his part, was in Paris, and more favorably disposed towards the ideals of the radical French Enlightenment and the French Revolution, which believed in the basic goodness of man and the evil of institutions.

But, the writers of the Federalist was more realistic as were the Framers of the Constitution.  The next essay in this series will explore the institutional checks and restraints upon the government given their understanding of human nature as flawed but capable of aspiring toward higher ideals.
(Next - 3rd installment in series - "The Federalist, Human Nature, and Forms of Government": http://wjmi.blogspot.com/2015/02/the-federalist-human-nature-and-forms.html)