The Origins of The Federalist 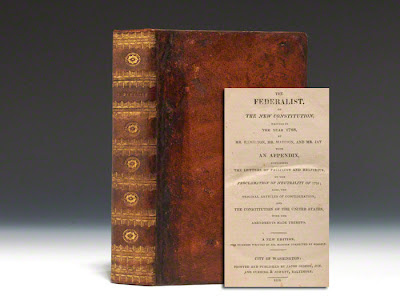 On September 17, 1787, at the conclusion of the Constitutional Convention in the Philadelphia statehouse, Benjamin Franklin pointed at the president’s chair which was painted with a half a sun on it.  He told his fellow delegates: “I have . . . often in the course of the session . . . looked at that behind the President without being able to tell whether it was rising or setting.  But now at length I have the happiness to know that it is a rising and not a setting sun.”  The delegates then retired to the City Tavern for a farewell dinner and “took a cordial leave of each other,” as George Washington wrote in his diary.[1]

Two days later, the Pennsylvania Packet and five other Philadelphia newspapers printed the Constitution.  Within three weeks, dozens of others across the country would submit the document to the American people for their consideration.  On September 28, Congress voted to send the handiwork of the Philadelphia Convention to the state legislatures to elect representatives to popular ratifying conventions.

The ratification of the Constitution was to be an expression of popular sovereignty as the people’s representatives would deliberate on the merits of the new government in popular conventions rather than state legislatures.  The Constitution would be accepted as fundamental law if accepted by nine of the thirteen states rather than the unanimity of the Articles of Confederation.  This method of ratification would additionally preserve the principle of federalism as several devices in the Constitution sought to preserve a balanced sovereignty between the national government and the states.

By the end of September, Franklin’s sanguine expectations seemed to be confirmed.  But, in October, the opponents of the Constitution rallied and published their criticisms in newspapers in different states.  The Pennsylvanian Independent Gazetteer published an article by “Centinel,” who warned the new government was the “most daring attempt to establish a despotic aristocracy among freemen, that the world has ever witnessed.”  The author was also deeply concerned that the document lacked a bill of rights that would secure such essential rights as liberty of the press.[2]  “Brutus,” meanwhile, in New York, warned that the new government would have unlimited power of taxation, which would destroy state government and act as “the great engine of oppression and tyranny.”[3]  These opponents of the Constitution were labeled “Anti-Federalists” though they believed they stood for a truly federal system rather than a consolidated one and were the true federalists.

In mid-October, Alexander Hamilton conceived of a series of essays in defense of the Constitution from its detractors on his journey from Albany to New York as he returned home from a session of the state supreme court.  When he arrived home, Hamilton consulted several friends about joining him in his project and John Jay and James Madison, who was in New York serving in the confederation congress, accepted Hamilton’s invitation.

On October 27, the New  York Independent Journal published Hamilton’s first Federalist essay written under the pseudonym “Publius.”  Although addressed to the people of New York, Hamilton originally intended the essays to influence the ratification of the Constitution at the New York Ratifying Convention where he expected significant opposition among Anti-Federalists.  To put it in relatively crude modern terms, it was meant to be a piece of political propaganda persuading the Anti-Federalists to ratify the Constitution.

The Philadelphia Convention, The Federalist, Anti-Federalist essays, and ratifying conventions, in addition to the informal debates in taverns among ordinary farmers, artisans, and merchants were all part of an unprecedented and incredible moment of reflective deliberation in world history.  The people and their representatives understood the significance of their debate on the principles of republican self-government for their country and their posterity.

Hamilton certainly realized the import of the American debate for countries around the world.  In a statement of American exceptionalism in the tradition of John Winthrop’s “City Upon a Hill,” Hamilton wrote in the very first Federalist essay:

It seems to have been reserved to the people of this country, by their conduct and example, to decide the important question, whether societies of men are really capable or not of establishing good government from reflection and choice, or whether  they are forever destined to depend upon their political constitutions on accident and force.[4]

Hamilton thought that if creating a republican government by consent failed under such propitious conditions during the American founding, that perhaps mankind was not meant to govern itself.

From October, 1787 to May, 1788, the triumvirate writing as Publius penned a total of eighty-five essays.  They were reprinted in other states and eventually bound in book form and shipped to states with particularly narrow support for the Constitution.  Madison himself ordered several copies to distribute to the delegates at the Virginia Ratification Convention to persuade them to support the new government.


********************
This essay is the first in a series of essays on The Federalist and its principles by WJMI Program Director, Tony Williams, as part of our September teacher seminar on the Constitution, celebrating its 235th anniversary.  Having laid down the historical context for its composition, subsequent essays will explore the principles of government that it espoused in the defense of the new Constitution.  Thus, the essays will answer the question why Thomas Jefferson and the University of Virginia Board of Visitors included The Federalist, along with the Declaration of Independence and George Washington’s Farewell Address, as the essential works for a proper understanding of the Constitution and an inculcation in the principles of American government in a true civic education.