Alexander Hamilton and American Greatness in the 1790'S 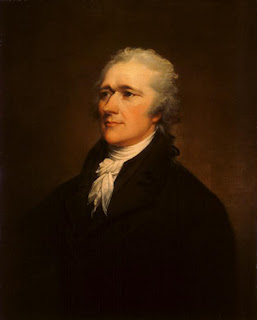 “On September 11, 1789, the Senate confirmed President George Washington’s appointment of Hamilton as Secretary of the Treasury. He worked all weekend to address immediate financial concerns and would spend the next decade at Washington’s side engaged in nation-building for the new republic.

As one of the primary authors of the Federalist and as a key delegate to the New York Ratifying Convention, Alexander Hamilton had been instrumental in winning ratification of the new Constitution strengthening the national government. During the 1790s, he would use the constitutional authority of that new government to build a lasting republic. Hamilton’s visionary financial plan was the foundation of his nation-building in the 1790s. The first part of the plan was to remedy the teetering financial footing of the new nation. After much debate and controversy, Congress eventually passed his plan for the federal government to assume the Revolutionary War debts of the states as well as the tariffs and excise taxes he wanted gradually to extinguish the debt.

Congress also easily passed the second part of Hamilton’s plan, which was to create a National Bank to circulate currency and lend money to promote economic growth. Despite the Jeffersonian accusations that he only advanced the interests of stock-jobbers and speculators, Hamilton’s economic vision included benefitting merchants, farmers, and artisans alike. The internal improvements that comprised the third part of the plan failed, but Hamilton helped to promote manufactures for the nascent industrial revolution. In a few short years, Hamilton’s triumph was vindicated by a thriving, dynamic economy. Hamilton successfully used the federal government to provide stability and order to the financial system that allowed individuals to thrive in the private free market.

Hamilton wanted to use strong economic growth to build a strong national security state for the young republic to survive in a world of contending empires. The nation needed the funding for national defense in case of emergencies. He adopted an expansive view of the executive power to act vigorously in foreign policy.

Despite an enduring historical legacy as a warmonger, Hamilton consistently sought to defend American interests and national honor with a policy of peace through strength. Whether during the debate over the Proclamation of Neutrality, the British impressment crisis and the controversial Jay Treaty, or organizing the army during the Quasi-War with France in the late 1790s, Hamilton pursued peace because he understood that the United States did not have sufficient power yet to oppose the great powers of Europe.

Hamilton spent a lifetime dedicated to public service to his adopted country. He was a war hero in the Revolutionary War, engaged in politics at the state and national level, and helped frame and ratify the Constitution. Influenced by his immigrant background and his service under Washington in the Continental Army, Hamilton quickly espoused a continental vision that shaped all of his writings and his statesmanship. As a result, Hamilton was one of the most important founding fathers who shaped the American regime of republican liberty and was responsible for working with Washington to build the new nation in the 1790s.”

Tony Williams the Program Director for WJMI and a Senior Teaching Fellow at the Bill of Rights Institute. He is the author of six books on the American founding including his newly-published Hamilton: An American Biography (Rowman & Littlefield, 2018).
Posted by J. David Gowdy at 10:35 PM No comments: