The Remarkable Dream of Benjamin Rush 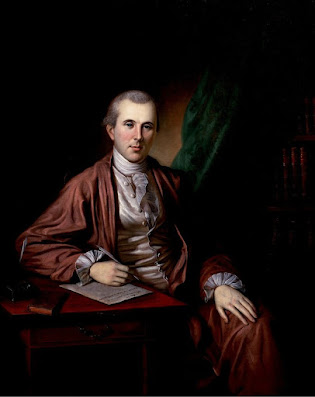 Although Thomas Jefferson had served closely with John Adams during the Revolution, he later became one of his chief political rivals during the first administration of President George Washington. Accumulated political quarrels and disputes between them had eventually embittered Adams and alienated Jefferson, resulting in a lengthy estrangement of over ten years with no contact or communication. This lingering chasm troubled their mutual friend Dr. Benjamin Rush, also a signer of the Declaration who had labored with them during the Revolution and had remained close to both men. In the midst of his deep concerns over the fractured relationship between Adams and Jefferson, one night several months after Jefferson’s retirement from the Presidency in 1809, Dr. Rush had a dream about the two which he felt contained a prophetic message. On October 17, 1809, he wrote down an account of that dream and sent it to John Adams. In describing that dream, he related what he had seen:

…What book is that in your hands said I to my son Richard a few nights ago in a dream? “It is the history of the United States sir said he. Shall I read a page of it to you”—? “no, no said I—I believe in the truth of no history but in that which is contained in the old & new testaments.” “But Sir—said my Son, this page relates to your friend Mr. Adams.” “Let me see it then said I.” I read it with great pleasure, and herewith send you a copy of it.

1809 “Among the most extraordinary events of this year was the renewal of the friendship & intercourse between Mr. John Adams and Mr. Jefferson, the two ex-presidents of the United States. They met for the first time in the Congress of 1775. Their principles of liberty, their Ardent Attachment to their Country and their views of the importance and probable issue of the struggle with Great Britain in which they were engaged being exactly the same, they were strongly attracted to each other, and became personal, as well as political friends. They met in England during the War while each of them held commissions of honor & trust at two of the first Courts of Europe, and spent many happy hours together in reviewing the difficulties & success of their respective negotiations. A difference of opinion upon the Objects and issue of the French Revolution separated them during the years in which that great event interested and divided the American people. The predominance of the party which favored the French cause, threw Mr. Adams out of the Chair of the United States in the year 1800, and placed Mr. Jefferson there in his Stead. The former retired with resignation and dignity to his Seat at Quincy where he spent the evening of his life in literary and philosophical pursuits surrounded by an amiable family and a few Old and Affectionate friends. The latter resigned the Chair of the United states in the year 1808 sick of the cares and disgusted with the intrigues of public life, and retired to his Seat at Monticello in Virginia where he spent the remainder of his days in the cultivation of a large farm agreeably to the new System of husbandry. In the month of November 1809 Mr. Adams addressed a short letter to his Old friend Mr. Jefferson in which he congratulated him upon his escape to the shades of retirement and domestic happiness, and concluded it with assurances of his regard and good wishes for his Welfare. This letter did great honor to Mr. Adams. It discovered a magnanimity known only to great minds. Mr. Jefferson replied to this letter, and reciprocated expressions of regard and esteem. These letters were followed by a correspondence of several years, in which they mutually reviewed the Scenes of business in which they had been engaged, and candidly acknowledged to each other all the errors of Opinion & conduct into which they had fallen during the time they filled the same stations in the Service of their country. Many precious aphorisms, the result of Observation, experience, & profound reflection it is said are contained in these letters. It is to be hoped, the World will be favored with a sight of them, when they can neither injure nor displease any persons or families whose ancestor’s follies or crimes were mentioned in them. These gentlemen sunk into the grave nearly at the same time, full of years, and rich in the gratitude and praises of their country (for they outlived the heterogeneous parties that were opposed to them) and to their numerous merits and honors posterity has added, that they were Rival friends.”

— With affectionate regard to your fire side in which all my family join I am Dr: Sir your / sincere Old friend
Benjamin Rush

Over a month passed, and Adams replied to Dr. Rush.

I thank you for the pleasing account of your Family in your favor of the 5th. As I take a lively interest in their Prosperity and Felicity, your relation of it gave me great Pleasure. We have Letters from our Colony navigating the Baltic, dated at Christians and. They had been so far as prosperous, healthy and happy as such Traveler’s could expect to be… I really do not know whether I do not envy your City of Philadelphia for its Reputation for Science, Arts and Letters and especially its Medical Professor. I know not either whether I do not envy you your Genius and Imagination. Why have not I some Fancy? some Invention? some Ingenuity? some discursive Faculty? Why has all my Life been consumed in searching for Facts and Principles and Proofs and Reasons to support them? Your Dreams and Fables have more Genius in them than all my Life…

But my Friend there is something very serious in this Business. The Holy Ghost carries on the whole Christian system in this earth…There is no Authority civil or religious: there can be no legitimate Government but what is administered by this Holy Ghost. There can be no salvation without it…

Your Prophecy my dear Friend has not become History as yet. I have no Resentment or Animosity against the Gentleman [Jefferson] and abhor the Idea of blackening his Character or transmitting him in odious Colors to Posterity. But I write with difficulty and am afraid of diffusing myself in too many Correspondences. If I should receive a Letter from him however I should not fail to acknowledge and answer it...

I am Dear Sir with every friendly sentiment yours
John Adams

More time passed. Early in 1811, Dr. Rush advised Jefferson of his ardent wish that “a friendly and epistolary intercourse might be revived” between the two men, expressing his firm belief that “an Advance on your Side will be a Cordial to the heart of Mr. Adams.” Yet all of these initiatives bore no fruit.

In the summer of 1811, however, Jefferson’s neighbors Edward Coles and John Coles visited John Adams in Quincy, and Adams stated to them that, “I always loved Jefferson, and still love him.” After these words reached Jefferson, he was moved, and on December 5, 1811 he wrote to Rush about the continued warmth and depth of his feelings for his old friend Adams. Sensing an opportunity, Dr. Rush soon passed the pertinent passages from Jefferson’s letter along to Adams. An olive branch having been extended, Rush implored Adams to write to Jefferson and for the two men to “embrace each other! Bedew your letters of reconciliation with tears of affection and joy. Bury in silence all the causes of your separation. Recollect that explanations may be proper between lovers but are never so between divided friends.”

Adams took the first step and wrote to Jefferson on January 1, 1812, concluding "I wish you Sir many happy New years and that you may enter the next and many Succeeding years with as animating Prospects for the Public as those at present before us. I am Sir with a long and Sincere Esteem your Friend and Servant." Jefferson replied with a gracious letter to Adams on January 21st, in which he wrote "A letter from you calls up recollections very dear to my mind. It carries me back to the times when, beset with difficulties & dangers, we were fellow laborers in the same cause, struggling for what is most valuable to man, his right of self-government." Much to Dr. Rush's delight, thus began a cordial renewing of a warm and sincere friendship between his former friends. Jefferson and Adams' subsequent correspondence reestablished one of the most celebrated intellectual dialogues and literary conversations in American history. Their letters fill a volume and spanned fourteen years, embracing the subjects of government, liberty, religion, philosophy, agriculture, and family griefs and joys, etc. And, as described in Dr. Rush’s dream, Adams and Jefferson both “sunk into the grave nearly at the same time” -- on the exact same day – the 50th Anniversary of the Declaration of Independence, July 4, 1826.
See: "The Adams-Jefferson Letters" http://wjmi.blogspot.com/2017/04/the-adams-jefferson-letters.html
_______________________________
Reference: Lyman H. Butterfield, “The Dream of Benjamin Rush: The Reconciliation of John Adams and Thomas Jefferson,” Yale Review 40, 1950). [Quoted in the United States National Archives online: https://founders.archives.gov/documents/Jefferson/03-04-02-0296-0001].
Posted by J. David Gowdy at 9:56 PM