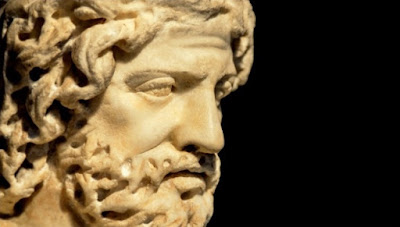 From the Online Library of Liberty:

"The concise biographies of famous Greek and Roman men (Parallel Lives) written by the Greek philosopher and priest Plutarch under the early Roman Empire are true classics in the literature of Western civilization. Following the Renaissance’s rediscovery of ancient Greek literature, his Parallel Lives inspired leading authors and thinkers. Montaigne, Shakespeare, Dryden, Rousseau, and Emerson––all were avid readers of Plutarch. The public loved Plutarch, too: from the founding of this country until well into the nineteenth century, a translation of Plutarch’s Parallel Lives was the second most likely book to be found in American homes, following only the Bible. Plutarch’s biographies were regarded as essential reading for young people because they revealed in dramatic fashion just how much character mattered in moral choices.

Plutarch writes biographies focused on individual character, not the details of history. Therefore, he explores his subjects’ characters and their responses as free and responsible individuals to moral challenges, whether posed by small things or momentous events. Plutarch concentrates on crucial moments in their lives at which they face difficult decisions. When right and wrong are not obvious in these situations, Plutarch is not reluctant to judge his subjects, but in the end he expects his readers to shoulder the task of evaluating the wisdom of the choices his subjects make. Plutarch’s goal in his biographies is to present readers with examples of conduct to imitate and to avoid in their own lives. Plutarch’s Parallel Lives therefore has important insights into liberty and responsibility. These qualities combine to make the Parallel Lives a worthy candidate for [study and discussion] by high school teachers [and their students], who daily face issues of character and morality and thus can bring some important insights into these texts.

I: Alcibiades and Athenian Democracy. ...As Plutarch reveals, Alcibiades of Athens was an individual whose great talents and advantages in life were matched by his desire and ambition. His aristocratic birth, his wealth, his brilliance, and his freedom of action in Athens’s democratic society and politics gave him both a high level of individual liberty and of personal responsibility for the fate of his homeland. He could have led Athens to victory in the Peloponnesian War in defense of its independence and imperial power, but instead he fled into exile when attacked politically and gave strategic and tactical advice to the Spartans, gravely damaging Athenian prospects in the war. This ...raise[s] issues of the intersection of private conduct and public leadership in Alcibiades’ career, especially in the context of ancient Athenian democracy and the contested issue of whether it privileged equality at the expense of liberty. Finally, ...consider whether a commitment to individual liberty can ever justify betrayal of one’s homeland.

II: Coriolanus and the Roman Republic. ...As in the case of Alcibiades, he was, as Plutarch shows, a man of tremendous talent and equally powerful ambition. ...[C]onsider what went wrong in his career and where responsibility lies for his failure at Rome. He was a citizen with the social rank to enjoy individual liberty in early Republican Rome, yet he betrayed his country in war. Did he fail to balance his liberty with a concomitant sense of responsibility? Plutarch offers judgments in his short comparison of Alcibiades and Coriolanus...

III: Alexander: Conqueror or Liberator? The biography of Alexander the Great opens with our best surviving description of Alexander’s youth and the formation of his character. Plutarch narrates Alexander’s tortured relationship with his father, king Philip of Macedon, and his mother, the foreign Queen Olympias, the formation of his character as a youth, the tumultuous events surrounding his father's assassination, and his violent accession to the kingship of Macedon and the hegemony over Greece. Plutarch paints a fascinating and evocative picture of a young man nurtured by conflicting forces: the violent, hard-drinking machismo of Macedonian society and the intellectual aspirations instilled by history’s most distinguished tutor, Aristotle.  ...[C]onsider what effects Alexander’s upbringing had on his astonishing career as a conqueror and diffuser of Greek civilization in the territories of the former Persian Empire.

IV: The Personality and Politics of Julius Caesar. Plutarch shows Caesar yearning to equal Alexander’s fame and struggling to gain power in the violent politics of the disintegrating Roman Republic. Like the other men whose biographies we are reading, Caesar must wrestle with the issue of how to balance his desire for personal glory with his responsibility to his community. ...[W]hy does Caesar [become] so wildly popular at Rome and also why he encounters such bitter opposition from a faction of the senatorial elite[?] ...[Do] the reactions to Caesar reflected traditional Roman attitudes to the liberty and responsibility of the different social classes at Rome[?] This question becomes more pressing as the story of Caesar proceeds. In the later years of his life, a dilemma arises that provoked his murder and destroyed the republic: how a charismatic leader should suppress anarchy and restore peace after civil war without ruling as a king and therefore abolishing the liberty of the citizens by turning them into subjects.

V: Antony as Roman General and Politician. The life of Mark Antony provides appropriate material for the meeting’s final two sessions because it is significantly longer than the other lives and also describes Cleopatra and her plans to remake the Mediterranean world politically. Plutarch starts out by describing Antony's family background, the early evidence for his character as revealed in adolescent improprieties and worse, and the development of his ambiguous political relationship with Caesar. Plutarch then shows how Antony’s ambitions for power after Caesar’s assassination contribute to the turmoil that explodes into another civil war, one that would end the republic and bring to power Octavian, the eventual founder of the Roman Empire (as the first emperor, Augustus). As with Alcibiades, ... how important Antony’s outrageous private conduct is in influencing the deterioration of the public sphere in his homeland: does he misuse his personal liberty so seriously that his behavior amounts to shirking his responsibility as a free Roman citizen of elite status?

VI: Antony and Cleopatra. In the latter part of the biography of Antony, Plutarch provides our best surviving evidence for Antony’s erotic and political entanglement with the remarkable Cleopatra, Queen of Egypt. Plutarch implicitly poses the question of whether the pair’s personal passions fatally undermine their innovative plans for ruling the eastern Mediterranean world as a shared Roman-Egyptian sphere of interest. Plutarch depicts in detail Antony’s indecisiveness and enslavement to passion, character flaws that turn out to be fatal in the face of Octavian’s cold and calculating approach to life, love, and politics. ...[C]onsider in what sense Antony and Cleopatra are free actors in this drama, and what would have been the effects on individual and political liberty in the Mediterranean world if they had been successful instead of Octavian.

[Each of these lives] depict extraordinary individuals who, through the force of their characters and the power of their actions, had extraordinary effects on their societies. Since they were all free citizens, not subjects, they could operate with liberty, and they had corresponding responsibilities."

From Article and Lesson Outline at: http://oll.libertyfund.org/pages/plutarch-s-parallel-lives

References to Plutarch’s Lives. The Translation called Dryden’s. Corrected from the Greek and Revised by A.H. Clough, in 5 volumes (Boston: Little Brown and Co., 1906)
Posted by J. David Gowdy at 11:36 AM