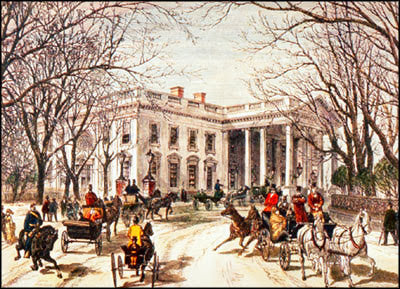 “When the second President of the United States, John Adams, and his wife Abigail, moved into what would come to be known as the White House [in November 1800], the residence was cold, damp, and drafty. Sitting at the edge of a dreary swamp, the First Family had to keep 13 fireplaces lit in an effort to stay comfortable. It is in this setting that the cantankerous president held the first ever White House Christmas party in honor of his granddaughter, Susanna. It could be said that the invitations sent for this party were the very first White House Christmas cards, though in those early days, the building was referred to as the President’s Palace, Presidential Mansion, or President’s House.

The affair was planned in large part by the vivacious First Lady, Abigail Adams, and was considered a great success. A small orchestra played festive music in a grand ballroom adorned with seasonal flora. After dinner, cakes and punch were served while the staff and guests caroled and played games. The most amusing incident of the evening occurred when one of the young guests accidentally broke one of the First Granddaughter’s new doll dishes. Enraged, the young guest of honor promptly bit the nose off of one of the offending friend’s dolls. The amused president had to intervene to make sure the incident didn’t take an uglier turn.”

Following the Adams’ first Christmas in the White House, they held the first presidential levee on New Year’s Day.

“As you can imagine, the celebration was grand! Cookies, custards, and cakes, all baked in the new hearths on either side of the enormous kitchen fireplace, were served, along with all kinds of puddings, pastries, trifles, and tarts. Borrowing court etiquette from European kings and queens she had seen while John was U. S. Ambassador to Britain, Abigail regally greeted guests from a throne-like chair. Standing proudly beside her was her husband, wearing velvet breeches and lace with fashionably powdered hair.

Although that reception was a lavish affair, John and Abigail preferred more basic fare, and a few of their favorite foods, which can be traced to their New England roots, included Green Turtle Soup, Indian Pudding, and Gooseberry Fool.”
_________________________________
Sources:
http://www.whitehousechristmascards.com/john-adams-1797-1801/john-adams/
http://lincolnslunch.blogspot.com/2010/07/john-and-abigail-adams-indian-pudding.html
Posted by J. David Gowdy at 9:01 PM