Thomas Jefferson as Neighbor and Friend 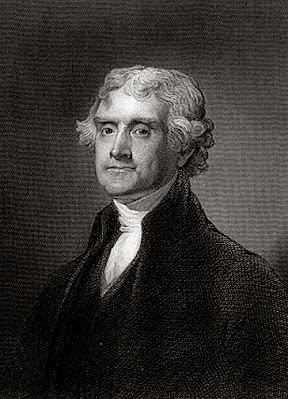 Much has been written about Thomas Jefferson as a revolutionary leader, President, and statesman, etc., but what was he like at home – as a neighbor, and as a friend?  “Jefferson was remarkably persistent in his efforts to consolidate a ‘society of friends and neighbors’ near Monticello. As early as the 1760s, he tried to convince friends of the necessity of proximity for the enjoyment of ‘philosophical evenings.’ To render such evenings more palatable, Jefferson helped introduce Italian wines and vegetables to the neighborhood in 1773 by giving Phillip Mazzei 193 acres of land contiguous to Monticello and subscribing to his ‘Wine Company.’ Mazzei named his farm ‘Colle,’ and purchased about 700 more acres by 1778. Francis Alberti, Jefferson's violin teacher in Williamsburg, also moved to Albemarle County at Jefferson's urging and taught music as well as dancing to family members and local youth, including James Madison.” (“Monticello Neighborhood,” at http://www.monticello.com).

In 1786, while away from his beloved Monticello in Paris, Thomas Jefferson wrote his feelings about the duties and blessings of friendship to a dear new acquaintance and friend:

A friend dies or leaves us: we feel as if a limb was cut off. He is sick: we must watch over him, & participate of his pains. His fortune is shipwrecked; ours must be laid under contribution. He loses a child, a parent, or a partner: we must mourn the loss as if it were our own…

And what more sublime delight than to mingle tears with one whom the hand of heaven hath smitten! To watch over the bed of sickness, & to beguile its tedious & its painful moments! To share our bread with one to whom misfortune has left none! This world abounds indeed with misery: to lighten its [burden] we must divide it with one another…

For assuredly nobody will care for him who cares for nobody. But friendship is precious, not only in the shade but in the sunshine of life; and thanks to a benevolent arrangement of things, the greater part of life is sunshine. (Letter to Maria Cosway, 1786)

Later in life, he wrote about his daily routine that included time each evening for his neighbors and friends: “My mornings are devoted to correspondence, from breakfast to dinner I am in my shops, my garden, or on horseback among my farms. From dinner to dark I give to society and recreation with my neighbors and friends, and from candlelight to early bedtime, I read…I talk of ploughs and harrows, of seeding and harvesting, with my neighbors, and of politics, too, if they choose, with as little reserve as the rest of my fellow citizens, and feel, at length, the blessing of being free to say and do what I please, without being responsible for it to any mortal. A part of my occupation, and by no means the least pleasing, is the direction of the studies of such young men as ask it. They place themselves in the neighboring village, and have the use of my library and counsel, and make a part of my society.” (Letter to Thaddeus Kosciusko, Feb. 2, 1810).

Two of Thomas Jefferson’s closest friends were James Madison and John Adams. Jefferson and Madsion probably met in May 1776 while serving together in the Virginia House of Delegates. Becoming probably Jefferson’s closest friends, James and his wife Dolley, had their own guest room, the “Madsion room,” at Monticello to accommodate their regular visits.  Their home at Montpelier was only 28 miles away – a day’s journey in the 18th century.  Jefferson and Madsion’s common passion for human equality and liberty was shared and nurtured between them, to the benefit of our young nation, the rest of their lives. Their joint collaboration produced the landmark Virginia Statute for Religious Freedom, as well as the establishment of the University of Virginia.

The close friendship between Thomas Jefferson and John Adams began when they met at the 1775 Continental Congress in Philadelphia. “Although different in many ways down to their appearance, the two developed a strong respect and liking for one another. In 1776, they worked together on the committee to draft the Declaration of Independence, and in 1784, Jefferson joined Adams in France on diplomatic service. While Jefferson remained in Paris, Adams served primarily in London, from where, Jefferson wrote Abigail Adams, he considered her "as my neighbor." …Through their work and play, Jefferson and the Adamses became close friends. Jefferson revealed his affection to James Madison, writing that Adams "is so amiable, that I pronounce you will love him if you ever become acquainted with him." Mrs. Adams once called Jefferson "one of the choice ones of the earth," and Mr. Adams wrote Jefferson that "intimate Correspondence with you . . . is one of the most agreeable Events in my Life." (“John Adams,” at http://www.monticello.com).

Jefferson and Adams became alienated through the political strife of party politics and the Presidential election of Jefferson in 1801. However, ten years later in 1811 their friendship was renewed through the efforts of their mutual friend, Benjamin Rush.  This significant occasion evidences the capacity of Jefferson’s heart for forgiveness and his willingness to set aside the “baneful spirit of party.” Adams may have been alluded to by Jefferson in this letter to Benjamin Rush, “I find friendship to be like wine, raw when new, ripened with age, the true old man's milk and restorative cordial.” (Letter to Benjamin Rush, August 17, 1811).  Their letters constitute a great treasure of political thought and practical wisdom (see: http://wjmi.blogspot.com/2017/04/the-adams-jefferson-letters.html). After fifteen years of resumed friendship and correspondence, on July 4, 1826, Jefferson and Adams died within hours of each other. Unaware that his friend had died hours earlier, Adams' family later recalled that his last spoken words were, "Thomas Jefferson survives.”

Thomas Jefferson Randolph, Jefferson’s eldest grandson, wrote this tribute to his grandfather’s character, including his loyalty as a friend: “His moral courage [was of] of the highest order – his will firm and inflexible --- it was remarked of him that he never abandoned a plan, a principle, or a friend.” (quoted in Sarah N. Randolph, “The Domestic Life of Thomas Jefferson” (Harper & Brothers, New York, 1872), p. 338).  In addition to his role as an American Founding Father, Jefferson’s legacy as a good neighbor and loyal friend provides an example worthy of reflection and emulation.
_________________________________
See also: "All Men are Created Equal: America's Defining Creed"
and: "Jefferson and Slavery"