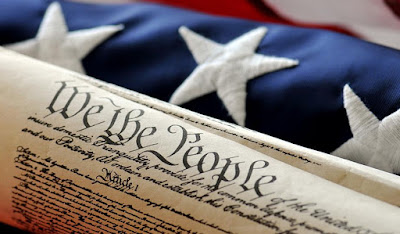 The Buena Vista and Lexington, Virginia Celebration of Constitution Day will be held Tuesday evening, September 17th from 7:00 p.m. - 8:00 p.m. at the historic Wesley Chapel in Lexington. The event is co-sponsored by the local chapters of the Daughters of the American Revolution (Virginia Frontier-Lexington and Natural Bridge) (https://www.dar.org/) and by the George Washington Center for Constitutional Studies (GWCCS) (http://georgewashingtoncenter.org/). GWCCS is a nonpartisan academic institute that promotes Civic Education, and the instruction, study, and ideological defense of the principles of the American Founding, the Constitution of the United States of America, the Bill of Rights, and the Declaration of Independence, based on natural law principles using primary sources.
The Daughters of the American Revolution ask local government leaders to issue annual proclamations honoring Constitution Day and have also established the tradition of the “Ringing of the Bells” at 4:00 p.m. EDT on that day.  The mayors of both Lexington and Buena Vista and the Rockbridge County Board of Supervisors will be issuing proclamations. Lee Chapel at Washington & Lee University and several local churches have agreed to toll their bells.

Music for the event will be provided by students from the Virginia Military Institute (VMI) and Southern Virginia University.  Additionally, there will be two speakers:
Tony Williams will speak on the statesmanship of James Madison and the art of compromise. He is currently employed as a Senior Fellow at the Bill of Rights Institute in Washington D.C. and  is the Program Director of the Washington, Jefferson & Madison Institute. Tony attended Syracuse University where he earned a B.A. in history and Ohio State University where he earned an M.A. in American history.  He has written six books on colonial and Revolutionary America: Hamilton: An American Biography (2018), Washington & Hamilton: The Alliance that Forged America (2015)(co-authored with Stephen P. Knott), The Jamestown Experiment (2011), America’s Beginnings (2010), The Pox and the Covenant (2010) and Hurricane of Independence(2008). He has taught history at the secondary school level for fifteen years.

J. David Gowdy will speak on the relationship between the Constitution and the Declaration of Independence. He is the President and Executive Director of the George Washington Center for Constitutional Studies.  He received his B.A. from Kansas State University and his J. D. degree from the J. Reuben Clark Law School at Brigham Young University. He is also the founder of the Washington, Jefferson & Madison Institute which has been providing continuing education courses to Virginia U.S. government and history teachers since 2007. He currently serves on the Board of the Thomas Jefferson Heritage Society (Charlottesville).

The public is invited to attend. 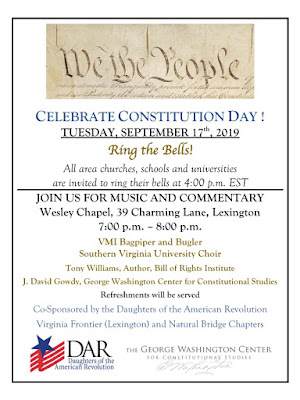