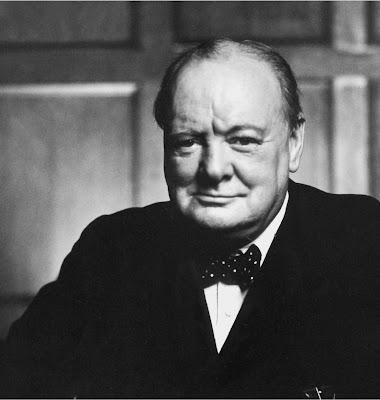 “Sir Winston Churchill (1874-1965) is best known for his leadership as Prime Minister of Great Britain during the Second World War, but it should be remembered that this period of heroism was the high point of a long and varied career in British politics. He was elected to the House of Commons in 1900 and was to continue as a member of the House for 64 years, holding every major Cabinet post except the Foreign Ministry and ascending to the office of Prime Minister twice. This extensive political experience produced deep and often underappreciated reflection on political matters.”[1]  He reflected, spoke and wrote often on the subject of “the great principles of freedom and the rights of man.”  In this regard, Churchill admired America, and particularly its founding principles.  He called America “The Great Republic.” Following are quotes from Churchill on the principles of the Declaration of Independence, the Constitution, and individual liberty:

“I have been in full harmony all my life with the tides which have flowed on both sides of the Atlantic against privilege and monopoly, and I have steered confidently towards the Gettysburg ideal of "government of the people by the people for the people." In my country, as in yours, public men are proud to be the servants of the State and would be ashamed to be its masters.”[2]

“The Declaration was in the main a restatement of the principles which had animated the Whig struggle against the later Stuarts and the English Revolution of 1688, and it now became the symbol and rallying centre of the Patriot cause.”[3]

“The Declaration is not only an American document. It follows on the Magna Charta and the Bill of Rights as the third great title deed on which the liberties of the English-speaking peoples are founded.”[4]

“In the main, Law and Equity stand in the forefront of the moral forces which our two countries have in common, and rank with our common language in that store of bonds of unity on which I firmly believe our life and destiny depend....”[5]

“But we must never cease to proclaim in fearless tones the great principles of freedom and the rights of man which are the joint inheritance of the English-speaking world and which through Magna Charta, the Bill of Rights, the Habeas Corpus, trial by jury, and the English common law find their most famous expression in the American Declaration of Independence.”[6]

“All this means that the people of any country have the right, and should have the power by constitutional action, by free unfettered elections, with secret ballot, to choose or change the character or form of government under which they dwell; that freedom of speech and thought should reign; that courts of justice, independent of the executive, unbiased by any party, should administer laws which have received the broad assent of large majorities or are consecrated by time and custom. Here are the title deeds of freedom which should lie in every cottage home. Here is the message of the British and American peoples to mankind.”[7]

“The rigidity of the Constitution of the United States is the shield of the common man.”[8]

“I hold that governments are meant to be, and must remain, the servants of the citizens; that states and federations only come into existence and can only be justified by preserving the "life, liberty and the pursuit of happiness" in the homes and families of individuals. The true right and power rest in the individual. He gives of his right and power to the State, expecting and requiring thereby in return to receive certain advantages and guarantees.”[9]

“In both our countries the character of the judiciary is a vital factor in the maintenance of the rights and liberties of the individual citizen. Our judges extend impartially to all men protection, not only against wrongs committed by private persons, but also against the arbitrary acts of public authority. The Independence of the courts is, to all of us, the guarantee of freedom and the equal rule of law…From what I have written it is plain that I incline to the side of those who would regard it as a bulwark, and that I rank the citizen higher than the State, and regard the State as useful only in so far as it preserves his inherent rights.”[10]

“Limitations on the power of government to prevent the concentration of power in a few hands were central to the American Founding; hence the separation of powers and the carefully crafted interaction of the branches of government.”[11]

“The founders of the Union, although its corpus was then so much smaller…did not think it possible to entrust legislation for so diverse a community and enormous an area to a simple majority. They were as well acquainted with the follies and intolerance of parliaments as with the oppression of princes.”[12]