Remembering George Washington as Father of our Nation 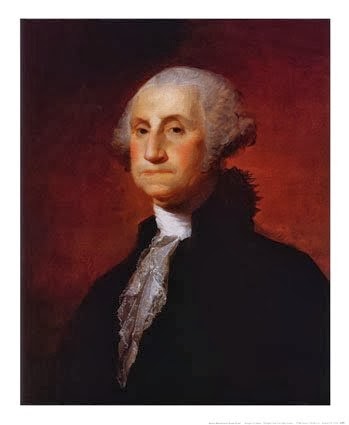 Americans remembered and honored Washington on his Birthday long before Congress declared it a federal holiday.[1] Each February 22nd, in numerous towns and cities, citizens gathered, bands marched and played and patriotic speeches were given in tribute to our first President.[2]  His adopted hometown of Alexandria, Virginia continues this tradition.[3]

The centennial of Washington’s birth in 1832 prompted festivities nationally and Congress established a Joint Committee to arrange for the occasion.[4] The House of Representatives and the Senate commemorated the 130th Anniversary of Washington's birth in 1862 by reading aloud his Farewell Address (this became a tradition that is still observed to this day).  Also, in that same year of 1862, on February 19th, President Abraham Lincoln issued this Presidential Proclamation to all Americans:

It is recommended to the people of the United States that they assemble in their customary places of meeting for public solemnities on the twenty-second day of February instant, and celebrate the anniversary of the birth of the Father of His Country by causing to be read to them his immortal Farewell address.[5]

More than a passing thought, how many of us as citizens, and how many of our nation’s students, will take time to read and ponder Washington’s Farewell Address?

It is not always easy for us to remember our own immediate ancestors, let alone a man who lived and died over 200 years ago. Yet, there is a power in remaining connected to our past …to our fathers. As Alexander Solzhenitsyn said, “A people which no longer remembers has lost its history and its soul.”  Let us ask, can a nation forget their father?  Can we divorce the Father of our Nation, or his memory, from the harsh social and economic realities we face in this country as children whose hearts have ostensibly turned from him, ignored his counsel, and even abandoned his legacy?  In the halls of Congress, in our schools, and in our homes … have we forgotten George Washington?

Today, many historians continue to debate whether he was a Christian or a deist  – but no one who earnestly studies his life can doubt that he was a truly virtuous and religious man, by any standard. As Thomas Jefferson said of him, Washington “was, indeed, in every sense of the words, a wise, a good, and a great man.”[6]

The story of young Washington chopping down the Cherry tree was discredited decades ago, and yet if there ever was an honest statesman and President – he is that man. In spite of that, many self-anointed “experts” have continued to “chop down” Washington himself, while some prominent leaders and politicians embrace equivocations and shades of dishonesty as an “art of governance.”

His portrait used to hang in the halls of our schools,  and his “Immortal” Farewell Address was once required reading for American Civics in high schools and universities.[7]  Now the most students seem to learn of him is that he owned slaves and had “wooden teeth” (his dentures were actually made of ivory).

Finally, some of our generation have dismissed Washington as “racist” – blindly ignoring his life and sacrifices devoted to human liberty, and the foundation of the principles of the Declaration of Independence that he and others laid for us upon which to labor to complete the difficult work of racial equality that they first undertook. Unfortunately, we have come to expect that all great changes must be achieved in a single lifetime, or in the equivalent of a movie trilogy…

Two hundred twenty five years ago this April 30th, 1789, George Washington sworn in as the first President of the United States. Washington took his Constitutional oath of office with his right hand resting on the Bible, which had been opened to Genesis, chapter 49.  His head bowed in a reverential manner, he added in a clear and distinct voice, "I swear, so help me God!"*(see comment) then bowing over the Bible, he reverently kissed it, whereupon Mr. Livingston exclaimed in a ringing voice, "Long live George Wash­ington, President of the United States!" To preserve the memory of that event, a page was inserted in that Bible with the date and an inscription that included this poetic verse:

Fame stretched her wings and with her trumpet blew.
Great Washington is near. What praise is due?
What title shall he have? She paused, and said
‘Not one - his name alone strikes every title dead.[7]

George Washington passed from this life on December 14th, 1799.  In the Official Eulogy delivered by Henry Lee of Virginia, he declared that Washington was "First in war, first in peace, first in the hearts of his countrymen."   Is it still so, or can it be so?  It is our sincere hope at the Washington, Jefferson & Madison Institute that our nation’s teachers and parents will faithfully continue, or choose to commence, the study and teaching of Washington’s life and character, and his Farewell Address, thus turning our hearts and our children’s hearts to him, that our generation and generations to come will not fail to remember and honor America’s Founding Father.

J. David Gowdy is the Founder and President of the Washington, Jefferson & Madison Institute.


[1] Washington’s birthday was first celebrated at Valley Forge on February 11, 1778 (Washington was 46 years old) with a serenade by the band of the Fourth Continental Artillery.
[2]  See, e.g., February 22, 1860 Celebration in New York City, http://www.nytimes.com/1860/02/23/news/washington-s-birthday-inauguration-mill-s-statue-washington-speech-hon-thomas-s.html; and "George Washington Birthday Celebrations," http://www.raggedsoldier.com/wash_bday.pdf
[3] The city celebrates the General's birthday throughout the month of February with more than a dozen festivities, including the George Washington Birthday Parade. See http://www.visitalexandriava.com/calendar-of-events/alexandria-george-washington-birthday/
[4]  National Archives online: http://www.archives.gov/legislative/features/washington/
[5] Abraham Lincoln, Executive Letter dated February 19, 1862, James D. Richardson, ed., "Messages and Papers of the Presidents," (Government Printing Office, Washington D.C.,1902), 5:3289-90.
[6]  Jefferson to Dr. Walter Jones, January 2, 1814, ME 14:48-52.
[7]  See Minutes of the Board of Visitors of the University of Virginia, March 4, 1825, ME 19:460-61 (http://www.liberty1.org/UVA1825.pdf). In contrast to our modern Civics textbooks, during the 19th Century prominent Constitutional textbooks written for use in public schools included the entire text of the Farewell Address, such as Furman Sheppard’s The Constitutional Text-Book: A Practical and Familiar Exposition of the Constitution of the United States, (Childs & Peterson, Philadelphia, 1855), and Harvard law professor Joseph Story’s A Familiar Exposition of the Constitution of the United States (Harper & Brothers, New York, 1884).
[8]  Bible owned by Ancient York Masons, St. John’s Lodge No. 1, See: http://www.stjohns1.org/portal/gwib
Posted by J. David Gowdy at 7:44 AM

The above article says, His [Washington's] head bowed in a reverential manner, he added in a clear and distinct voice, "I swear, so help me God!" then bowing over the Bible, he reverently kissed it, ... The part about Washington adding a religious codicil to the presidential oath of office is a piece of American folklore. See “So Help Me God”: A George Washington Myth that Should Be Discarded by Peter R. Henriques.