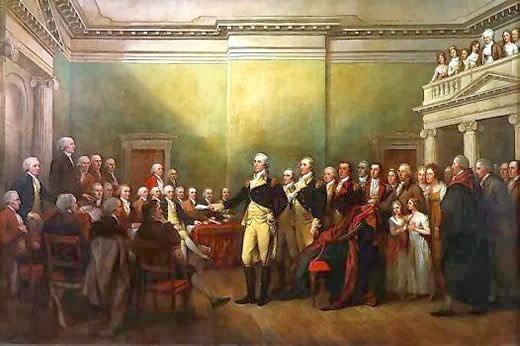 With all due respect to Tom Brokaw and our World War II veterans, the founding generation was the greatest American generation. The American founders defeated the superpower of their time and overcame parochial interests and powerful passions to prove that “societies of men are really capable … of establishing good government from reflection and choice.”

What was true of the founding as a whole was true of the American presidency – George Washington was the “indispensable man.” Washington’s reputation for integrity legitimated an office that was viewed with suspicion by many of his fellow citizens. Washington was the only national figure who was known to his fellow citizens (other than Benjamin Franklin, who was 83 when Washington was elected) and trusted by them to safely wield the powers the president was granted in article two of the new Constitution. Suffice it to say that these powers were unlikely to have been granted without the assumption by the delegates at the Constitutional Convention that George Washington would be the first president.

George Washington was inaugurated on April 30, 1789, taking the helm of an executive branch with a mandate to execute, and more importantly, define, the nebulous powers of article two.  His great collaborator and author of the Federalist essays explaining the powers of the presidency was Alexander Hamilton who had a significant influence on President Washington.

In his Federalist essays Hamilton argued that an “energetic executive” was a crucial ingredient for the preservation of the nation and the protection of liberty. Hamilton contended that the President needed to be equipped with “competent powers” and be given incentives to resist congressional incursions on his power through a fixed salary and a lengthy term of office that would allow him to implement his plans. Hamilton also argued that “unity” in the executive, meaning one person, not a committee, was a vital element for presidential success. He noted in Federalist # 74 that “of all the cares or concerns of government, the direction of war most peculiarly demands those qualities which distinguish the exercise of power by a single hand.” The president brings to the conduct of war and foreign policy the essential qualities of “decision, activity, secrecy and dispatch.” Again, for Washington and Hamilton the ability of the nation to coherently conduct war and foreign affairs was deeply felt by both men, for they had seen, up close and personal, the near-disastrous results of conducting war by committee.

George Washington wasted no time in attempting to flesh out the details of the President’s article two powers (and he wasted no time appointing his first cabinet member, Alexander Hamilton). Washington’s First Annual Message to Congress (commonly referred to today as “The State of the Union Address”) included a request for a “secret service fund.” This fund would be controlled by the president and would allow the chief executive to conduct secret operations free from congressional oversight. The “Contingency Fund” passed in 1790 and granted the President the authority to avoid the usual reporting procedures mandated by Congress – the President was essentially given a blank check in order to conduct clandestine operations he deemed to be in the national interest. Those who claim today that the founders were champions of transparency and deference to Congress in the conduct of foreign relations, especially regarding secret operations, are simply wrong.

George Washington set a number of other precedents that would be cited by his successors to justify presidential leadership in matters of war and national security. In the early days of his presidency, Washington believed that his power to negotiate treaties was shared with the Senate, but after a dismal experience where he genuinely sought the advice of the upper chamber, he quickly abandoned the practice. Washington also refused in 1795 to hand over to the House of Representatives correspondence related to the Jay Treaty with Great Britain by invoking for the first time the doctrine of what would become known as executive privilege. And most importantly, by issuing his Neutrality Proclamation of 1793, announcing that the United States would remain neutral in the war between Britain and France, Washington made it clear that while Congress had the power to declare war the president had the authority to declare American neutrality in the absence of such a declaration.

Washington shaped many other aspects of the presidency that we take for granted today. He created the president’s cabinet (and what a cabinet it was); he fulfilled his constitutional obligation to “take care that the laws be faithfully executed” by suppressing the Whiskey Rebellion of 1794; he established (in concert with James Madison) the precedent that the president alone possessed the power to remove executive branch appointees; and perhaps most importantly, he left a legacy of respect for the new office through his deft blend of accessibility and detachment – Washington’s frequent presidential tours of the nation allowed the people to see their president, although always at a distance. This was not a glad handing president who pandered to the people and tried to win their affection by presenting himself as a “regular guy.” Washington believed that the people wanted to look up to their president, and that a certain amount of awe toward the office, even in a republic, was an attribute that contributed to a respectable government.

George Washington and Alexander Hamilton understood something many modern political scientists do not: that the more you democratize the office of the presidency, the more you diminish it. It is important to note that the constitutional presidency provides both a floor and a ceiling that protects but also energizes the office; without this, the office is trapped in a cycle of raised expectations followed by public disappointment and cynicism.

A century of disregard for the Constitution has damaged our nation’s polity, possibly beyond repair. Too much is expected of the federal government, especially the presidency. Even strong nationalists like Hamilton acknowledged limits to what the presidency should do: it should concentrate on administering the government, conduct foreign negotiations, oversee military preparations, and if need be, direct a war. It should not attempt to democratize the world, comfort the sad, or heal the planet. The prospects are remote that we can roll back some of the more egregious elements of the personalized presidency, since any such effort would be portrayed as an attempt to neuter the presidency. Yet the founder’s “energetic” presidency possessed formidable powers, including the ability to respond to emergencies through the vesting clause; the veto power; the Commander-in-Chief power; the pardon power; the power to receive ambassadors (making him the nation’s chief diplomat); and the shared power over treaties and appointments. A restoration of the constitutional presidency might even force Congress to begin to conduct itself in a manner intended by the framers.  While the prospects for such a restoration may be remote, the hope remains that the American experiment will be restored to full health.


Presidential historian Stephen F. Knott is a member of the WJMI Board of Visitors and a Professor of National Security Affairs at the United States Naval War College. He served as co-chair of the University of Virginia's Presidential Oral History Program and is the author of several books, including Alexander Hamilton and the Persistence of Myth and Rush to Judgment: George W. Bush, the War on Terror, and His Critics.
Posted by J. David Gowdy at 10:19 AM