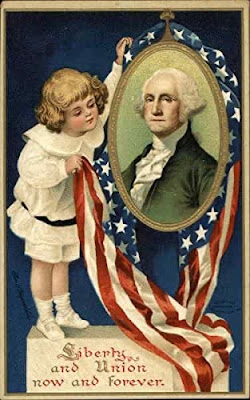 "[Y]our union ought to be considered as a main prop of your liberty, and that the love of the one ought to endear to you the preservation of the other." --George Washington
Unity was indispensable to the formation of our nation and the establishment of the Constitution. George Washington, in his Farewell Address, said: "The unity of government... is a main pillar in the edifice of your real independence, the support of your tranquility at home, your peace abroad, of your safety, of your prosperity, of that very liberty which you so highly prize... it is of definite moment that you should properly estimate the immense value of your national union to your collective and individual happiness... accustoming yourselves to think and speak of it as the palladium of your political safety and prosperity." All three authors of the Federalist Papers proclaimed the benefits of a strong union. James Madison stated: "[E]very man who loves liberty ought to have it ever before his eyes that he may cherish in his heart a due attachment to the Union of America and be able to set a due value on the means of preserving it." Madison also stated: "We have seen the necessity of the Union as our bulwark against foreign danger, as the conservator of peace among ourselves, as the guardian of our commerce and other common interests, as the only substitute for those military establishments which have subverted the liberties of the old world, and as the proper antidote for the diseases of faction, which have proved fatal to other popular governments." John Jay, stated: "[T]he prosperity of America depend[s] upon its Union." Finally, Alexander Hamilton said: "I have endeavored, my Fellow Citizens, to place before you in a clear and convincing light, the importance of Union to your political safety and happiness. I have unfolded to you a complication of dangers to which you would be exposed should you permit that sacred knot which binds the people of America together to be severed." Their messages instruct us that in unity, encompassing more than the mere union on paper of the states, there is mutual strength and safety.
Unity requires adherence to common principles -- a shared vision. Such principles include democratic standards of justice, fairness, equality, and individual freedom of religion and speech, among others. Thomas Jefferson eloquently stated in his Inaugural Address: "[E]very difference of opinion is not a difference of principle. We have been called by different names brethren of the same principle... Let us then pursue with courage and confidence . . . our attachment to union and representative government." In order to create and maintain unity, as evidenced by the very process by which the Constitution was forged, personal opinions must be tempered and often compromised for the benefit of the whole. Thus, the spirit of compromise is essential to the workings of our republican form of government; and the spirit of mutual commitment essential to democracy.
In this regard, the Founding Fathers warned that "factions" are destructive to the Union and to the spirit of unity (Federalist No. 10). What are the prime causes of "the diseases of faction"? Pride, or selfishness, and greed. A proverb states: "Pride goeth before destruction, and an haughty spirit before a fall." (Proverbs 16:18). The central feature of pride is enmity (Benson). Enmity, or animosity, may be pitted against persons or groups in society. Through selfishness, greed and envy, the enmity of pride leads to contentions and strife, causing divisions and factions, thus destroying unity. Humility, gratitude and camaraderie serve as primary antidotes to dispel pride, shield principle and preserve the unity necessary to sustain liberty. "'A house divided against itself cannot stand.'" --Abraham Lincoln (quoting Mark 3:25).
Posted by J. David Gowdy at 8:57 AM