The True Secret and Grand Recipe for Felicity 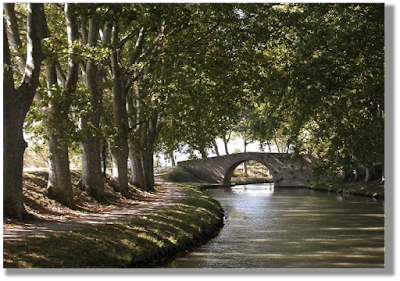 There are many personal letters that could be referenced in regard to Jefferson’s sentiments on the subjects of virtue and morality. A compilation of quotes from such letters found online at “Thomas Jefferson on Politics and Government” under the heading “Moral Principles” totals over seventy-five (75) separate references.[1] However, let us focus on one letter in particular.  Thomas Jefferson wrote this letter to his daughter to Martha ("Patsy") Jefferson on May 21, 1787 from France:

"I write to you, my dear Patsy, from the Canal of Languedoc [pictured above] on which I am at present sailing, as I have been for a week past, cloudless skies above, limpid waters below, and find on each hand a row of nightingales in full chorus. …I expect to be at Paris about the middle of next month. By that time we may begin to expect our dear Polly. It will be a circumstance of inexpressible comfort to me to have you both with me once more. The object most interesting to me for the residue of my life, will be to see you both developing daily those principles of virtue and goodness which will make you valuable to others and happy in yourselves, and acquiring those talents and that degree of science which will guard you at all times against ennui, the most dangerous poison of life. A mind always employed is always happy. This is the true secret, the grand recipe for felicity." [2]

Thomas Jefferson affectionately conveys to Patsy that the “grand recipe for felicity” or happiness, and the object most dear to him for the rest of his life, will be to witness her keeping her mind cheerfully employed and developing daily “principles of virtue and goodness.” As Elizabeth Langhorne has so eloquently observed in her biography “Monticello: A Family Story,” that while his daughter Mary (or “Polly”) passed away at age 25, Jefferson remained most devoted to Patsy throughout his life (and she to him).  Langhorne writes that foremost to Jefferson’s “comforts of a beloved family … of course, was the presence of Martha, who was her father’s housekeeper, his hostess, and his intimate companion.”[3]

After all has been said, this was Jefferson’s dream for his family at Monticello, to establish and maintain a home, just as Palladio had envisioned: “The ancient sages commonly used to retire to such places, where being oftentimes visited by their virtuous friends and relations, having houses, gardens, fountains …and above all their virtue, they could easily attain to as much happiness as can be attained here below.”[4] Thomas Jefferson’s lifelong pursuit may be defined by his statement that, “Happiness is the aim of life. Virtue is the foundation of happiness.”[5]

[1] http://famguardian.org/Subjects/Politics/ThomasJefferson/jeff0200.htm
[2] Jefferson, Writings (The Library of America, New York, 2001), pp. 896-97 [emphasis added].
[3] Elizabeth Langhorne, Monticello: A Family Story (Algonquin Books of Chapel Hill, 1987), p. 163. Martha Jefferson Randolph served as "first lady" with her father from 1802-3 and 1805-6 in the U.S. President's House, later known as the White House. After Jefferson's retirement, Martha and her children spent their time primarily at Monticello, even while her husband, Thomas Mann Randolph, was serving as Virginia's governor (see Monticello Online).
[4] Langhorne, p. 4 [emphasis added].  Jefferson owned “The Architecture of A. Palladio; in Four Books.” (2 vols. London, 1742), and they were the primary source of inspiration for his design of Monticello and the University of Virginia.
[5] Thomas Jefferson to William Short, October 31, 1819, ME 15:219-224.
Posted by J. David Gowdy at 8:24 PM