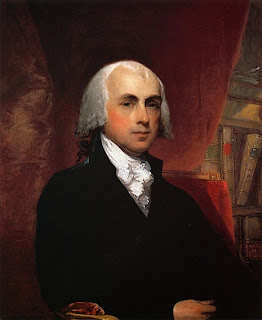 James Madison, Jr. (March 16, 1751 – June 28, 1836) was an American statesman, political theorist, the fourth President of the United States, and is generally regarded as the "Father of the Constitution." His lovely wife Dolley was his gracious and charming political partner (see: "Mrs. Madison's Wednesday Nights").

In honor of his birthday, here are a few favorite quotes.


“[W]e may define a republic to be…a government which derives all its powers directly or indirectly from the great body of the people, and is administered by persons holding their offices during pleasure, for a limited period, or during good behavior…”
Federalist No. 39

“The accumulation of all powers, legislative, executive, and judiciary, in the same hands, whether of one, a few, or many, and whether hereditary, self appointed, or elective, may justly be pronounced the very definition of tyranny.” Federalist No. 47

“The "Federalist" may fairly enough be regarded as the most authentic exposition of the text of the federal Constitution as understood by the Body [Constitutional Convention] which prepared & and the Authorities [state ratifying conventions] which accepted it.” Letter to Thomas Jefferson, February 8, 1825 (Peterson, 1974, 2. page 383)

“If Congress can do whatever in their discretion can be done by money, and will promote the General Welfare, the Government is no longer a limited one, possessing enumerated powers, but an indefinite one, subject to particular exceptions.” Letter to Edmund Pendleton, January 21, 1792 (Madison, I, page 546)

“The government of the United States is a definite government, confined to specified objects. It is not like the state governments, whose powers are more general. Charity is no part of the legislative duty of the government.” Speech, House of Representatives (January 10, 1794)

“To provide employment for the poor, and support for the indigent, is among the primary, and, at the same time, not least difficult cares of the public authority.” Letter to Reverend F.C. Schaeffer, January 8, 1820 (Madison, III, page 162)

“The aim of every political constitution is, or ought to be, first to obtain for rulers men who possess most wisdom to discern, and most virtue to pursue, the common good of the society; and in the next place, to take the most effectual precautions for keeping them virtuous whilst they continue to hold their public trust.” Federalist No. 57

“I believe there are more instances of the abridgment of the freedom of the people by gradual and silent encroachments of those in power, than by violent and sudden usurpations …” Speech at the Virginia Convention to ratify the Federal Constitution (June 6, 1788)

“[T]he right of freely examining public characters and measures, and of free communication among the people thereon…has ever been justly deemed the only effectual guardian of every other right.” Virginia Resolutions, 1798

“[T]o the press alone; checkered as it is with abuses, the world is indebted for all the triumphs which have been gained by reason and humanity over error and oppression.” Madison's Report on the Virginia Resolutions (in the American Memory Collection of the Library of Congress)

“[T]he advantage of being armed, which the Americans possess over the people of almost every other nation, the existence of subordinate governments, to which the people are attached, and by which the militia officers are appointed, forms a barrier against the enterprises of ambition, more insurmountable than any which a simple government of any form can admit of. Notwithstanding the military establishments in the several kingdoms of Europe, which are carried as far as the public resources will bear, the governments are afraid to trust the people with arms.” Federalist No. 46

“A popular Government, without popular information, or the means of acquiring it, is but a prologue to a farce or a tragedy; or, perhaps, both. Knowledge will forever govern ignorance; and a people who mean to be their own governors must arm themselves with the power which knowledge gives.” Letter to W. T. Barry, August 4, 1822 (Madison, III, page 276

“[W]e hold it for a fundamental and undeniable truth, "that religion or the duty which we owe to our Creator and the manner of discharging it, can be directed only by reason and conviction, not by force or violence." Memorial and Remonstrance, 1785

“Among the features peculiar to the political system of the United States, is the perfect equality of rights which it secures to every religious sect…Equal laws, protecting equal rights, are found, as they ought to be presumed, the best guarantee of loyalty and love of country; as well as best calculated to cherish that mutual respect and good will among citizens of every religious denomination which are necessary to social harmony, and most favorable to the advancement of truth.” Letter to Dr. De La Motta, August 1820 (Madison, 1865, III, pages 178-179)

“The belief in a God All Powerful wise and good, is so essential to the moral order of the world and to the happiness of man, that arguments which enforce it cannot be drawn from too many sources nor adapted with too much solicitude to the different characters and capacities to be impressed with it.”  Letter to Rev. Frederick Beasley (November 20, 1825)