Henry Knox and the Cannon of Fort Ticonderoga 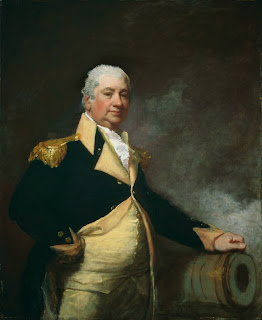 On January 26, 1776, former bookseller Henry Knox arrived at George Washington’s headquarters in Cambridge, Massachusetts, with 60 tons of captured artillery to use in the liberation of Boston from British forces. Knox had masterminded the removal and transportation of the guns from Fort Ticonderoga in upstate New York, through over 300 miles of sparsely populated terrain in the dead of winter. [1]

Knox went to Ticonderoga in November 1775, and, over the course of three winter months, moved 59 cannons and other armaments by boat, horse and ox-drawn sledges, and manpower, along poor-quality roads, across two semi-frozen rivers, and through the forests and swamps of the lightly inhabited Berkshires to the Boston area.

On December 17, 1775, Knox wrote to Washington from Lake George, New York, describing the difficulty of transporting the cannon and mortars: “It is not easy [to] conceive the difficulties we have had in getting them here over the Lake owing to the advanc’d Season of the Year & contrary winds, but the danger is now past; three days ago it was very uncertain whether we could have gotten them untill next spring, but now please God they must go – I have had made forty two exceeding Strong Sleds & have provided eighty Yoke of oxen to drag them as far as Springfield.”

Historian Victor Brooks has called Knox's exploit "one of the most stupendous feats of logistics" of the entire American Revolutionary War. [2]

“What was heroic in this expedition was that it was a stroke of inspiration, coupled with good timing, skilled logistics and luck. And by this stroke, the British Army was forced to relinquish its hold on one of the great American cities. In a time when proofs of potential victory were precious few, this single event did more than most to energize and inspire the Revolution.”  (New York Knox Trail History).

In March 1776, Washington seized Dorchester Heights (the key to Boston) and Knox placed the cannon in position there.  British General Howe realizing the danger of an impending American bombardment, withdrew his troops from the city. On March 17, he embarked his troops for Halifax. Boston was entered the following day by triumphant Americans. [3]
____________________________
[1] "Noble Train of Artillery" http://en.wikipedia.org/wiki/Noble_train_of_artillery
[2] Brooks, Noah, Henry Knox, a Soldier of the Revolution: Major-general in the Continental Army, Washington's Chief of Artillery, First Secretary of War Under the Constitution, Founder of the Society of the Cincinnati; 1750–1806 (New York: G.P. Putnam's Sons., 1900), p. 210.
[3] "Historic Valley Forge" http://www.ushistory.org/valleyforge/served/knox.html