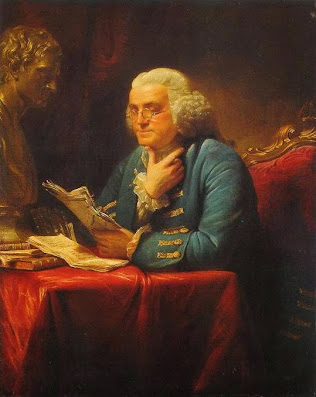 Benjamin Franklin was born on January 17, 1706.  Franklin was a leading American author, printer, political theorist, politician, postmaster, scientist, musician, inventor, statesman, and diplomat. He was the only Founding Father to sign the Declaration of Independence, the Treaty of Paris with Great Britain, and the Constitution. Here are a few quotes from this wise and great man (many of which were published under a pseudonym in his popular Poor Richard's Almanack), and which after more than two centuries still ring true.


“A penny saved is a penny earned.”

“An investment in knowledge pays the best interest.”

“Anger is never without a reason, but seldom with a good one.”

“Any fool can criticize, condemn and complain and most fools do.”

“Be slow in choosing a friend, slower in changing.”

“Beware of little expenses. A small leak can sink a great ship.”

“By failing to prepare, you are preparing to fail.”

“Certainty? In this world nothing is certain but death and taxes.”

“Creditors have better memories than debtors.”

“Diligence is the mother of good luck.”

“Do good to your friends to keep them, to your enemies to win them.”

“Do not fear mistakes. You will know failure.”

“Do not squander time for that is the stuff life is made of.”

“Energy and persistence conquer all things.”

“Experience is a dear teacher, but fools will learn at no other.”

“Guests, like fish, begin to smell after three days.”

“Half a truth is often a great lie.”

“He who falls in love with himself will have no rivals.”

“Hide not your talents. They for use were made.”

“If you would be loved, love, and be loveable.”

“It is easier to prevent bad habits than to break them.”

“It is much easier to suppress a first desire than to satisfy those that follow.”

“It takes many good deeds to build a good reputation, and only one bad one to lose it.”

“Keep your eyes wide open before marriage, half shut afterwards.”

“Marriage is the most natural state of man, and... the state in which you will find solid happiness.”

“Life's Tragedy is that we get old to soon and wise too late.”

“Money has never made man happy, nor will it, there is nothing in its nature to produce happiness. The more of it one has the more one wants.”

“Observe all men, thyself most.”

“One today is worth two tomorrows.”

“Speak ill of no man, but speak all the good you know of everybody.”

“Tell me and I forget. Teach me and I remember. Involve me and I learn.”

“There was never a truly great man that was not at the same time truly virtuous.”

“They who can give up essential liberty to obtain a little temporary safety deserve neither liberty nor safety.”

Always I love Benjamin Franklin quotes. Also I have collected many quotes from you. Thanks for sharing!!