"We Hold These Truths to be Self-Evident" 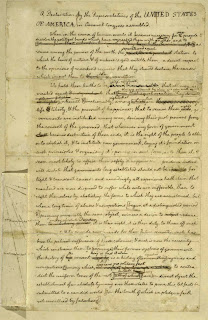 On June 7, 1776, Richard Henry Lee, following the instructions of the Virginia Convention, introduced a resolution at the Continental Congress in Philadelphia “that these United Colonies are, and of right ought to be, free and independent States, that they are absolved from all allegiance to the British Crown, and that all political connection between them and the State of Great Britain is, and ought to be, totally dissolved.”  The Continental Congress adopted Lee’s resolution and then appointed a committee of five – John Adams, Benjamin Franklin, Roger Sherman, Thomas Jefferson, and Robert Livingston – to turn the resolution into a declaration of independence.  Adams took charge and promptly assigned Jefferson to write a draft.

Jefferson did not want to do it.  He watched Lee depart for home and longed to follow him.  He was convinced that what was going on in Williamsburg, where the Convention’s delegates were drafting a constitution for the newly independent commonwealth, mattered more than what was going on in Philadelphia.  Jefferson had even written a draft constitution that he hoped the Convention would adopt.

One.  That he was a Virginian and I a Massachusettensian.  Two.  That he was a southern man and I a northern one.  Three.  That I had been so obnoxious for my early and constant zeal in promoting the measure, that any draft of mine, would undergo a more severe scrutiny and criticism in Congress, than one of his composition.  Fourthly and lastly that would be reason enough if there were no other, I had a great opinion of the elegance of his pen and none at all of my own.

Adams' arguments, Jefferson had to admit, made sense.  Jefferson went to work and, a day or two later, produced a draft of what would become the Declaration of Independence.

How he managed to write, in a matter of a day or two, the words that more than any others made America has been the subject of much debate.  Part of the answer is he didn’t start from scratch.  He had with him in Philadelphia, and he clearly drew from, his own previous writings, including his 1774 Summary View of the Rights of British America, his 1775 “Declaration . . . Setting forth the Causes and Necessity of their taking up Arms,” and his draft of a constitution for Virginia.  He also had others’ recent works at hand, most notably a draft of Virginia’s Declaration of Rights, which was written by George Mason and adopted with amendments in the Virginia Convention.  Mason’s declaration opened by stating: “That all men hare born equally free and independent, and have certain inherent natural rights, of which they cannot, by any compact, deprive or divest their posterity; among which are the enjoyment of life and liberty, with the means of acquiring and possessing property, and pursuing and obtaining happiness and safety.”  Jefferson’s most famous words were clearly derived from Mason’s.

Jefferson also drew from works that he did not have at his side in Philadelphia.  He was familiar with the writings of seventeenth-century English writers, including John Milton, Algernon Sidney, and above all, John Locke, who set forth a doctrine of natural rights in his Second Treatise of Government.  He may also have drawn from Scottish philosophers, especially Francis Hutcheson.

Jefferson submitted his draft to Adams and Franklin, who made a few changes, among them that the rights Jefferson had declared to be “sacred and undeniable” were instead “self-evident.”  The committee then sent the document on to the Congress, which made a total of eighty-six changes.  Most involved cutting (about a quarter of Jefferson’s text was eliminated), but the Congress also played with Jefferson’s language, for example changing “inherent and inalienable rights” to “certain inalienable rights.”  “Inalienable” later became “unalienable,” probably when the Declaration was printed.  Thus, the words in their most familiar form: “We hold these truths to be self-evident, that all men are created equal, that they are endowed by their Creator with certain unalienable rights, that among these are life, liberty, and the pursuit of happiness.”

But – with so many sources and so many editors – was the Declaration truly Jefferson’s?

Adams, who was admittedly jealous of Jefferson, later wrote that there was “not an idea in it, but what had been hackneyed in Congress for two years before.”  Jefferson denied he had copied any other writing: “I turned to neither book nor pamphlet while writing it,” he insisted in an 1823 letter to James Madison.  Jefferson did not deny, however, that the words of others, past and present, were on his mind.  Indeed, it would hardly have been possible to secure Congress’s support for independence had Jefferson’s words not been, as he put it in an 1825 letter to Henry Lee, “an expression of the American mind.” His purpose, he explained to Lee, had been “not to find out new principles, or new arguments, never before thought of, not merely to say things which had never been said before; but to place before mankind the common sense of the subject, in terms so plain and firm as to command their assent.”  The Declaration’s authority, Jefferson rightly added, “rests . . . on the harmonizing sentiments of the day, whether expressed in conversation, in letters, printed essays, or the elementary books of public right, as Aristotle, Cicero, Locke, Sidney, etc.”

To later generations of Americans, the most important principle pledged in the Declaration was that of equality.  Most famously, in his Gettysburg Address, Abraham Lincoln looked back four score and seven years ago to 1776, the year “our fathers brought forth on this continent a new nation, conceived in liberty, and dedicated to the proposition that all men are created equal.”